Paper Mill in Duszniki-Zdrój is part of the Tentative list of Poland in order to qualify for inclusion in the World Heritage List.

The Paper Mill in the spa town of Duszniki-Zdrój is one of the oldest preserved paper mills in Europe. It was erected in the 16th century and characterized by a wooden shingled roof, by a baroque volute and wall paintings in the interior dating back to the 17th century. The paper mill is nowadays preserved as a museum and still produces traditional hand-made paper.

Map of Paper Mill in Duszniki-Zdrój 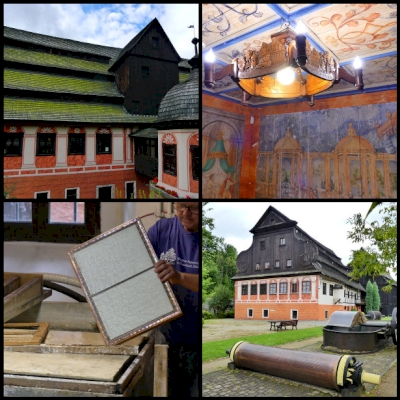 I visited this tentative WHS in August 2020. The 17th century paper mill in Duszniki-Zdroj is only 1.5hrs away from the Church of Peace WHS in Swidnica or the Centennial Hall WHS in Wroclaw.

This paper mill environment is very similar to the Derwent Mills WHS in the UK even though the two-lane road leading to the town is much closer to the mill. If you visit by car, there is free parking a couple of metres before the mill proper next to a huge Chopin graffiti. The mill seems to be quite popular especially among Poles and already at 9am I wasn't the only one waiting to go in. From November to April it is open every day except Mondays, while during the rest of the year it is open every day. The paper-making demonstrations usually only start at 10am.

This paper mill combines fragments of the building from the mid-16th century extended in 1605 with the remaining part of the ground floor as well as the three storey attic. Paper was manufactured in the basement and dried in the attic. The ground floor served administrative and residential purposes. Since the paper mill belonged to noblemen, in the early 17th century it was given the form of a traditional manor house. In the 1740s, the western facade was adorned with a characteristic volute gable and on the eastern side a vast wooden drying room was added.

The entrance pavilion in the shape of a tower was erected in the 1760s. In 1802, rosettes and semi-rosettes were painted over and between the windows as well as on some of the walls, and on the western facade three mock windows were painted next to the other four real windows to maintain harmony with the rest of the mill. The mill in Duszniki-Zdroj is the only paper mill in Poland still in operation. In 1969, on the first attic level of the mill, under decorticating paint, beautiful polychrome paintings were discovered probably dating back to the 17th-18th century. They really reminded me of the unforgettable experience I had last year when visiting the Decorated Farmhouses WHS in Sweden.

Although the paper mill now houses the Museum of Paper-Making, it is still the major manufacturer of handmade paper in Poland. It is used for making notepaper and envelopes for example for the curia as well as prints for special occasions. As a trivia, what is called as elephant paper is also prepared here in collaboration with the zoo in Wroclaw and make for a peculiar souvenir from the gift shop. The raw material is rinsed for many hours in order to remove all parts digested by elephants so as to get rid of any unpleasant odours. The Paper Mill suffered from a large scale flood in 1998 (there are shocking photos downstairs where the handmade paper-making demonstrations take place.

The museum audio guide is actually very interesting and takes about 45 minutes in all. In the first room you get an in-depth overview of the history of paper-making in the world, the different writing materials prior to the invention of paper and the invention of printing. In the second room and third, the focus is on the origins and development of paper-making in Poland. In the fourth room, you'll get a very detailed overview of the history of machine paper-making with possibly one of the best collections of different paper-making machines and related tools in Europe if not worldwide. In a way, the different polished hand-operated tools and measuring apparatus (ex. for measuring paper resistance to double folding, resistance to bursting, tensile testing, etc.) reminded me of the excellent Struve apparatus collection in the Tartu Observatory in Estonia.