Wooden Roofed and Wooden Columned Mosques in Anatolia is part of the Tentative list of Turkey in order to qualify for inclusion in the World Heritage List.

The Wooden Roofed and Wooden Columned Mosques in Anatolia comprise five mosques in different towns. The use of wood in mosques was brought from Central Asia to Anatolia in the 11th century. The interiors of the mosques also have colorful geometrical and floral paintings.

Map of Wooden Roofed and Wooden Columned Mosques in Anatolia 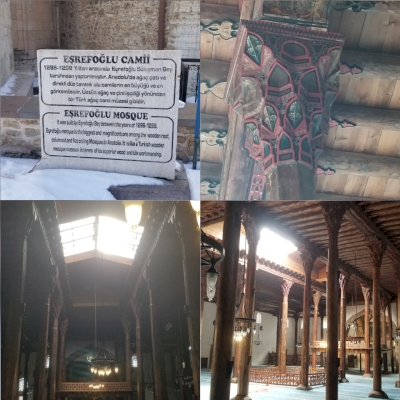 Although the most obvious visit may seem the mosque in Ankara I wanted to do as little as necessary in the capital. While road tripping I visited the Hittite spring nearby Eşrefoğlu Mosque but even with two sites to visit it hardly makes it worth a side trip, especially 2h from Konya and back doesn't seem worth it at all.

The laid-back town has almost no traffic and plenty of parking around the mosque. There is a sign for prayer but it was open and not a soul inside. Like most bigger mosques in Turkey there is a woman's section leading around the back and and up to the balcony, which I'll refer to as the VIP seats to make myself feel better about it.

As there was nobody in the mosque I took some pics from the entrance before ascending. In this case the roof can be seen better from up there anyway.

While I think the craftsmanship is solid and well done, I don't think they quite have the same class of wooden churches in Eastern Europe, and I'm not entirely sure how re-roofed these are now. It's been over 700 years since they were built and I can't see these wooden beams being original.