Île d'Anticosti is part of the Tentative list of Canada in order to qualify for inclusion in the World Heritage List.

Anticosti Island is situated in the Gulf of Saint Lawrence. The island’s 1 km thick limestone illustrates a critical turning point in the history of life on Earth: the virtual disappearance of life in the oceans at the end of the Ordovician and Silurian Periods, 435-450 million years ago. The island constitutes as the world’s best source for the study of fossils and sedimentary strata resulting from this first mass extinction. 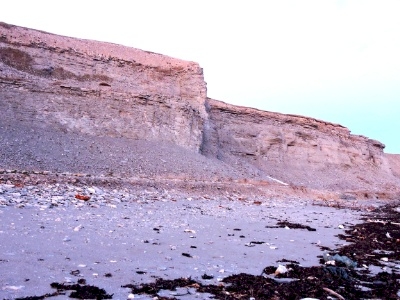 It is my understanding that the nomination of Île d'Anticosti, a large island in the Gulf of St Lawrence, is primarily supported by its being one of the premier locations for obtaining fossilized life from the Silurian epoch. If inscribed, the site will join several other Canadian fossil WHSs, and will share several features with those other sites. I was not able to determine exactly what the proposed boundaries of the site would be, or whether the site would include the entire island. From readings I did before arriving, it seems that fossils are often found wherever there is a rocky outcropping, especially at seaside cliffs and riverbanks. So it may be that most, or all, of the island is being nominated. The coordinates given on the UNESCO page for the site point to the western tip of the island, close to its one small village, which is where I made a brief visit. As of now, only a relatively small section at the center of the island is protected as a National Park.

Only an experienced paleontologist would be qualified to speak on the quality and number of the fossils present on the island, and whether they merit inscription on the list. However, there are two other situations that could affect this site’s chances of inscription. Over one hundred years ago, deer were introduced onto the island, which proliferated, and currently support the only significant tourism there. Specifically, hunters, who visit in relatively small numbers and stay in a few scattered wilderness lodges. I would think that this should not interfere with the island being a WHS, since their presence would not be likely to harm the fossil beds significantly. A more serious issue is the potential for extracting natural gas from the island through Fracking. Several years ago, the process of starting that industry on the island began, but was later halted after pressure was applied from members of the public. This industry could significantly endanger the legitimacy of the island as a WHS, and opinions among the local population appear to be divided on the issue. Those who support inscription hope that if the site is listed it will eliminate the possibility of that extractive industry starting on the island, once and for all.

If the site is inscribed, it will likely never be an easy site to visit. As of now there are only three ways to reach the island. Infrequent small aircraft serve the island, but these are expensive, and primarily used by the hunters (so you may need to share the cabin with deer carcasses on the return flight.) There is said to be a small marine vessel which serves the eastern end of the island, connecting with the Gaspe Peninsula, but I did not learn much about that option.

The most user-friendly method as of now is the vessel N/M Bella Desgangne (http://relaisnordik.com/en/) a mixed cargo and passenger ship that makes a weekly circuit of the remote villages along the shore of Gulf, and calls twice a week at Port Menier, at the western end of the island. This was the method I used, and I had two hours on a chilly evening to explore the village, which was just enough time to visit a nearby cliff that was shedding slate in prodigious amounts, and would seem to be a suitable location to find fossils (pictured here.) After searching though the loose stones below, I found one piece with a odd-looking indentations that suggested that it could possibly be something that resembles a piece that gave the appearance of an object that might be a fossil (but probably wasn’t.)