Amami-Oshima Island, Tokunoshima Island, the northern part of Okinawa Island and Iriomote Island is part of the Tentative list of Japan in order to qualify for inclusion in the World Heritage List.

Amami-Oshima Island, Tokunoshima Island, the northern part of Okinawa Island and Iriomote Island currently harbour diverse fauna and flora that are characterized by high proportions of endemic and rare species such as the Iriomote leopard cat. The proposed property accounts for less than 1% of the whole land area of Japan, yet it accommodates about 17% of the nation’s endangered vascular plants. 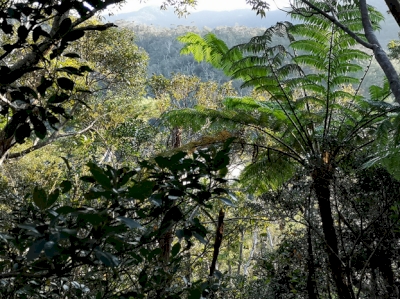 This TWHS had quite positive recommendations from IUCN in 2018. After deferral, I believe that the modified nomination that followed all the recommendations has high chance to be inscribed in 2020. It consists of 4 islands (Amami-Oshima, Tokunoshima, Northern Okinawa, and Iriomote) covered by subtropical forest southwest from Japan mainland. In original nomination, it was proposed for criterions (ix) ecological processes and (x) biodiversity and endemic species. New nomination for 2020 focuses only on the criterion (x), since the islands represent biodiversity hotspot of isolated islands in Pacific Ocean with numerous endemic and endangered species such as Amami rabbit, Okinawa rail, Okinawa woodpecker, Amami woodcock, Iriomote cat, and several kinds of endemic rats, turtles, lizards, newts and frogs among others. It is clear that animal species are not very spectacular, thus I do not expect that this site will be overwhelmed by tourist industry even after the inscription.

I visited only Okinawa component (partly in March 2016 – see my “un-official” review below, and more thoroughly in November 2019), but I would like to visit more islands in the future. Actually, Northern parts of Okinawa Island is the most problematic component because of the issue with the US military training areas. Some areas were returned to Japan very recently and joint to Yanbaru National Park as well as to the core zone of the nomination, but it is still a controversial point.

In November 2019, I spent 2 days/3 nights in Yanbaru National Park in the area of Okuma Village, which is accessible by public transport (bus 67 from Nago), and buffer/core zones can be visited from there. The Northern Okinawa is surprisingly quite touristy area, but it is mostly visited by “active” tourists with rent-car that go only to few popular places such as Hiji waterfalls (already in the buffer zone of TWHS), very impressive Cape Hedo (not included to TWHS), and picturesque karstic landscape Daisekirinzan (it was removed from the core zone in the revised nomination as it is only small isolated spot that brings nothing to OUV). The core zone covers central strip of forested hilly landscape of Yanbaru NP, sandwiched by the buffer zone on the West and North, and US military training area on the Pacific side. Only few local roads cross the core zone, and only official trail that goes to the core zone is that of Mt Yonaha.

What I could see that express OUV of this TWHS:

In my opinion, OUV of this site lays in the endemic creatures and plants living in their natural environment. It means that it is not enough just to visit the forest but one should spot the creatures or at least be aware of their appearance and existence.

(i) We were accommodated in Yonaha Dake Pension called after the highest peak of Okinawa - 503 m high Mt. Yonaha. The pension is located very close to the borderline of the buffer zone. We got off at the Okuma beach iriguchi bus stop, and than it was 2-3 km uphill... There are magnificent views from the pension over forested hills of the buffer zone as well as towards Okuma coast and islands around Motobu peninsula. Watching a sunset was really strong experience not mentioning huge Ryukyu flying foxes above our heads!

(ii) Just in front of the bus stop, there is large “Kunigami Village Tourism & Local Product Center” and also a big caricature statue of Okinawa Rail non-flying bird – signature animal of this TWHS component. In the Center, one can buy numerous leaflets, postcards and souvenirs more-or-less related to Yanbaru NP and animals living in the area such as T-shirts with Okinawa rail etc. Further in the North on the Pacific side, there are Okinawa Rail Ecology Center and Yanbaru Discovery Forest, but I had no opportunity to visit. It means that Yanbaru NP and its endemic animals have a massive promotion that is very positive. However, I have not noticed any signs advertising UNESCO nomination.

(iii) The first day, we walked from the pension towards the core zone by local asphalt road that entered the buffer zone very soon. Just at the beginning of our trip, we spot a bird that run rapidly across the road, but we could see its brown back only for few seconds. I am pretty sure that it was Okinawa rail (or alternatively Amami woodcock but it should be active durning night only)!!! but it was too dark and for few seconds to distinguish. Though it was first&last rail we could see so far, I was thrilled and very happy. The population of non-flying Okinawa rail should be around 1500 birds. We saw "our" rail (woodcock) already on the outer border of the buffer zone.

(iv) Following the road, we came to the trailhead of Mt. Yonaha after few kilometers. The mountain is the central point of TWHS core zone. There were numerous banners and instructions what to see and how to behave in this strictly protected area. This is the only official trail that goes to the core zone. The forest interior with brooks and stones covered by lichens and ferns is very impressive, but there are almost no views because of dense vegetation. Thus, it might be boring for some visitors. The summit of Yonaha (503 m) is not marked. Instead there is a triangulation point a bit lower in 498 m. Unfortunately, there were almost no flowers in blossom in November, and interestingly, it was very silent with no birds and cycads around the summit. The only limited view was around the highest part (503 m) towards the Pacific and US military training area.

(v) From the Mt Yonaha trailhead, we also walked along the asphalt roads to both directions to the North towards the intersection with another road, and to the South to the bridge over the Hiji River (which we enjoyed more). The traffic is very infrequent that is very pleasant. All the time the road goes in the buffer zone. Time to time, there are views on both sides of the road to surrounding buffer/core zones as it goes close to the borderline between them. I must say that I enjoyed walking on these roads in the buffer zone more than the hiking the trail to Mt Yonaha in the core zone, because of views to surrounding forested valleys and of bigger diversity of vegetation (tree ferns, broccoli trees, etc.) Just 1-2 km from the Mt Yonaha trailhead, there is miraculously a small building of book-cafe Okinawa Rail, unfortunately closed in November! My highlight was the Hiji River Bridge that is exactly at the border between core and buffer zones (PHOTO – view from the bridge towards the core zone).

(vi) The second and last day, we walked from the pension down to Okuma and turned to the marked road towards Hiji Great Waterfall. There is small visitor center (fee 500 JPY) with a camping place and of course large parking lots. The Hiji Fall trail is open daily 9-17h in summer and 9-15h in winter (November to March) and it is entirely located in the buffer zone. Walking along Hiji River in the forested valley with very nice views all around is very pleasing. The waterfall itself is quite nice but it does not express OUV of the site.

In conclusion: as demonstrated by 6 points mentioned above, I experienced OUV of this site and I hope it will be inscribed in 2020! I think that the best way to explore the site is to walk alongside roads crossing over buffer zones (few of them also over the core zone), and the Hiji River bridge is my favourite place! I also think that visiting of buffer zones only might be OK to fully enjoy OUV of this site. We spot one Okinawa rail/Amami woodcock, one Ryukuy wild boar, a newt, a snake, several birds, butterflies and flying foxes, all in the buffer zone, – is it a little or a lot?? 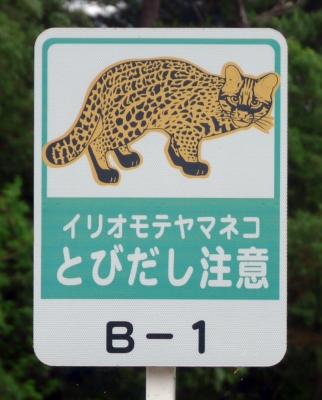 Iriomote is usually a day trip from Ishigaki by ferry. Whereas it is possible to stay longer it is not easy to figure out accomodation. Best and easiest way to see the forest is the boat tiur to the waterfalls. Along the way is a Japanese guide and you can try to follow with English notes but most people got lost really quickly. It is still beautiful on the way. Once you arrive the tour continues as a hike for about 2h which is rather muddy and steep at points. That is why you got boots at the start of the tour. You will be rewarded with great views at the lookout points where you can have a rest. Some people only walked to the first stop and back. The time is a little tight to see both anyway. The guides also did not accompany you as they go back and forth with other guests.

The most sought after sight on the island are the endemic Iriomote cats, a subspecies of leopards only found here. They say the chance to see one is really low. They are protected and the numbers have plummeted before protection but they are still really shy animals.

I visited Okinawa island in March last year. According the locals, March-April would be the best time to visit and explore the island in order to avoid winter cold, summer hot&humidity, monzoon of May, and typhoons of fall.

The Yanbaru forest is located in the norden part of the island, and Nago is the best place to stay&go further to north. This part of the island is quite remote, and due to the infrequent public transport - which I used to visit Hiji falls protected area, renting a car would be better and more efficient alternative.

It was a bit rainy day, however for visiting of subtropical rain forest it was an appropriate choice...

I like very much such areas, and I can compare my experience to Laurisilva of Madeira, or in a certain extent also to beech forests of Slovakia (both are WHS). So, I enjoyed my visit a lot, but I have to admit that no everyone would enjoy seemingly boring densely forested areas with a minimum of viewpoints or spectacular flora and fauna.

In the summary, I strongly support the inscription to protect the forested area inhabited by numerous endemic species that might be endangered mainly by military preasures in the area.