Koloniën van Weldadigheid (agricultural pauper colony) is part of the Tentative list of Netherlands in order to qualify for inclusion in the World Heritage List.

The Colonies of Benevolence is a relict cultural landscape of isolated peat and heath wastelands that were colonized in the 19th century in a model for pauper relief. The included components in the Netherlands are Frederiksoord-Wilhelminaoord and Veenhuizen. The first was a free colony (founded by The Society of Humanitarianism to help poor citizens), the latter an unfree colony (where people were sent by the State and had to live under a more strict regime). 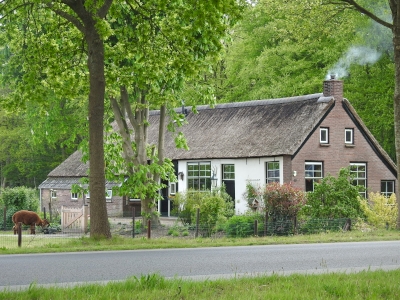 The former Colonies of Benevolence will be on the agenda of the WHC 2020 meeting. This Dutch-Flemish serial transnational proposal had been referred in 2018 due to doubts about the selection of sites included. Subsequential discussions with ICOMOS and the World Heritage Centre, advising to “take a little more time” than usually after a Referral, has led to a reduction of the proposed locations from 7 to 3. On the Dutch side, Ommerschans and Willemsoord are omitted and Frederiksoord and Wilhelminaoord are combined. In Flanders Merksplas has been dropped, leaving only Wortel.

Wilhelminaoord has a well-preserved Colony Church. I was pleased to find it open – only 3 visitors were allowed in at the same time due to the Corona virus measures, but at this early hour there was noone anyway. The protestant church was built in 1851. Church attendance was mandatory in the Colonies, to promote moral standards among the poor. Furthermore, Wilhelminaoord has preserved a weaving mill, which offered alternative employment to colonists who could not do the hard agricultural labour anymore and also two homes for the elderly.

The Nomination Dossier frames the Colonies as a panoptic institution – the colonists were permanently observed and disciplined. Alcohol was forbidden for example, and to prevent them from going to the next town the colony had its own currency which wasn’t valid in the outside world. The ‘panoptic’ approach apparently is visible in the landscape as well: roads and supervisors’ buildings were strategically placed to keep an eye on everyone. What surprised me however how forested this area is. The walk goes via forest lanes for about a third of its route – which makes it a very pleasant walk but I don’t know how it fits into the story. 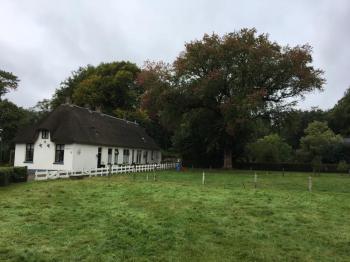 If you’re looking for perfect photo opportunities, this is not the sites for you. It is just a countryside. But the value of this nomination lays in its history. I have visited 3 (Frederiksoord, Wilhelminaoord, Willemsoord) of 7 components, all not very far from Steenwijk, the town that can be reached from Amsterdam by train. I think the best way is to start in Frederiksoord (take the bus 19 from the Steenwijk train station) where a small museum is open. The museum itself is a bit disappointing, ‘cos they have only one small building with some expositions, mostly with pictures, but at least you can hear and watch an audio-visual presentation about Johannes van den Bosch and the beginning of the colonies. Another bad thing is that they do sell only Dutch publications and nothing in English. After visiting the museum I made a tour of the first colony – Frederiksoord; it is where everything started. Among others you can see here Westerbeek house, the headquarters of the Society of Benevolence from 1818 till now. (The building itself is older the Society, it was constructed in XVII century for Jean François van Westerbeek, the commander of the fortress in Steenwijk, and then it passed to the van Royen family (silk traders) before being sold to van Bosch.) The other interesting buildings are two schools: forestry and horticultural, Frederiksoord hotel (which was built before the Society’s guests started coming to visit the area) and de Bakkerij (now B&B); hotel and B&B are the only building you can enter, although nothing from the beginning of the colony remains. But in Frederiksoor the are still some oldest farmhouses, housing for officials, a canal and the road system. The most important attributes of Wilhelminaoord are the school for children from the colony (picture), the church with a priest house, a cemetery and a house for the old people. This colony is located just north of Frederiksoord and the road linking both is also included into the core zone. The third colony I visited is Willemsoord, 7 km from Wilhelminaoord, so you can hike or ride a bike. This one is the smallest of the three and the remains to see are less interesting: just some ditches, a farm and a Jewish cemetery.

All three colonies were so called free ones and it means that I have to come back to see at list one of the unfree in the future.

The nomination file can be downloaded from https://www.kolonienvanweldadigheid.eu/sites/default/files/CofB_I_NominationFile.pdf

Transboundary with Belgium, after being on the Dutch T List since 2011