Deer Stone Monuments, the Heart of Bronze Age Culture is part of the Tentative list of Mongolia in order to qualify for inclusion in the World Heritage List.

The Deer Stone Monuments proposal comprises three sites in central Mongolia with more than 160 deer stones and numerous khirgisuurs, burials, and petroglyphs. The monuments date from the 3rd to the 2nd millennium BCE. The sites represent religion, sacrificial ritual, and funeral practice of the Central Asian Bronze Age nomads. 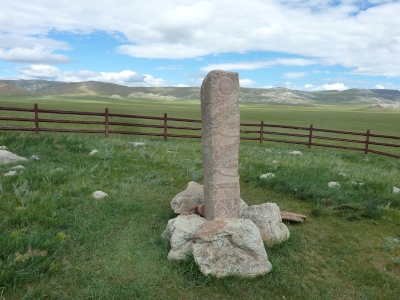 Disclaimer: at first I was convinced I had visited exactly one of the three sites of this TWHS, but then, after better checking, it seems that in mid-August 2018 I was at a smaller field of deer stones of which I can't remember the name between Khatgal (the town on the Khövsgöl lake) and Mörön and near to the Erkhel lake (Эрхэл нуур), not far from the proposed one of Uushgiin övör (Уушгийн өвөр). It was off the beaten track and not so easy to find, but still not so distant from the main road (and of course absolutely no signs). Since the deer stones there are of the same kind as in the other sites and in the same area, I think I can count this as a "visit".

In fact, the official proposal as it stands now probably tries to limit the wealth of such monuments, that one finds scattered in all of Northern Mongolia, just to the most iconic and extended groups. I think, though, that it would make a lot of sense and also benefit the proposal to list other minor, but not less interesting nor significant, sites. It would also give a better sense of the magnitude of this heritage.

That said, I am absolutely favourable to the inscription of deer stone (= буган чулуу/bugan chuluu) monuments in the definitive WHS list, and I think that there are quite good possibilities now that it has been nominated for 2020 (if some kind of WHC session will ever take place this year... and in that case we might already know what has been decided when this review comes out). For me personally, the artistic value of these stelae might outweigh their already conspicuous historical value. These sinuous, running, flaming deers are incredibly evocative in their timeless design, and it seems clear that they were drawn as works of art beyond their symbolic importance. You can imagine these animals springing out and running in the vast valleys an over the hills around the stele, and the ancient nomads chasing after them and maybe following the best exemplars as divine messengers. There are other symbols, too, like moons or more abstract motifs, but it is really the deers that catch the eyes (there were no human faces in the field I saw). And by the way, it is notable that such monuments have survived the centuries: in these lands with unforgiving weather, constantly roamed by populations ("Central Asia is an ocean made out of land where populations are the waves", Fosco Maraini, a famous Italian ethnologist, more or less wrote), where bigger and smaller cities have risen and fallen leaving no or little trace (Karakorum was not the only one), many deer stones still resist and are clearly readable. And so we come also to their historical value: whereas in other places (Kazakhstan, Turkmenistan, and on till Europe...) there are many burial mounds of such "animal style cultures" and wonderful jewelry has been found, here in Mongolia you find these markings of sacred or important places, something visible, full of life, for the living ones, exactly where they have always been, and maybe where everything has started. I don't know if the identities of these people are really known: we can barely reconstruct much more recent movements, such as those of Turks and Mongols in the 1st millennium CE, and the original relations between them, so I suspect that Bronze Age is out of reach. Deer stones are among the few witnesses of this era and guard landscapes of great natural beauty.

The proposed sites date back to the Bronze Age, but here and there there are also later stone monuments like the "man stones" or balbal (хүн чулуу, балбал): I don't know if their inscription is warranted or would be just "too much", but they would fit well with the overall theme. On the other hand, other monumental sites like that of Kül Tegin and Bilge khaan "near" Kharkhorin are really just too distant in time and goal.

In most cases, there is awareness of these monuments, so that many "clusters" are kept in a good state and seem to be respected in some sense. The one I visited was fenced, there was a decorative entering wooden arch, and even an outhouse in its proximity (I found this very nice). To reach them, you need your own transportation and local drivers. As always in Mongolia, it might be tricky to find them if you don't know where to look, but I recommend to anyone passing in the northern/western regions, especially Khövsgöl, Arkhangai, Bulgan, to organize the trip so as to include major or minor deer stone sites, as they are highlights of long, possibly uneventful transfers. One strategy can be to just ask local people: most probably, they can point you to some. Have a good exploration!

To provide a integral narrative for the OUV statement