Great Spas of Europe (France) is part of the Tentative list of France in order to qualify for inclusion in the World Heritage List.

The Great Spas of Europe are a group of eleven spa towns from seven countries that represents the development of European spa tradition from its roots in the antiquity to the peak in the 19. and early 20th century. The French part Vichy is the most renowned spa town of the country. Most of the spa buildings were constructed in the mid-19th century, when the spa town was entirely remodelled. All the important spa buildings and thermal baths, the pumping rooms and covered promenades, the theatre, the casino, and many luxury hotels and villas are located close to each other along the river Alliers. 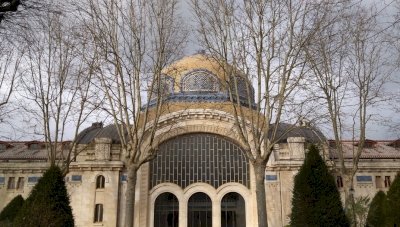 As a Japanese who grew up taking a hot bath every evening (like everybody else does in Japan even today), I have a predilection for spas, although, living in Europe, I hardly get to soak in "hot" water.

11 spa towns from 7 countries in Europe are joining forces to become one WHS, and Vichy is solely representing France.  I was staying for 2 nights in Clermont-Ferrand in February 2020, and one afternoon I took a train for 30 min. to visit Vichy.

I first walked to the Hall des Sources in the Parc des Sources for "tasting" of the spa waters.  The hall is not attended, but you can taste several different kinds of water as much as you want for free, and the most locals bring their own bottles. The water called "Celectine," with the least taste, had the best taste.

Then I walked around the Parc that included a quite beautiful former casino / current congress hall and a working opera house.

Then headed to the grandiose Thermes Les Dômes (Photo).  This is where you can actually soak in water in a historic (but somewhat dilapidated) setting for 15 Euros.  But at 15:00 I was told that the facility was full and was not taking in anymore guests that day. They suggested that I go to the nearby Celestins Thermal Spa.

There I went to find out that it was a modern facility where you can enter for 30 Euros. I was not actually planning to do this, but upon finding out that the entrance fee includes a bath towel, a robe and a pair of sandals (or rather plastic slippers), I entered on a spa-of-the-moment decision. At least this facility uses the real local spa water. I was also told that the Celestins Thermal Spa was a 5-star spa facility while Thermes Les Dômes was a 2-star. After hearing this I was no longer sure if I should have entered the Thermes even if they had allowed me to.

After putting on the robe in the locker room, I entered the pool / sauna area.  But instead of dropping my robe, my jaw dropped. Everybody in the pool was wearing a bathing suit! Having been to several spa towns in Germany and also to the large sauna facility at my gym in Poland almost every week, I had no reason to imagine that they wore bathing suits at spas in France! I did not have a bathing suit with me and had already paid 30 Euros entrance fee.  What do I do now???  Shall I venture into the water without it?

There was a little store at the facility, and my only option was to buy a pair of swimming shorts at the store. The cheapest one was 32 Euros. Having drained so much money at a ski resort in Switzerland only a few days before, I no longer cared about my wallet.  So I bought my first European-style tight-fit swimming shorts, splashing 32 Euros, donned it and walked into the "lukewarm" water, wondering how anybody could possibly relax in a bath wearing bathing suit...(Besides, most people who come to these spa towns splash 10 times as much as I did to stay and be pampered at nice hotels.)

Now what does all this have to do with the potential WHS? Well, I would say that although this TWHS covers 11 spa towns in 7 countries, beneath the cover lie different cultures, and be aware of each country's peculiarity as to the bathing habits.

Before I arrived in Vichy, I read about its famous and healthy candy called "Pastille de Vichy," made with the spa water.  As soon as I arrived there, I purchased them in a rather large container, and they kept my mouth sweet all day.  During my 2-week trip through France, I kept seeing this candy in every city I visited.