Great Spas of Europe (Czechia) is part of the Tentative list of Czechia in order to qualify for inclusion in the World Heritage List.

The Czech component with the Great Spas of Europe proposal comprises 3 (formerly 4) spa towns. They are Karlovy Vary, Mariánské Lázně and Františkovy Lázně. Karlovy Vary, founded in the Middle Ages, is the largest spa complex in Europe. 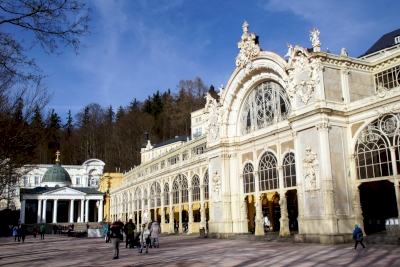 The story of this transnational nomination began in 2008 when "The Spa of Luhačovice" was deferred by the WHC. The ABE evaluation was clear: no OUV for Luhačovice alone, but ICOMOS recommended a thematic study on European spa towns. Initially, a total of 16 spa towns from seven countries were included in the tentative list. In 2016, the number was reduced to eleven. Interestingly, Luhačovice did not make it to the final nomination.The nomination website Great Spas of Europe provides photos and brief summaries of each spa, and links to their official websites. The nomination focuses on the development of European spa tradition between the 18th and early 20th centuries with its heyday in the 19th century. It only consists of spa towns with hot and mineral springs, seaside resorts are not included.

I visited the three sites of the Bohemian Spa Triangle on Easter weekend 2018.

Karlovy Vary is the largest and most famous of the three towns, and it was also the liveliest. Although the peak season had not started in April, the city centre was quite full with tourists and locals. The historic spa centre is located in the narrow valley of the river Teplá. I started my walk at the Grandhotel Pupp in the south and ended it after 2.5 kilometres in the north, where the narrow valley opens and the Teplá flows into the Ohře. All main spa facilities - spa hotels and mineral springs (Pramen in Czech) - are located along this route on both banks of the Teplá. The buildings around the springs are called colonnades, even those without columns. I liked best the carved wooden Market Colonnade and the Mill Colonnade in Neo-Renaissance style, the largest colonnade with more than hundred columns.
The most impressive spring is simply called Hot Spring (Vřídlo in Czech), a geyser that sprays up to twelve meters high. Unfortunately, the building is less beautiful, quite ugly to be honest. It dates from the 1970s and was built from reinforced concrete and glass.
Even if you're not there for healing or wellness, you can feel a bit like a spa guest by tasting the water of the hot springs. It's free for all visitors, but be aware that some are really hot, up to 72°C. It’s best to buy a porcelain spa mug, otherwise you'll have to use plastic cups. However, I have to admit that it is difficult to find a reasonably nice mug, most of them have an old-fashioned and kitschy design.
I really enjoyed my walk through the historic spa centre of Karlovy Vary. You have to overlook a few modern additions, but in general the historic centre is well preserved and well restored with nice Art Nouveau and Historicist buildings.
I finished my ‘drinking cure’ in the Becherovka visitor center. Becherovka is a herbal liqueur that is sometimes referred to as "13th pramen" (in addition to the twelve regular ones). You can try the original Becherovka, but also tasty cocktails mixed with Becherovka.

Mariánské Lázně also had its heyday in the second half of the 19th century. The architectural style is similar to Karlovy Vary, but the layout of the town is different. The historic spa was built around a central park area in which the most important mineral springs are located. The most impressive building is the Main Colonnade, a cast iron structure with a length of more than 100 metres (photo). Mariánské Lázně is famous for its large number of mineral springs, 40 in the town itself and about one hundred in the region. It is therefore likely that parts of the surrounding countryside will also be included in the core zone.

Although the thermal springs were known for centuries, the spa town of Františkovy Lázně was only founded at the end of the 18th century. The historic centre is a planned ideal city in a strictly geometric order. The most important spa buildings are at the main square, the Náměsti Míru, and the mineral springs are located in the park around the historic centre. All spa hotels, the pavillons and colonnades are painted uniformly in yellow and white. All buildings are well preserved and appear to have been recently restored (or freshly painted, at least). Františkovy Lázně is much smaller than its two more glamorous neighbors. It seemed pretty sleepy when I visited, but that may be different in high season. At least until the First World War the spa had a high reputation among European nobility and high society.

The Bohemian spa triangle is close to the border with Germany, the distances between the three towns are only 50 kilometres or less. By car it is possible to visit the three sites in one day. I spent a little more time there, because I arrived in Mariánské Lázně in the late afternoon and visited the two other two towns the next day.

So far I have visited nine of the eleven nominated spas, only Montecatini and Vichy are missing. The three Bohemian spas are among the stronger sites of this transnational TWHS, and Karlsbad was my favourite. Among the eleven sites are also weaker ones and a further reduction can be justified. I would also withdraw Bad Ems and Baden in Austria. One can even argue that the three Bohemian spas (together with the already inscribed Bath/UK) are sufficient to represent the European spa tradition. In general, I'm also in favour of including one outstanding example rather than a long list of sublocations, but there are some exceptions. And for the Great Spas of Europe, I think a serial transnational WHS is appropriate to represent the diversity of this category.
We have to wait and see if the WHC agrees with the selection of sites. Often, these transnational nominations with multiple locations are referred or deferred on the first try. However, I am sure that in the end the Great Spas of Europe will be inscribed. 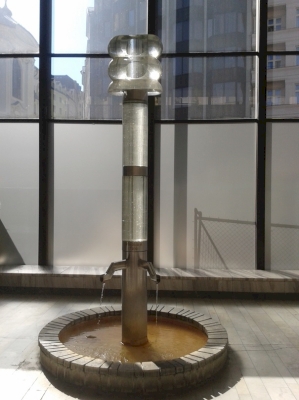 The Czech part of this nomination is sometimes called as the West Bohemian Spa Triangel. It consists of Karlovy Vary, Marianske Lazne and Frantiskovy Lazne. This part of Czechia was inhabited by German minority before WWII, thus, the spas are also known by their German names: Karlsbad, Marienbad and Franzensbad. Nowadays, Karlovy Vary is however very popular for Russian minority.

The Triangel as well as spa Luhacovice in the eastern part of Czechia (Moravia) have been included to T-list as separate sites for quite a long time. Luhacovice was deferred in 2008 and eventually "sacrificed" on the altar of trans-European nomination called Great Spas of Europe. The West Bohemian Spas emanate an international ethos for centuries. They certainly have the OUV, and they should have been already incribed. They are generaly appreciated as the symbol of spa culture by everyone in Czechia as well as abroad. Thus, I do not understand why the Czech nomination needs the help of western friends to be incribed... It reminds me one comment from the forum that by application of this approach the entire Europe minus Dresden will be inscribed soon as the trans-natinal cultural landscape of a global importance...

Luhacovice spa is also special but it is built in national style and it has mostly national connotations such as the influence of composer Leos Janacek.

(1) Karlovy Vary spa is the largest and the most famous from the Czech component, it is located in a deep, green valey of river Tepla (it means warm river in Czech). It was founded in midle ages and among several historical structures there, barroque church of St Mary Magdalene should be mentioned. However, it mostly consists of hotels and buildings for balneology purposes from 19th and 20th century including brutalist landmark - hotel Thermal (built 1967-1976). The most spectacular hot spring is Vřídlo geyser inside modern colonnade from 1975. It was under reconstruction during my last visit in 2019, and geyser "does not work" now. However, three hot springs inside the building are still acccessible  - PHOTO. (2) Marianske Lazne spa is not such compact and intact structure as Karlovy Vary, but you can find very fine cast-iron colonade there. (3) Frantiskovy Lazne is the smallest but the most intact component recognized by yellow facade of 18th-19th century buildings.

The Spas are nominated for 2020, and I expect smooth inscription!

If you are in the area, there are quite a lot other places of interest: (i) Slavkovsky Les protected landscape area covers forested montaneous plateau with unique serpentinite rocks, numerous natural mineral springs, beautiful lakes such as Kladska, and areas with unique flora around vilage Prameny (2) Lazne Kynzvart small spa town with several springs and the chateau with fine collections, (3) the castle in Becov nad Teplou with wonderful Reliquary of St. Maurus from 13th century, (4) Soos natural reserve - incredible swamp area, etc...