Archaeological Site of Arslantepe is part of the Tentative list of Turkey in order to qualify for inclusion in the World Heritage List.

The Archaeological Site of Arslantepe comprises a palace from the 4th millennium BC. It dates from the Uruk Period and shows the interaction between Eastern Anatolia and Mesopotamia. The “palace” is a large mud-brick complex of several buildings. The walls still have their white plaster, and red and black wall paintings.

Map of Archaeological Site of Arslantepe 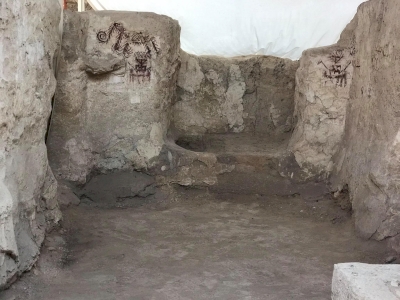 Turkey has already the oldest proto-urban settlement (Neolithic Site of Çatalhöyük) and the oldest temple/sacred site (Göbekli Tepe) inscribed on World Heritage List, and probably soon the oldest palace or rather administrative and residential complex will find its place on the List – Archaeological Site of Arslantepe. By writing ‘oldest’ I mean the oldest and most remarkable found until now.

I’ve never heard about Arlsantepe before it was nominated for 2020; but reading the short description on Unesco site, I realized that this one is widely known as Melid, a late or neo-Hittite settlement located in Central Anatolia, far from any other Turkish heritage sites already inscribed. When you look at the map, it seems not so distant from Nemrut Dağı… But it only seems… And without a car, it takes hours and hours and multiple connections to get from one to the other. The closed place to visit for WH chasers is Harput, in Elaziğ, on TL from 2018.

So why do we have two different names for the same site? Melid or Malidiya in Hittite language was the name of the Neo-Hittite city established after the collapse of Hattuşa (13th/12th century B.C.). After the invasion of the Sea People, they (Hittites) moved south and south-east and occupied the territories already developed by previous inhabitants (Ishuwa for Hittites), like Carchemish, Zinchirli or today’s Malatya region. And this later place they called Malidiya. Let’s get back to 20th century: during the excavations works the most monumental pieces that were rediscovered here were: the statue of king Tarhunza (8th century B.C. – we can see a strong Assyrian influence in presentation of beard and hair of the king) and two status of limestone lions (probably 10th century B.C.) that used to stand at the gate of the city; the lions looked (and still do) so impressive that the site was named Arslantepe in Turkish – from ‘arslan’ or ‘aslan’ as its variant, meaning ‘lion’, commemorating these two ones that you can see (together with the statue of Tarhunza and many reliefs) in Museum of Anatolian Civilizations in Ankara. (If you can visit only one museum in Turkey, this is the one you should go!). Replicas are on the site, just outside the entrance gate. And while in Malatya, do not ask for the way to Melid! No one will know what you’re talking about (well, in Malatya museum they know, but this is a museum). Just say Arslantepe – these lions are the symbol of the city! Although the lions of Arslantepe are much younger than the reason the site will/would get world heritage status…

Quoting the description from whc site: “birth of hierarchical societies, that of the first centralized political and economic systems, the origin of bureaucracy and its first working system, the rise of a systematic control on human labour, in other words, the origin of power and the State. The site also testifies to the fact that these crucial changes in human history took place for the first time over a large area including, besides Mesopotamia, the Euphrates region in Eastern Anatolia.”

What you can expect to see? A tell, not so big. The entrance is free. And, according to the note at the entrance gate, you must be accompanied by a guide or guard to visit the site. And that not all parts of excavations are open to public. When I was there, no guides were at the site. The guard was sitting in a small kiosk from where I could take a leaflet – in Turkish. I’ve read the information on the board and followed the ‘tourist path’ which covers only part of the of the oldest discovered VIa level: the long corridor from where you can spot some water facilities, internal chambers of the palace with some wall paintings (on the picture), some faded reliefs, part of internal courtyard, remains of rooms around it. And then you go up (till now everything was covered by a corrugated sheet) and back to the entrance. Thanks God there are some information boards in English – I had a better understanding of what I’m looking for…

Most of other levels of the site were covered back with sand, and officially it is not possible to climb the mound. Using my basic Turkish I asked the guard if it would be possible to penetrate the parts closed to the public. As I was the only person visiting and he was surprised and seemed to be happy that a foreign tourist tried to speak Turkish, he closed the entrance gate and guided me through the whole site! For him the most important part was the place where the oldest swards were excavated. (Some of them are displayed in the Malatya museum, and three of them in the new Treasure Museum at Istanbul airport.)

Arslantepe is located around 7 km from the city centre. I was coming by bus from Elaziğ and asked the driver to stop at the crossroads with Sivas Caddesi from where there is one city bus going to the site. To use public transportation within the city you must have a bus card that can be bought only at the main bus stops/local bus stations. I did not have one, but the driver let me in without it – it is not possible to pay to the driver. To get back to the city (I wanted to visit the museum too), the guard from Arslantepe hitchhiked for me.