Mahmut Bey Mosque is part of the Tentative list of Türkiye in order to qualify for inclusion in the World Heritage List.

The Mahmut Bey Mosque is a wood columned and wood roofed mosque in Kasaba. The interior woodwork is richly decorated and painted. The exterior is made out of stone. The mosque shows Central Asian influences. 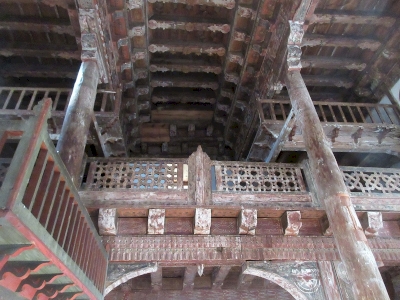 We visited this mosque on the way from Safranbolu to Kizilirmak delta (a 2019 nomination that was withdrawn by Turkey after negative ICOMOS evaluation). It needed a short detour to the rural area of Kasaba where the mosque is located. It was around 6pm and the mosque was already closed but the guardian spotted us on the way and returned to open it just for us. It was very fortunate as from the outside the mosque is nothing special, but very beautiful inside.

The mosque was built in XIVth century. No cement was used (except for mihrab) and the roof was built without any metal. So the inside is entirely wooden, with beautiful paintings. I am not aware how many original elements survived but overall it looked very old. Turkey has not publicly revealed any plans to inscribe the mosque but… UNESCO plaque is already there! Not WHS plaque and they admit it is on tentative list only, but still I find it misleading.