Tak'alik Ab'aj National Park is part of the Tentative list of Guatemala in order to qualify for inclusion in the World Heritage List.

Tak'alik Ab'aj is an archaeological site that shows both Olmec and Mayan influences. It flourished from the 9th century BC through to at least the 10th century AD as an important centre of commerce. The site comprises four groups of in total some 240 monuments, including ball courts, hydraulic systems, petroglyphs, a royal tomb, Maya hieroglyphic inscriptions and what is possibly an Olmec colossal head. 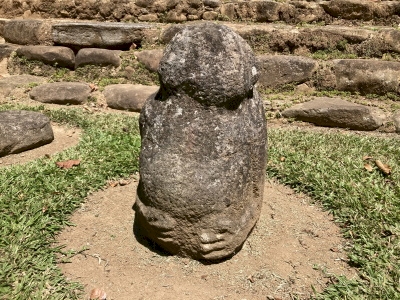 Guatemala’s 2022 WH nomination, Tak'alik Ab'aj, is a site that does not feature on the traditional Guatemala itineraries. It lies in the far southwest of the country, not really close to anything else of interest though the highlands and its indigenous villages are pretty in a Nepali/Bolivian way. I visited by public transport on a day trip from Quetzaltenango, which took 3 stages:

Upon nomination, Tak'alik Ab'aj may carry the epic subtitle “Mayan-Olmec Encounter”. More accurate however is that the place was an important trade town for a long period, from 800 BC to 900 AD. During that time, it has been influenced not only by the Maya and the Olmec, but also by Teotihuacan and regional Pacific potbelly sculptors. It was probably inhabited by changing ethnic groups.

The site lies in a subtropical moist forest, so prepare by applying a cocktail of sunscreen and mosquito repellent. The entrance fee for foreigners is 50Q. There were a few cars in the parking lot when I arrived on a Saturday morning, but I encountered no one except for a romancing couple.

To prepare the site for a larger and more international stream of visitors, interpretation could be improved. There are yellow and green arrows that indicate two different trails, but there is no indication of the difference. I took the green one, which may be the longer one. Fortunately, I took a photo of the site overview at the entrance, so I had a rough idea of what I should see along the way during a “complete” visit. The numbers did not correspond with those on-site though but expect several plazas with ruins, stelae, and altars. Wikipedia has a very extensive description of all objects, maybe download or print that. There are information panels (Spanish only) along the way, but they seem to be placed at random.

It’s not an easy site to come to terms with. It reminded me the most of two other Pacific lowland sites that I visited not too long ago: the TWHS of Chalchuapa in El Salvador and the Stone Spheres of the Diquis in Costa Rica. Tak'alik Ab'aj is richer in its remains than these two, but still a far cry from the artistic qualities of Copán for example. The stelae here are mostly unintelligible (though it has among the earliest Maya hieroglyphic inscriptions), the statues a bit odd. What could have been Olmec heads are resculptured into potbelly statues for example. The site has yielded many interesting findings for archeologists to place it in a bigger picture and adjust Maya and Olmec histories, but these are not obvious to the untrained eye.

En route you’ll find also a sad animal reserve, I think the ICOMOS advisors would want to see it closed. I did encounter a wild pig though, or maybe it had escaped. The site is especially good for birds, it even features in birding tours of the region. 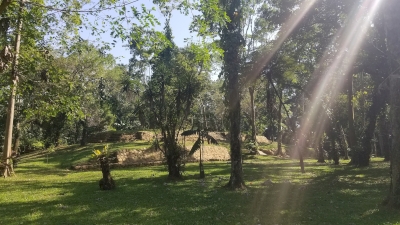 Guatemala hasn't inscribed any WHS since 1981, and their tentative list hardly gets updated. Almost all 2002 documentation is rubbish yet one of these, The Mayan-Olmecan Encounter (hereafter the M-O-E), had been resubmitted as Tak'alik Ab'aj National Park with an excellent description. I inquired if Tak’alik Ab’aj is the only site for the M-O-E and while technically not true it is the only touristy place, accessible place, "good" place to see the mix-up of the cultures.

First off, this is a bit far from the usual places in Guatemala. Me and my BFF took a road trip to the Fuentes Georginas hot springs (come very early if you want to go there it fills up fast!) and continued south to the park and ended up at the coast from where you can easily get back to Antigua - something I would recommend as itinerary. The road is pretty good, all paved and just the usual annoying road bump madness.

Second, do NOT expect Tikal, Calakmul, Chichen Itza or anything that grand. Most places here are in ruins. There is one set of grassy stairs that lead to what must have been a grande pyramid but it is just a grassy hill now. All other "highlights" are basically dig holes for carvings - and not very interesting ones for tourists to look at. Work seems to be ongoing. What you do see is unique, that's for sure, because the M-O-E is two cultures merging their architecture and starting out with mainly Olmec culture and showing more interest in the Mayan one later. Olmec is also super underrepresented on the WH list so it is due for something.

There are several paths you can follow as otherwise this place is complicated to figure out where what is. It also takes you past some kind of mini zoo of poor animals in cages - so that was maybe a little surprising. You can also choose to hire a guide but we never do that.

Basically a shoo-in if it ever gets nominated but that could take decades.