Île de Djerba is part of the Tentative list of Tunisia in order to qualify for inclusion in the World Heritage List.

The island of Djerba has a rich past and archeological evidence from different civilizations. Notable remains include the Numidian mausoleum of Henchir Bourgou, the archaeological site of Meninx, the synagogue of Ghriba, the Turkish fortress of Ghazi Mustapha, and many mosques. 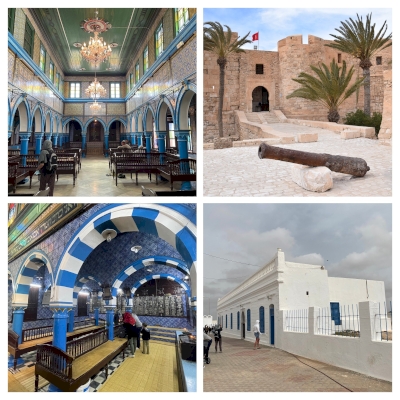 On our Tunisia journey this April, we visited the island of Djerba. Visiting all the country’s WHS’ we wanted to add on a visit the only site which will supposedly be forwarded (next year). Not knowing too much about the island upfront thus we decided to stay a day (and two nights) to explore it. Even though the island is far from small the mentioned elements in the dossier are limited, so with all due respect to the island’s nature, history, culture and trade traditions, there is not much to see!

The nature - is semi-desert like impression all over, except for then inhabited areas. Sandy and rocky, some scattered palms and some slightly cultivated fields. The description says it’s a “dispersed habitat illustrating a great capacity of adaptation”, but we failed to see the beauty or the uniqueness.

The history - is more interesting, but the tangible part is limited.

The culture - is albeit more visual. There are heritage museums showing off the lifestyle and clothing and their way of managing daily life.

The trade traditions - is also partly “documented” through the heritage museums and some of the buildings.

The collection of scattered elements is meant to represent the heritage and we spent our time visiting a collection of them. We used a handy app called “Djerba Guide“.

The most interesting element was the venerable synagogue of Ghriba from the 19th century. The exterior is decent, not flashy. The interior though, is more interesting (3 pictures). Even though we haven’t been visiting many synagogues it looks interesting, and it is historic. According to legend it’s the oldest in Tunisia and the founding claims that either a stone or a door from Solomon's Temple or the Second Temple is incorporated in the building.

Borj El Ghazi Mustapha (one picture) is an ancient castle in Houmt Souk and built on the site of an old ribat from the early days of Islam. It is the largest and best-preserved local castle and is from the 14th century. A nice site to visit, but it doesn’t appear unique.

The Numidian mausoleum of Henchir Bourgou is nothing more than a small piece of a ruin, not even recognisable as a piece of a wall. It could have been anything! It’s probably old, but it’s hard to see the origin.
As it is also a sub-site of the TWHS “The royal Numidian mausoleums” we were disappointed. This can’t possibly be the main element of that TWHS!

The archaeological site of “the opulent ancient city of Meninx” is a serious of stones lined up in the semi-desert like surroundings. You can see there is patterns on the stones, but there is impossible to see where they “belong”.

There are many mosques, even one underground (which can be visited). Those mosques are not anything like other mosques we have visited before, they are more modest end simple. A good thing, but hardly universal value.

Both in Houmt Souk and Guellalla (the ceramics city) there are heritage museums. The first one small, but the second one is bigger and more interesting, although just modest.

Our final attempt was to look closer at the town Houmt Souk. The “fondouks”, the trading posts or buildings, looks nice although they now are converted to hotels, restaurants or cafes. You can imagine their origin.

The OUV on Djerba is hard to understand. The only maybe is the old synagogue of Ghriba.

Since we are “a driving couple” we took our rental down south from Tunis, through five WHS’, and the TWHS’ of Sfax and Oasis of Gabes. From Sfax it’s a 3 ½ to 4-hour ride and from Gabes it’s slightly more than two hours.
We approached the island through the ferry from Jorf entering the west side of Djerba, a ferry ride of 20 min. We had practically no wating time, but we heard later that we were lucky.
We left the island through “The roman road”, the artificial mainland connection at the south end.

We stayed a night in a lovely 5 room Dar called Dar Bibine (www.darbibine.com) in the town of Erriadh run by an expat couple from Belgium. The town has numerous building walls with street art which was interesting although the art is modern. 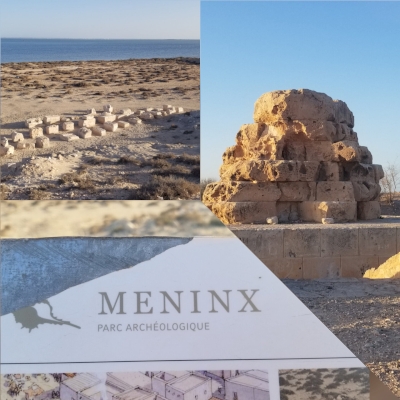 Absolutely horrible. Djerba is great for beach resorts but trying to include the crappy traces of archeology around is just pathetic. I would give it half a star. That "thing" in the top right corner is actually a site! The Meninx remains may be sort of interesting but you only see these symmetrically placed rocks... Seriously?! If you are on Djerba with a car then by all means have a look around but doing a tour, as I saw another couple do, is just a waste of money. You are better off visiting the Mos Eisley Cantina than mosques and towers.

I visited Djerba for holidays in February of 2009. I was very surprised now when I saw that it was to be nominated as a WHS since I found the island neither very beautiful (it is totally flat) nor archeologically or architecturally interesting. I didn't even feel the need to take any pictures! We made a tour of the island and the most memorable place was the synagogue but even this didn't impress me much. More impressive was an excursion into the desert but naturally this was on the mainland. All in all it seemed very touristy and with few historic monuments. I doubt this has changed much since.