Flow Country is part of the Tentative list of United Kingdom in order to qualify for inclusion in the World Heritage List.

The Flow Country in northern Scotland is considered the largest area of blanket bog in the world, representing 1.5% of the global total. Covering 4,000km2 the bog landscape and surrounding heathland remains largely undisturbed and its wide range of vegetation provides habitat to a large range of birds, including an abundance of raptors, waterfowl and waders. The site would be unique if inscribed for being the only site listed because of its bog/ peatland. 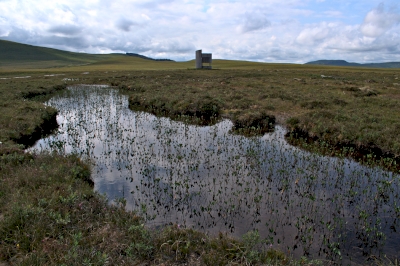 I visited the Flow Country by train in July of 2021, taking the 07:00 ScotRail service from Inverness to Wick. It took 3.5 hours to cover the distance to Forsinard, which is only 100 kilometres or so as the crow flies but the railway twists and turns mostly following the coast with a few long detours inland. There are some great views of the sea on one side and hills on the other along with a brief glimpse of Dunrobin Castle through the trees and barrels upon barrels of whisky stacked high at Glen Morangie to tick off some Scottish stereotypes. A day return ticket from Inverness to Forsinard cost £24.60, which is surprisingly cheap for a train journey of this distance in the UK but this is hardly a busy commuter service. Indeed, most of the Far North Line is single track and many of the stations are stops by request only. However, all trains stop at Forsinard as a rare section of double track here allows trains to pass each other. The step-down from the train to the platform here is the largest I have seen, more of a jump than a step.

What was once the station building is now a free-of-charge visitor centre but, the pandemic being as it is, I did not venture inside. Instead, just south of the station, a boardwalk led out across the peatlands. Following the boards offered a sighting of a couple of lizards basking in the sun along with various wildflowers and some carnivorous sundew plants. I had unintentionally timed my visit to coincide with the end of a long heatwave in the UK and much of the supposed ‘wetland’ had been baked dry with pools of water turned to dried out mud. This was great news in some ways as there were none of the biting midges that Scottish summers are famous for but it did detract somewhat from appreciating the boggy nature of the site that was supposed to be part of its OUV. That being said, I stepped off the path briefly as a test and the ground was still surprisingly soft and squishy despite how dry it looked. There was also still water present in the larger pools, over which hovered some impressively large dragonflies. The highlight of this particular short walk was the lookout tower, climbing up inside of which gave a commanding view over the surrounding mostly flat peatlands dominated by the twin peaks of Ben Griam Mor and Ben Griam Beg to the west.

I walked back from the tower to the road along an older path of stone flagstones rather than the modern boardwalk. This loop to the tower and back took an hour pausing to read the handful of information boards along the way, which meant there were still over 2 hours until the next southbound train so I had ample time to repeat the same loop at an even more leisurely pace. In all this time I sadly did not catch sight or sound of any of the significant birds that live in this habitat but did spot a herd of red deer in the distance near the train tracks. The Flow Country is protected as part of the Caithness and Sutherland Peatlands Ramsar site, which overlaps with an EU Special Area of Conservation (SAC) and Special Protection Area (SPA) and much of the same landscape is also covered as UK Site of Special Scientific Interests (SSSI) and a National Nature Reserve (NNR), i.e. it’s already on a lot of other lists already before the big one. The SPA designation specifies a number of bird species that live here as being worth protection, namely black-throated diver, common scoter, dunlin, golden eagle, golden plover, greenshank, hen harrier, merlin, red-throated diver, short-eared owl, wigeon, and wood sandpiper – perhaps all these birds were being sensible unlike me and resting in the shade from the midday sun.

Eventually, I returned to the station and climbed aboard the 13:47 service back south to Inverness. My perception of the site is worsened somewhat by being forced to spend over three hours here by the lack of trains – only four per day, which goes down to just one per day on Sundays. If possible, I would very much recommend driving here rather than taking the train as an hour at Forsinard seems plenty and leaves time to explore other parts of the Flow Country that are not accessible by public transport. This would make a worthy diversion from the popular NC500 road trip route around the north coast of Scotland and there appears to be plenty of parking at the visitor centre despite its remoteness. As for its chances for inscription, the government appears to be going ahead with various consultations and all indications are they have a positive outlook. What the boundaries of the site will be are as yet undetermined and I am a little concerned that the Forsinard Flows is outside of the area covered by the Ramsar and SAC/SPA designations so I could have gone all that way just to visit a future buffer zone! That being said, the boardwalk and tower are inside the NNR and I struggle to imagine the flagship tourist site of the whole landscape being left out of any future WHS. Whether it deserves to be inscribed is difficult to say. It does seem to be a unique habitat within the UK at the very least but the generally featureless blanket bogs do not offer Scotland’s most spectacular views despite their biological importance. In its favour, the carbon dioxide storage potential of peat may a promising selling point to an increasingly climate-conscious world. Therefore, I lean towards inscription despite my mixed personal experience and would be happy to visit again to try and see all the bird life I missed this time, just not on the train. 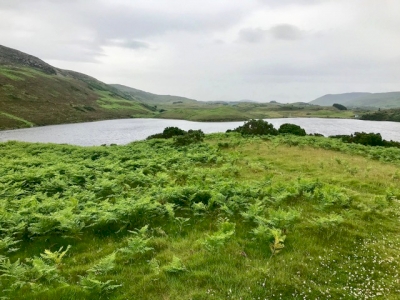 On our trip around the northern coast of Scotland in summer 2019 we crossed also the area of Flow Country. The main argument about this site seems the size of untouched land that is unique in Europe and the amount of CO2 it binds. To me this seems for my taste to jump on the (very necessary) wave of the current climate consciousness.
The trip along the northern coast road is attractive mainly for the rocks and beaches on the seaside. The actual flow country on the landside has a certain wild “Wuthering heights” charm: it is a huge area of rather flat moor with moss in many shades, pools and small hills. This is a very typical Scottish landscape but you can find it in smaller chunks nearly everywhere in Scotland and it is also almost everywhere else more attractive because it contrasts sharply with hills, mountains and lakes.
There is little doubt that this area has an ecological importance and that it should be protected but for a traveller this has not more to offer then a walk (where it is possible) through a very wide, lonely and very wet country. That is less then almost any other landscape of this spectacularly beautiful country can offer.

Things to see:
The most interesting thing during this drive is really the contrast between the landside and the seaside with gorgeous bays, cliffs and beaches. Here are a few places interesting sights in the area. They are not relevant to the OUV of this natural site but worth a stop.
In Alltnacaillich you can see one of the best-conserved Brochs in Scotland, the Broch Dun Dornaigil.
Near Internaver you can find the beautiful Lochan Duinte. On its northern shore you can explore one of the best clearance villages. It is quite overgrown but there is a map and you can find some of the ruins by the relief in the soil. The attached picture is taken there.
At Bettyhill there is the quirky Strathnaver Museum in an old church with an interesting graveyard.
At Crosskirk there is a very nice viewpoint with cliffs near St Mary’s Chapel. 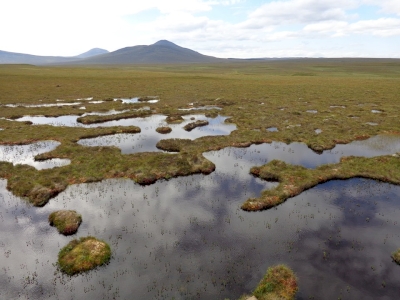 Flow country is the name given to a large area of bog in the very northern part of mainland Scotland. We visited that region during our “tour of Scotland” in summer 2015. We drove to Forsinard, where a small visitors center is housed in the train station, surrounded by few houses. I understood that the train line and station were still in operation at that time (unexpected for such a tiny and remote village), so this could be a travel alternative to car for those willing to visit that place.

The visitors center is operated by RSPB (Royal Society for Protection of Birds) and gives helpful information about fauna and flora of the area. Main attraction is the nearby board walkway, leading to the recently built observation tower. The area is wide, quite flat with few “bens” (Scottish mountains) in the background, and extremely quiet and relax (and clearly off beaten tracks). We really enjoyed the landscape, as not comparable to any other in Europe (I remember some bogs in French Massif Central, but there is no way they can compete in terms of extend and landscape), as well as observation of insects, lizards and droseras around the small pools. All activities were free of charge. I would be happy to see this area inscribed one day, and I recommend this place to anyone visiting this area (and by the way, the road to Durness, that we drove on the next day, goes along what is probably one of the most scenic coasts of all the UK).

I remember also seeing several signs along the road, not really in favor of the protection of nature in that region. Back home, I found out on Internet that in the 1980s the area had been subject to changes to boost activity, such as planting trees and drainage of the land to develop farming, until it was stopped in the 1990s under consideration of the uniqueness of this natural heritage (with RSPB leading the fight for protection). Antagonism between development of human activities and heritage preservation is not something new, but I believe that full support of people living in the area is a must before inscription of any site as a WHS. It may still take some time before this candidate site would move forward.