Moler landscapes of the Liim Fiord

Moler landscapes of the Liim Fiord is part of the Tentative list of Denmark in order to qualify for inclusion in the World Heritage List.

The Moler landscapes of the Liim Fiord hold - on the two islands of Mors and Fur - the largest and most impressive deposits of "mo-clay" (Moler). Mo-clay is a very rare sediment composed of diatoms, a type of algae, from the Lower Eocene (56-54 million years ago) bordering onto the Palaeocene Era. The mo-clay contains about 200 distinct layers of volcanic ash correlating to the volcanic provinces of what are now Greenland, the Faeroe Islands and Great Britain, and to the opening of the Atlantic Ocean, which brought about the creation of the map of the world as we know it today. The 60-meter deep deposits of mo-clay contain exceptionally large quantities of fossils of a diversity that provides a perfect record of both aquatic and terrestrial life from a period about 10 million years after the massive extinction event that brought about the demise of the dinosaurs.

Map of Moler landscapes of the Liim Fiord 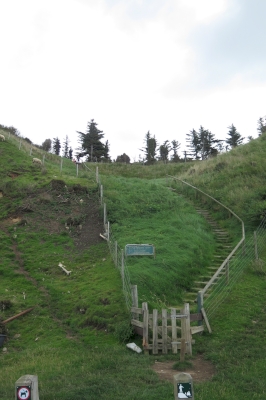 I generally don't like fossil sites. I think they are boring and I'd rather read a book about it or look at a website which probably gives me better explanations than the site would. Moler (=Moclay) is clay and a layer of ash that preserved fossils up to 60m deep. Most of these fossils are nothing special, e.g. plants and crustaceans that can be found in many places around the world. What it boasts are good examples of turtles and birds so if you are into that you may want to visit the Molar museum like I did.

The museum is at the northern tip of the island Mors, which maybe not seem like an island from a map view but on closer look you will notice it is only connected via bridges. I crossed the Limfjord (aka Liim Fiord?) from the north via a super short ferry ride. I met a couple biking around the entire area which apparently is a common thing to do in Denmark. After all, most of it is super flat. They had a guidebook for the area and it had a lot of info on Moler. It also showed a grave site just after the ferry crossing marked as "Kong Fegges grav", a grave of a former king. The grave isn't really important but this was the steepest cliff, called Feggeklit, I ever climbed in Denmark! (in other words it takes 2 minutes to get up to the top). The view from there is great. But okay, I use that picture because it shows the landscape rather than boring fossil pics from a museum.

This area of Denmark is very nice whatever the purpose of your visit, but seeing that it's so easy to add a fossil visit to your itinerary then you might as well check it out. I personally don't like it for the fossils so I don't think it's a WHS.