The Porticoes of Bologna consists of 38km of porticoes lining its streets, dating back to the 11th century. The prominence and preservation of porticoes in Bologna was cemented by a 13th century law, still in place, defining porticoes as compulsory for all the streets where they were considered useful on private soil, also be preserving their public uses. Some porticoes have special religious and social significance, for example the 3.5km long, 17th century portico along the pilgrimage route to the Holy Shrine of St Luke's Madonna.

My name is Maurice,  I'am switzerland from Zurich but my parents are Italian from Bergamo area.

So a couple of years ago we decided to visit some different towns of Italy,  the one who knocked me among all was surely Bologna.

And I don't want to mean the wide middle-aged City center with the Two Towers or the oldest and well - known all around the world University but especially the huge, amazing and fascinating net of Porticoes who embraces all the utban agglomerate.

But to catch the feeling, the real feeling, you have to walk under them in a rainy or very hot day and it will like to be confortly sit in your sitting-room but not alone and able to live and perfectly understand the real behaviour of people who lives here!

In fact like the modern videogames  Porticoes are INTERACTIVE but they are all TRUES...Here people get the joy to live and to do something together and Porticoes, are the glue that make it possible...

They are also very different each others:  If you ralenty your path and look around the arches you can discover lots of little thing you can't imagine to find here: hidden Madonna altars for an old wow received,  old graffity with Insignia and prices of ancient whorehouses and also a window that, If you open it,  you can discover a Water Channel that passes between houses as a little Venice!

It's difficult to choose the Greatest Portico, the Best or the Oldest but surely you can't neglect the Portico of S. Luca, the Longest at the World (just about 4 km.!), that join downtown with the Basilica on the Colle dela Guardia from where you can tast a wonderful landscape of the Towered Bologna.

They are in all 666 arches and this number could sound strangely linked to a Holy Basilica... but this is only one of the hidden Mystery of the City that Porticoes keep inside them...

To finish,  in my opinion, YES the Porticoes of Bologna really DESERVES the World Heritage List 2021!

The topic of this tentative site is not University of Bologna, the oldest operating university in Europe, or Historic Centre of Bologna, one of the largest historic centres in Italy. The title is The Porticoes of Bologna. The nomination picks out one architectural element and focuses exclusively on it. The historic city centre is only the buffer zone of the nominated property, and the core zone does not even consist of whole buildings. Actually only the porticos are included. Really a strange nomination.
Porticos are everywhere in Bologna. In the city centre, they stretch over a length of almost 40 kilometres, more if you include the outskirts. However, not the entire network is nominated. Twelve locations were selected to represent 900 years of architectural evolution, from the 12th to the 20th century. About half of them are located in the city centre, so that every visitor to Bologna can safely tick this site as properly visited if it will be inscribed.

Links to the Executive Summaries of the cultural nominations for 2021 have been provided here in the forum. I have visited Bologna several times in the last decades, two visits were after 2006 when the porticoes became the topic of the TWHS. Based on my memories and confirmed by my photos, I can conclude that I have visited at least eight of the twelve locations.

The Portico del Pavaglione (photo left) is located right in the heart of the old town, on the east side of Piazza Maggiore, along the Basilica di San Petrone to Piazza Galvani. Essentially it is the porticos of the Palazzo Banchi and the Palazzo dell'Archiginnasio. The latter was once the main building of the university, today it houses the municipal library. Most tourists come to see the historical Anatomical Theatre.
Just around the corner is Piazza Cavour e Via Farini. The layout of the square dates back to the 19th century, when the area became a banking district. Today you can find the high-fashion brands here that perfectly match the elegant porticos with colourfully decorated ceilings (middle photo).
The triangular Piazza Santo Stefano is one of the most beautiful spots in Bologna, wonderful for an espresso in the morning or a glass of wine in the evening. You are surrounded by façades and porticos from the Renaissance.
One of the longest stretches among the twelve parts is Strada Maggiore, which begins at Porta Maggiore and ends at the two leaning towers Asinelli and Garisenda, the city's landmarks. Most notable here are the porticos of the Basilica of Santa Maria dei Servi and its churchyard, as well as the Casa Isolani from the 13th century with a high wooden portico on which the third floor rests.

Two other components are in the northern part of the medieval city. Via Galliera was once the main access road to the city centre from the north and is flanked by noble palazzi and porticos. And Via Zamboni in the university district: the nominated section consists mainly of the porticos of the Palazzo Poggi complex, the headquarters of the university. The University Museum is also located in Palazzo Poggi and is highly recommended for everyone who is interested in the history of science.

I also walked along the Portico di San Luca (photo right) up to the Sanctuary of the Blessed Virgin. It has a length of almost 4 kilometres and is considered the longest covered walkway in the world. However, you can skip the first part and take a bus directly to the Arco de Meloncello, where the nominated section begins. When it was built in the 17th and 18th centuries, the entire portico was outside the city walls, but later residential houses were added along Via Saragossa and today you walk along shops and bars. Maybe these changes are the reason why only the uphill stretch is included. It is quite steep in some parts and I’ve seen a lot more runners than real pilgrims.

By chance I also visited the Via Santa Caterina component. In 2013, I went to Osteria Santa Caterina for dinner, a recommendation from a colleague. It is an ordinary neighbourhood, workers and craftsmen used to live here. The porticos are low, narrow and undecorated, but often the old wooden beams are still visible. I was surprised to find this section on the list of nominated components.
The other four components are on the outskirts of Bologna, including the most recent part: a porticoed building in the Barca district as an example of urban expansion after WWII.

I like Bologna. It is a vibrant city with a good mix of locals, students, and visitors, not crowded with tourists like many other places in Italy. Bologna is rich in culture and history and not to forget the excellent cuisine. Tortellini and Mortadella come from here, and the original Ragù alla Bolognese, to name just a few local specialties.
I like Bologna, but I don't like this nomination. Porticos or arcades or colonnades (whatever the exact difference is) can be found all over the world. They are so common that we don't even have a connection for them on this website. There would be too many. Well, nowhere are there as many as in Bologna, neither in Italy nor elsewhere in the world. But is that enough for a WHS? Does it really make sense to evaluate the evolution of an architectural element separately from the historical and cultural significance of the associated buildings?
All in all, a thumbs down from me. But we will have to wait and see how the WHC deals with it. Perhaps Bologna will remain one of my top non-WHS destinations in Europe. 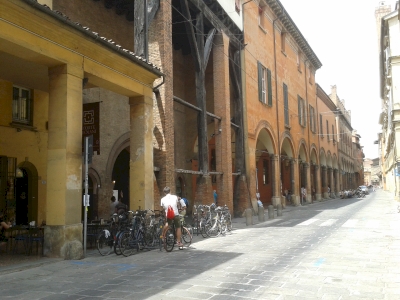 However, the feature nominated for inscription is not historical center of Bologna but its Porticoes. They are almost everywhere in the center. They are of diverse age, size, shape, color, material and style. The most interesting examples can be found around Torre degli Asinelli, around S Stefano, in Strada Maggiore (PHOTO) and also directly in the Piazza Maggiore and the Quadrilatero district, but I do not know what exactly is nominated as TWHS. However, the world longest porticoes, which is mentioned in the nomination indeed, is located outside the historical walls of Bologna: It starts just behind the Porta Saragozza and goes ca. 3.5 km towards Basilica Madonna di San Luca, which is located on the top of green hill that is nicely visible from train in direction to Modena. The portico is merged with houses, of course, in the part closer to town, but it is a free-standing structure once it goes uphill to the Basilica. I must say I was not such an enthusiast to follow it and reach the sanctuary. It was quite hot day in June. I wanted spend my time in the city center and not walking in this very long but austere structure. I would expect that it is pretty the same during all 3500 meters.

Updates: In June 2021, the site got rather negative evaluation and deferral by ICOMOS. The main objection was that the original proposal was a seemingly randomly chosen catalogue of porticoes and it was not clear how the nominated components have been selected. The next nomination should not be a catalogue but an organic structure expressing the OUV. I am very curious about the future with the proticoes...