Vjetrenica cave is part of the Tentative list of Bosnia Herzegovina in order to qualify for inclusion in the World Heritage List.

Vjetrenica is the largest cave in Bosnia and Herzegovina, with 7.6 km of passages. It is one of the most biodiverse in the world, with more than 200 animal species (37 endemic), including 92 troglobites. 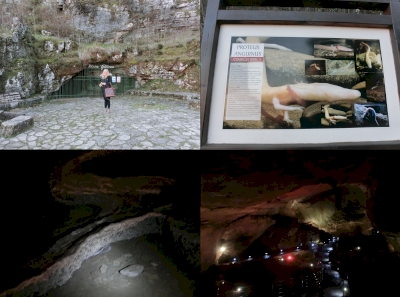 You may be thinking: "yet another cave?! Caves are boring!" Well, you are right! After visiting many caves for art, rock formations, it does become boring. However, this cave is famous for having a huge amount of troglobite (refereed to by the official document as "troglobionates" which I assume is incorrect), animals that live in the darkness. The caves feature prominently olms common in caves in this area of the world. These aquatic salamanders have adapted to live in the dark and feed on small crustaceans, insects and snails. You may now be thinking that you never see these when you visit and the water puddles at the front of the cave look so clean, that's because they only live well beyond what visitors get to access.

Vjetrenica cave is just wedged between the borders of Croatia and Srpska, with the latter only having a sign post that you enter the region. Looking at the map you might think a trip from Croatia is quick but I found out the hard way that the nearby border post is for local residents only (~2015) and the "road" leading south isn't for the faint of heart.

I emailed ahead to arrange a visit and met my lovely guide (pictured above, that's obviously not me) who confirmed the time and was waiting at the nearby restaurant/bar only a stone-throw away. We then drove up the 200m to the entrance even though it's perfectly walkable. The cave is really well done, with safety rails and lights etc. I visited in the off season so the guide was super excited to have something going on but I would imagine they get enough visitors in the summer or else the restaurant/guesthouse in such a small village would feel off. Inside there doesn't seem to be any signs of whatever the Balkan war destroyed in 1991.

Most of the cave seems like the generic visit of stalactites etc, I pretended to be amazed even though it's nothing special. Then she showed me the lonely olm in the ponds and I was a lot more interested. She shined her torch which the li'l guy surely didn't like but I supposed he's the "hippo in the zoo" for this tour. You can kind of make out the white string at the bottom left picture. She mentioned that this guy doesn't actually live in the areas at the front but was moved here as a showcase - not surprising and I'm not sure what to think about that. I don't generally visit a zoo due to the animals being kept in cages as pets and all, but if the guy can live in the front happily too then I suppose I don't mind. I also cannot speak about the conservation status and whether there are lots and lots of these creatures to be found further in anyway.

While I find Vjetrenica cave a worthy visit I think to be included it should look at other caves in the region for a serial troglobite nomination including the more famous Postojna Cave in Slovenia.