Phuphrabat Historical Park is part of the Tentative list of Thailand in order to qualify for inclusion in the World Heritage List.

Phuphrabat Historical Park is a wooded sandstone hill containing huge bare rocks in spectacular overhanging positions. Since prehistoric times, the landscape has been a place of sanctity for the local inhabitants. The park contains rock paintings from the prehistoric period, as well as religious icons from the successive cultural periods, including two symbolic footprints of Lord Buddha. 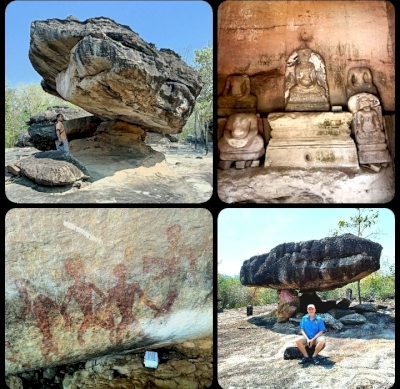 Phu Phra Bat (PPB) is an exemplary multi-layered cultural landscape set on a plateau rising up to 150 meters above the floor plain, and would make a great addition to the World Heritage list. What looks like well-formed dolmens at first sight are in fact magnificent works of nature through weathering. While it is in Udon Thani ---and together with Ban Chiang they form a good argument for the claim that the province sheltered the earliest civilization in Thailand--- we figured that it was easier to visit PPB from Nong Khai. Our accommodation, the Rim Riverside Guesthouse, offered to take us there for 1,000Bt, which was a very good deal. The owner, an avid cyclist, even said it is possible to get to PPB on a bike and that he had already done it a couple of times. What surprised me was the extent of the site and the number of interesting rock formations in place. I recall wanting to go here in 2013 and when I searched the internet, one practically only sees images of the iconic rock tower Hor Nang U-Sa and very little of everything else. Even the latest editions of some guidebooks do not even "highlight" it, perhaps due to its remoteness. So, my friend and I felt we saw more than what we expected.

Despite the instruction of the ticket man not to visit Wat Louk Koei (largest chambered rock temple in the park with well-preserved statues), we still took the 500m trek to the temple, only to find out that there was an excavation project taking place. We did not feel so bad about our 'intrusion' as those who were digging did not seem bothered by our presence.

Around Wat Louk Koei are sema stones (stone markers from the Dvaravati to Khmer periods demarcating Buddhist sacred grounds), which are also present around Hor Nang U-Sa, Kou Nang U-Sa (the "Thai Stonehenge" and one of my favorites due to its association to supposed legendary weaver -- I collect textiles), and the Kork Mah Noi (the last rock site if you follow the 2-hour circuit, and probably the most impressive for its almost impossible balancing feat).

Six rock shelters house pre-historic rock paintings of varying conditions. Tham Chang, Wat Pota, Heep Sob Porta, and the unlabeled rock formation beside Bor Num Nang U-Sa (an ancient stone well) have traces of red paintings. The most impressive of which are in Tham Wua and Tham Khon which sport human and bovine images, respectively, in relatively good condition. The last two are also close to Kork Mah Noi, making that section of the park the most memorable for us. If you are not a fan of trekking, there is a short cut to this section by taking the left turn before the ticket inspector's station early on.

There were a few local visitors who came in after us (we were the first ones to get in at 9:30am), but as soon as they have seen and taken photos of the central cluster were the main rock tower is, they turn around and leave. Hence, my friend and I had the pleasure of having some of the more interesting rock formations lying deeper in the park to ourselves. Despite the notorious Thailand heat (worse than the Philippines, btw), we still enjoyed the trek and even went up to Pha Sadet View Point. I equally find it charming that the rock formations have been named after characters of a certain folklore as this only fortifies the significance that the local people still attach to the site. Offerings can still be seen, so it is still an active religious space.

The rock overhangs and shelters created were home to various different tribes and groups over the centuries, and there's still traces of ancient occupation including rock art. Although nowhere near as impressive as other rock art we've seen in semi-nearby places like Bhimbetka (India) and Kakadu (Australia), it's still quite well preserved in places and you can see human and animal figures quite clearly.

The Buddha statues are mostly broken, and I think generally date to a later period of occupation so perhaps a little less signficant.

As a side-note, the bathrooms here are absolutely outstanding! For whatever reason, this tiny little unvisited spot in the middle of nowhere in Thailand has two freestanding toilet blocks, fitted out on par for what you'd expect at a 5-star hotel or Michelin-starred restaurant, complete with air conditioners and piped classical music! Bizarre. 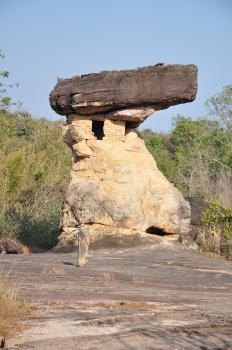 Thailand is planning to propose Phuphrabat as a World Heritage Site in 2016, the news really made me want to write the review of this strange historical park in the Northeastern part of this country near the city of Udonthani. My trip to Phuphrabat, the place actually sounds like Poo – Pa – Baht, was happened because I saw its picture when I visited Ban Chiang. The hotel arranged a car with driver for me to visit the place in the next morning. When I arrived in Phuphrabat Historical Park, I was surprised that the place was really quiet and no tourist at all. My driver and I walked into the forest which is a typical sight in this region, after 15 minutes, I started to see the strange shaped rock formation behind the trees.

The biggest and most stunning rock called U-Sa Tower. The rock shape looks like a big unfinished Winged Victory of Samothrace in my opinion, but for my driver a big mushroom. Ancient people also made a small room attached to the rock which made the rock more unique, similar to US’s Mesa Verde. In front of U-Sa Tower also have ancient standing stones which historians believed to be the symbol of sacred precinct for ancient ceremony. Then I continued my sightseeing to see more bizarre rocks that named as coffins of ancient royalties. I also saw ancient Buddhist rock cravings and rock arts which actually in my opinion not really interesting. Luckily I met a group of university history class students and their professor was willingly to explain the significance of the site. Later I found out that that professor is a very famous historian in Thailand. According to my guide, most of these bizarre rocks have unique purple color oxidization that really different from other rock in this region that ancient people linked the strange color with lotus petal, the symbolic flower of Buddhism, and that strengthened their belief that this area is a sacred precinct for not only in Thailand but including Laos. He also showed me many impressive ancient standing rock, most of them are taller than me. The guide pointed out that Phuphrabat has been used for religious practice since ancient time even before this region adopted Buddhism as their faith. He even mentioned that even today locals still come to practice Buddhist ceremony in Phuphrabat since I saw remains of candles on the ground.

Phuphrabat in my opinion is very unique place of Thailand or even in this region. The 3,000 years old human evidence with bizarre shaped rocks is very exotic and so African more than Asian sites. The site is not beautiful but very interesting to see, if you have a good guide. I am not sure for this place’s World Heritage Site worthiness, but pre-historical cultural site is much underrepresented in Southeast Asia mainland, apart from the Plain of Jars in Laos; Phuphrabat is a very good place to fill this gap.

I understand that there are two parts to this nomination. I however only visited the main part where all the strange rock formations are located.

This is an interesting site and it is still possible to find evidence of how the unusual rock formations with huge boulders balancing on often smaller ones were used for religious purposes. These rocks take their shapes apparently because of under-sea erosion that happened millions of years ago. Traces of prehistoric rock art can also be found on some of the rocks and a number of these paintings were hardly visible. It is almost necessary (unless one has done quite a bit of research and has a very sharp eye) to have a guide to point them out for the ordinary visitor. Someone had to actually point one such painting out with a long stick to me before I could see it. The kind man who pointed it out to me told me that it was an elephant but I had to stare at it for quite some time before I could even see that it sort of resembled an elephant.

The historical park is located entirely within a forest park although being in the "drier" (dryness in this case being a relative concept) part of Thailand it is not quite wild tropical Asia. It was nevertheless still a rather wild place and a snake basking on one of the rocks scared the living daylights out of my guide. I found the place rather enjoyable to visit and take a walk in (notwithstanding the presence of snakes basking so openly on rocks) even if the novelty of the weird rock formations wore off for me after a while. The park is also still somewhat off the beaten track for most travellers, as with northeastern Thailand in general, so they do not seem to get many international visitors there.