Paper Mill at Velké Losiny is part of the Tentative list of Czechia in order to qualify for inclusion in the World Heritage List.

The Paper Mill at Velké Losiny has been functional since the 16th century. It is dedicated to traditional handmade paper production. It comprises 8 historic buildings with their own role in the process. 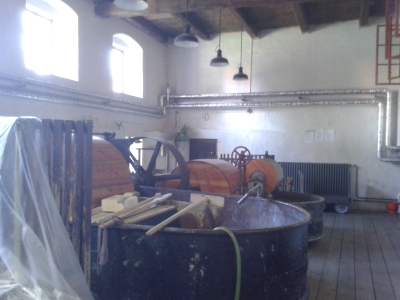 Velké Losiny is quite interesting village located in the broader region of Jeseníky Mountains, the highest mountains of Moravia. The important period for Velké Losiny is the late renaissance – 16-17th Century, when the dukes of Žerotín, who were of the protestant faith, founded a castle, a church, spas with mineral springs, and also a paper mill there. All these structures were further maintained and developed in the later periods, and thus survived to our days.

From the point of view of both exterior and interior, the castle belongs to the most authentic structures from the second half of 16th Century in Czechia. The church in the center of the village, built around 1600, is also very nice, and I would recommend to all church-enthusiasts visiting also nearby villages of Maršíkov and Žárová with wooden churches from the same period.

The focal point of all tourists is however the paper mill founded in 1596. Its white buildings from the 19th Century with typical dark wooden roofs are located by the busy road and cannot be missed (check the photo in the previous review). The place is ready for masses of tourists, mostly from Czechia but also from abroad. There are a parking lot, the restaurant Losín for hungry tourists and a shop with the hand-made paper souvenirs in the separate small buildings around the paper mill.

The most of the tourists go to the guided tour No.1 (around 1 hour), which includes the museum of paper, the gallery with pieces of art made from the local paper, the 10-minutes-long movie about the production of hand-made paper, and finally the short visit of the workshops, where the paper is produced (PHOTO). The tour is quite interesting and informative, and I enjoyed it. The tour number 2 is more specialized and goes to more technical parts of the manufacture.

The technology of the paper production is the same as it was centuries ago – it means that a sheet of paper is produced for several weeks (!) and all the steps including the preparation of the cellulose suspension, manual producing of sheets, pressing, curing, drying, mechanical treatment etc… are done at the place. Well, the technology is ancient, but the buildings are much younger, from the first half of the 19th Century as well as the machines and equipment for the paper production, with an exception of the old press from the beginning of 17th Century. The free drying under the roof is no more possible now because of the pollution from the outside, and the closed clean air circulation is used instead.

The paper produced in Velké Losiny is quite famous in Czechia, and all my 4 academic diplomas from the Charles University (the fifth that is the last one will hopefully come soon…) are printed on this hand-made paper. The quality (and the price as well) of this paper is incomparable to the standard one, but the paper mill by itself is not exceptional or unique (PHOTO – the workshop where the sheets of paper is produced from the paper suspension). If I may compare, for example the WHS Plantin-Moretus museum in Antwerp is unique and exceptional...
I do not think that the old paper mill bears any OUV, and it is of national importance only. The facts that it still utilizes the technology that was commonly used several centuries ago and that there are only few similar paper mills in Europe that have survived till now do not justify the inscription. I am also skeptical towards the serial nomination that is now in the preparation. I am not sure if the merging of several paper mills without the OUV into one project is helpful, in other words: 0 + 0 + 0 = 0. 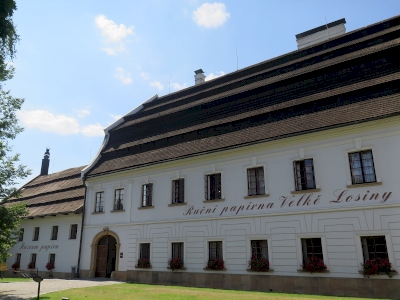 Handmade paper? I'm game. I bought a small supply of lovely paper from the shop and one would think this is a gimmick but some people actually order piles to their home and it took a long time to check out. Velké Losiny isn't unique in the world and there are several other locations in Europe that are similar so they finally started talking to other sites in Germany, Poland and France. A serial combination has a better chance and alone I would have dismissed it as "nice but not good enough". Now that this is perhaps a serious contender I felt to add a review after all.

Inside is a great museum. Keep in mind I went a couple of years ago and maybe things have changed but tours were only in Czech with audio guide in other languages. You can point at a dot in the room to start the info and they often don't show that clearly, something they should improve on. The information you get is good though. There are also 2 kind of tours, 30 and 60 minutes, unfortunately I don't quite remember which one I took.

The tour starts with information on paper, as we know it's a Chinese invention and they have Chinese cartoons to show it, cute. A chart shows the spread from China across the Middle-East and into southern Europe. The next parts of the museum are the machines used to make the paper in the mill. At one point you can also see the staff interact to flatten the paper - not easy work. Don't forget to visit the gift shop!

Czechia's mix of castles, old towns, nature, horse stables and now this thrown into the mix makes it diverse and interesting to visit.

The paper mill is an interesting building. It is the only remaining hand made paper mill in Czech republic. Visit is not so long so you can try to make your own paper after the visit :)

Other important sights are the Castle in Velke Losiny and two wooden churches from 1609 in villages Marikov (3km) and Razova (4km).

As well there are spa in the same village.