Vertical Vegetation Landscape and Volcanic Landscape in Changbai Mountain is part of the Tentative list of China in order to qualify for inclusion in the World Heritage List. 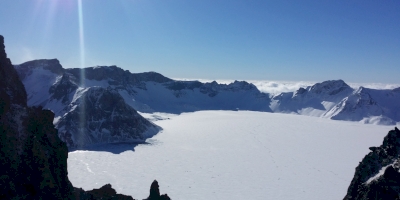 The long-dormant volcano of "Long White Mountain" is very hit and miss for viewing. Naturally winter is super cold up northeast China but summer brings lots of fog into the area. The entry fee to the park is also quite steep which all you can pretty much see is the Heavenly Lake after another paid bus ride. All this should be included if you get on an organized tour from Changchun or similar big towns nearby. Aside from strolling alongside the rim of the crater there isn't much to offer in the park, but having been on a tour maybe they just don't give you the chance to see anything else. It felt a little bit disappointing after driving so far and spending all the time queuing for the bus. A lot of people just quickly hide into the cafe/shop to escape from the cold up there. Even in summer you need to bring a light jacket to see the the world's highest volcanic crater lake. As a final note they are quite paranoid being next to North Korea here with army personnel stationed frequently and they want to ensure you do not cross the fenced off areas. I think technically the path goes all the way into North Korea so with some luck you can say you went to that hermit nation without doing an extra tour ;)