Old Synagogue and Mikveh in Erfurt - Testimonies of everyday life, religion and town history between change and continuity

Old Synagogue and Mikveh in Erfurt - Testimonies of everyday life, religion and town history between change and continuity is part of the Tentative list of Germany in order to qualify for inclusion in the World Heritage List.

Map of Old Synagogue and Mikveh in Erfurt - Testimonies of everyday life, religion and town history between change and continuity 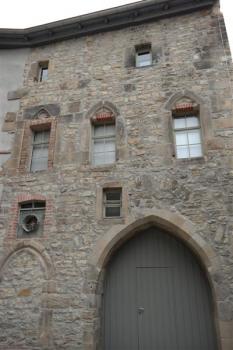 As mentioned in the review below, the building has not been used as synagogue for a very long time, but rather as warehouse and restaurant/ballroom. In the picture, you can still see the ventilation system from the restaurant. Because the building was no longer recognisable as a synagogue, it survived the Third Reich.

We visited the museum on a Tuesday to find out that the entrance was free (don't know if this true for every Tuesday), including a guided tour. The tour was given by two women, one specialist in judaism and one muslima who both explained the history of the synagogue & the rituals of both religions.

Although certainly interesting, we also feel that the site lacks outstanding universal value to be recognised as a WHS. 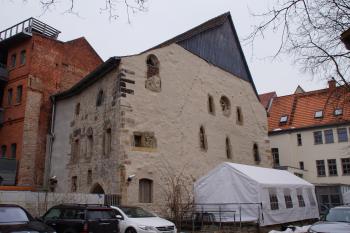 The subtitle sounds a bit overblown and boastful compared to what this T-list site actually includes, namely a synagogue, the ruins of a ritual bath and a secular building. The photo shows the synagogue, it is the same view as in the photo of the Wiki article and the same view as in almost all photos that can be found on the web, indicating that there is not much more to see. The oldest parts of the building have been dated back to the late 11th century, but nothing inside is reminiscent of the original use. At least the façade with the lancet windows and the rosette looks like a religious building. After the pogrom in 1349, the building was used as a warehouse for several centuries, later as a restaurant with a ballroom. Therefore, it was no longer recognisable as a synagogue for a long time. In the 1990s, the Old Synagogue was rediscovered, renovated in the following years, and opened as a museum in 2009. The museum shows medieval Hebrew manuscripts and models documenting the architectural history of the synagogue. The most important exhibit is the Erfurt Treasure, consisting of silver coins and gold and silver jewellery. The treasure was hidden by a wealthy Jew in 1349 and rediscovered in 1998. The ballroom from the 19th century can still be seen on the upper floor.

Not far from the synagogue is the ritual bath, or rather its ruins. The ruins were discovered and excavated only a few years ago. Today, the mikveh is overbuilt by a protective building and can only be visited with a (free) guided tour (weekly on Thursday afternoon). But you can take a look at the ruins through a small window on the roof of the building. I visited Erfurt in 2013 and took a guided tour. The mikveh is located at the banks of the River Gera, so it's only a few steps down to the bath. There is not more to see than the water basin and the side walls up to the height where the vaulting begins. Well, it's not worth to plan your trip according to the date of the guided tours.

Finally, the Stone House, a residential building in the centre of the old town, that once had Jewish owners. The T-list entry mentions that the interior has a painted beam ceiling and other unique architectural elements, but the house is not yet open to the public, thus I can not report on that. From the outside it's just an old building between other old buildings. Admittedly, it is the oldest wall, but can easily be overlooked and I had difficulties to identify the right house.

The three buildings are close together in the centre of the lovely old town and not far from the Krämerbrücke (a kind of northern version of the Ponte Vecchio). The remains are of a remarkable age, but that's the most impressive about them.

It has been proposed to combine the nominations of the ShUM cities and from Erfurt, but I don't think that this would be an improvement. There is no obvious connection between them. The strength of the ShUM nomination is the proven significance for the development of Ashkenazi Judaism, the extension by Erfurt would rather weaken the proposal. In contrast, the sites in Erfurt have been rediscovered only recently and further research is needed to reveal their historical background. Thus the Erfurt approach is more general: to testify “everyday life, religion and town history”. However, I doubt that the sites have the quality to tell a compelling story and meet this ambitious claim.

Unesco Website: Old Synagogue and Mikveh in Erfurt - Testimonies of everyday life, religion and town history between change and continuity

Old Synagogue and Mikveh in Erfurt - Testimonies of everyday life, religion and town history between change and continuity (T)