Jerash Archaeological City (Ancient Meeting Place of East and West) is part of the Tentative list of Jordan in order to qualify for inclusion in the World Heritage List.

The archaeological site of Jerash (Gerasa) comprises one of the largest and best preserved Greco-Roman cities. The site has been excavated since the 1920s. Its extensive remains include an oval plaza surrounded by a colonnade, a long colonnaded street, two sanctuaries, two theatres, communal baths, a hippodrome and an arch. 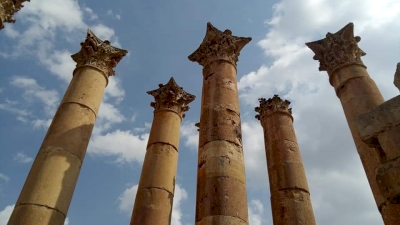 In April 2018, my trip to the Holy Land brought me to many T-list sites, but only one was truly a highlight for me. I still don't understand how this place isn't already a WHS as it's one of the finest Roman cities left in the world today. Of course, I'm talking about Jerash.

Jerash is an outstanding site in the Middle East. From the entrance to the North Theatre, it's around 2 kilometers' walk. And that's not the true end of the Roman city yet. The modern city of Jerash surrounds the archaeological complex on all sides, and it's still normal for its inhabitants to find artifacts and remains under their houses. The archaeological complex itself, though, is big enough and fascinating enough that I simply forgot about the modern city around. Either way, it doesn't take much imagination to bring back the Roman times when the ruins of Jerash were a center of trade and culture.

From the parking lot, I passed through a slightly annoying little tourist bazaar befire finally coming to the first landmark of Jerash: Hadrian's Arch. It towered high over all the visitors it welcomed to the great city. Its design is impressively intricate, especially the windows and the pediment. Going through the arch, I went on to the Hippodrome, which still has its chambers around it well-preserved. Across the trail is a Byzantine church with its mosaic floor still intact. I continue to the South Gate, the gate to what would be the city center. There is a museum here, and the guards check the tickets here before you can go through the gate. And right through the gate is the heart of ancient Jerash.

To the left are chambers displaying some of the frescoes of the site. On the hill above it towers the majestic Temple of Zeus, which with its forest of columns is a wonder on its own. Behind it lies the South Theatre, the larger, brown sandstone theatre of the city, and it's quite crowded, but you can still test out the extraordinary acoustics of the theatre. I can personally testify to hearing someone speaking from the most central tile from the top of the vast theater. It's even bigger than the one in Bet Shean, and with a much better-preserved stage and walls. However, my favorite part is just straight ahead of the South Gate: the Oval Plaza. With its monumental feel, towering centerpiece, and the surrounding pillars, I felt for a moment like I was in the Vatican City.

I continued along the upper path from the theatre, which had a great view of the whole complex. It leads straight to the Temple of Artemis and the smaller North Theatre, made of white marble. One may also make a small detour to see more Byzantine church ruins and mosaics further up the hill, but I didn't take that option. The Temple of Artemis, though smaller than that of Zeus, is just as impressive with the back wall still intact. The surrounding area is also a forest of columns and is great fun to wonder about, though the original structures are unclear. Finally, the path goes down to meet the Cardo Maximus itself. The Cardo is an impressive street, about a kilometer long between the North Gate and the Oval Plaza. Chariot marks on the pavements show the bustling activity on this street. The surrounding commercial structures are also quite well-preserved. Despite the ruined state, it really feels like a bustling city, though maybe that's the effect of the crowd as well. Either way, Jerash is remarkably alive after all these years.

Jerash is by far the finest Roman city I've ever seen, though I haven't seen so many yet. Its ruins, in my humble opinion, rival Rome itself in terms of grandeur, extensiveness, and state of preservation. It's just hard not to be impressed by the majesty of the temples, theatres, and streets. From research, only a handful of Roman cities are up to par with Jerash, and pretty much all of them have been inscribed on the list many years ago. I just don't see why Jerash didn't meet the same fate. Simply put, it is World Heritage quality, and it is inexcusable for it to remain off the list for much longer. That's just the truth, enough said.

In October 2018, I made a day trip from Amman to Jerash, one of the largest and most well preserved Roman ruins outside Rome, and the second most inexcusable omission by UNESCO from its list of World Heritage Sites (after the temples of Bagan).

I visited this great site in April 2009. I too cannot believe such a grand Roman site has been left out of the list. It is one of the most complete Roman cities in the world and more funds are needed to continue the archaeological work to continue uncovering the rest of the remains which are still buried. The chariot race renactment was very interesting and was a great ending to my visit. I'd suggest you hire a local guide once you arrive there. Ours was very knowledgable and gave us an in-depth overview of the place and its importance. I hope that this site becomes a WHS some day because it really deserves it.

After Petra, Jerash must be the next most popular tourist destination in Jordan. I visited it on a day trip from Madaba, using my rental car to navigate through the busy and seemingly neverending suburbs of Amman.

It's a bit of a mystery why the former Roman city of Jerash (Gerasa) has been left out of the World Heritage List in the early stages. It surely is one of the most complete remains of a Roman (colonial) city that I have seen. And believe me - I have seen many!

Features that stand out here are the oval Forum, the 800m long and very intact (Pompeii-like) Cardo Maximus, and the lovely intimate North Theatre. Hundreds of pillars adorn the Forum, the streets and the temples . They have been put upright during the restorations I guess, and sometimes even pieced together again. The quality and completeness of the constructions and objects is so high that it is sometimes too good to be true. Especially both theatres have been restored almost completely to perfection - I would not be amazed that ICOMOS had something to say about that.

It's a very fine site to visit for a couple of hours, and it would be a worthy WHS. Entrance costs 8 JD (8,80 EUR). The site receives lots of visitors each day, including tour groups from all over the world.

This for sure will be once listed on the main WHS list. One of the most remarkable ancient places can be compared only with Palmyra or Baalbek. You can see complete layout of ancient big town with two thatres, palaces, temples, agoras, stadium, streets, arches, houses and town walls. It is advised to spare full day to see all sights there, in sunny days take plenty of water with you but there is a small restaurant on the spot as well as other amenities.