Fishpond Network in the Trebon Basin

Fishpond Network in the Trebon Basin is part of the Tentative list of Czechia in order to qualify for inclusion in the World Heritage List.

Map of Fishpond Network in the Trebon Basin 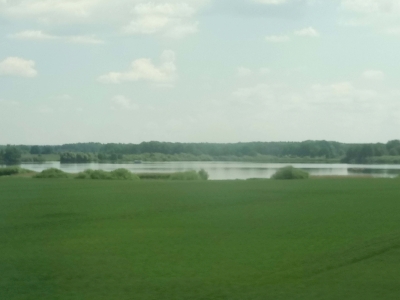 I was taking a Flix bus from Brno, Czechia, to Linz, Austria, and this bus went through 3 WHSs (Trebic, Telc, Cesky Krumlov) and 1 TWHS that is Fishpond Network in the Trebon Basin.  I had been to all the 3 WHSs before on two different occasions. It seemed like groups of Chinese tourists were using this bus line to go from one WHS to another.

But I did not go into the town center of Trebon because the bus station in Trebon is a little farther out (500m?) from the center.

Still, I was able to take this photo of Svet Pond, one of the 5 sites included in the nomination, from the bus when it was running on E49.

I don't know the boundary of this nomination, so I'm not sure if I can claim that I was there, but I got to read about this site and understood the way the carps the Czech people ate on Christmas were supplied.  This site would be a unique one if it gets on the WH list. 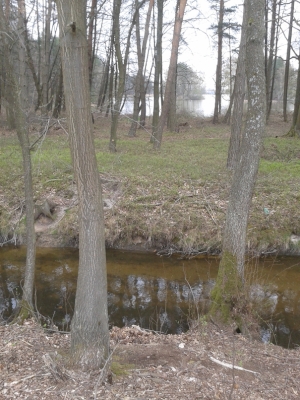 Třeboňsko fishpond landscape is one of very few cultural landscapes in Central Europe that would deserve the WHS status. Třeboňsko region, now protected natural area and the UNESCO Biospheric reservation, was intensively cultivated since 14th century, but the most extensive works occurred in 16th century. Due to flat geomorphology and plenty of water, the area used to be vast marchlands covered by thick forests before the colonization in 12th century. Most of wetlands were turned to fishponds (all together over 500 fishponds of diverse sizes) with very sophisticated water management.

The largest fishpond is Rožmberk with original area around 1000 ha (now 490 ha) built by Jakub Krčín z Jelčan in 1584-1589. Seventy-six oaks of age upto 400 years strengthen the 2.4 km long embankment. The most prominent work for the water management is Zlatá Stoka (Golden Canal), which is 46.2 km long, wide 2-4 m, deep 1-1.5 m, slope 30m, and built in 1508-1518 by Štěpánek Netolický. Besides works for the water management, the historical center of the area, town Třeboň, was also included to the series. It has an intact town center with prolonged square, houses with porticoes, a castle, and preserved fortification (the ponds were also utilized for this purposes). Třeboň is somehow similar to WHS Telč, but it has different fleur.

(The main altar of the gothic Augustinian church in Třeboň was originally decorated by paintings of the Master of Třeboň Altar from 14th century, now in National Gallery in Prague. It is magnificent gothic work, impact of which is comparable to Giotto according some scholars.)

Due to the picturesque landscape with plenty of fishponds and small villages, Třeboňsko region is very popular summer holiday destination, and I visited it many times already. Not all of fishponds are suitable for swimming, but some of them are. Besides swimming, one can walk or cycle around, pick mushrooms and blueberries, etc.

Several natural reserves protecting original marshlands, not remodeled to fishponds and thus not included to the proposed fishpond landscape, are also accessible for visitors such as Červené Blato in the southern part of Třeboňsko protected area.

The advice from UNESCO authorities on the original nomination in 2005 was that the state party was encouraged to significantly extend the number of nominated components, which was only six: 1 town (Třeboň), 3 canals (Zlatá Stoka = Golden Canal, Nová Řeka = New River, and Stará Řeka = Old River), and 2 fishponds (Rožmberk fishpond, and Svět fishpond). Due to the lobby of "fish industry", the extension has been stopped. They were afraid that the inscription would have a negative impact on their business. On the other hand, the OUV of this TWHS is directly based on the production of fish and not on protection of natural beauties. It means that the nomination process should be done in cooperation of all affected sites.

As the nomination process started in 2001 and was deferred in 2005, I am skeptical concerning smooth inscription. However, the project that includes the entire Třeboňsko region as "The Třeboňsko Fishpond Landscape" with ambitions becoming WHS was announced by Ministry of Environment in 2015. We will see...

PHOTO: Part of Golden Canal in front of one of many fishponds in northern part of Třebonsko landscape. Golden Canal snakes through the landscape around fishponds and marshlands, which have different water-level as compared to the Canal. The Golden Canal is not of very high esthetical qualities, but it is purely utilitarian work. It is called Golden because of high commercial profit for the owner. It is incredible that it is in operation already 500 years.

I can admit that I see a big potential in this site. The fishponds around Třeboň are ones of the oldest in Europe, and some of them are really huge and still in use. The first fishpond was created in 14th century but the big transformation of the area started one century later when Peter IV of Rožmberk invited German fishermen. In the city itself and around there are lots of boards with information about this area (also in English and German). You can rent a bicycle and spent a day cycling around the ponds. The tourist information center distributes some useful maps and can arrange a guided tour of the chateau.

Třeboň is just a half an hour by bus from České Budějovice; in the morning you can visit WHS Holašovice, come back to České Budějovice and then take another bus and spend an afternoon in Třeboň. Český Krumlov is another WHS very close to fishponds but there’s not direct public transportation between both sites – you have to change again in CB.