Cultural Landscape of Canyon in Kamenets-Podilsk

Cultural Landscape of Canyon in Kamenets-Podilsk is part of the Tentative list of Ukraine in order to qualify for inclusion in the World Heritage List.

The Cultural Landscape of Canyon in Kamenets-Podilsk includes the castle and historic centre of Kamenets -Podolsk in the Khmelnytskyi Oblast in western Ukraine. The town is almost completely surrounded by a meander of the river Smotrych, which has cut a canyon about 60 m deep into the limestone. The buildings of the old town and fortifications date from the 11th to 18th centuries.

Map of Cultural Landscape of Canyon in Kamenets-Podilsk

Times are weird. It is less than 8 month ago that I visited Ukraine. I never got around to write this review, before the war started. And now it feels like writing about a past gone by.

In the summer of 2021, I travelled across Europe from Hamburg to Bucharest and on to Suceava. I stayed in the European Union, wary of travel restrictions and being stuck in quarantine. As last stop, though, I crossed the border at Suceava into Ukraine. I have a fondness of stamps in my passport and stepping outside of the EU felt like an adventure. Chernivtsi was an obvious stop being across the border from Suceava. I had also read Juha's review. Canyon, castle and marshrutka sounded lik a winning combination.

The town is split in three parts: the new town (rather boring, but green), the old town across the canyon on a rocky hill and the castle on yet another rocky hill, all connected by bridges. The old town is bordered on both sides by rivers, creating a strong natural defensive position. The defensive position is augmented via plenty of fortifications. Best parts are on the western side of the old town. There are townhouses, garrisons and churches to accompany the old town.

The most touristy part is the castle, pictured by both Juha and Tsunami. Side note: I somehow lost my pictures of the place. The castle is big and when I visited a medieval fair was ongoing. It was quite popular with local tourists. Personally, I felt reminded of Pskov.

I share Juha's and Tsunami's opinion, that most European countries would have nominated Kamenets-Podilsk already. It is a nice fortification and castle plus old town and has a distinct Eastern European feel. Small caveat: The city was undergoing renovations at the time of my visit. I assumed Ukraine was preparing a nomination in earnest.

Caveat: While the war is ongoing, the getting there bit section is a bit pointless. Hopefully, this information will become relevant again.

I visited as a day trip from Chernivtsi. The bus station in Chernivtsi is to the South of the city centre. You can take a local bus to get to the bus terminal. The schedule of the bus going to Kamjanez-Podilskyj isn't available online. I would recommend going early and waiting for the next bus. Or go the day prior and check the current time table.

In Kamjanez-Podilskyj, the bus station is in the new town (check google maps). From there, you have to walk 30min to get to the old town. Again, schedules are hard to get by, so just go to the station and hope and pray to catch a connection. On my return, major roadworks were ongoing and we spent one hour at least in a terrible traffic jam. 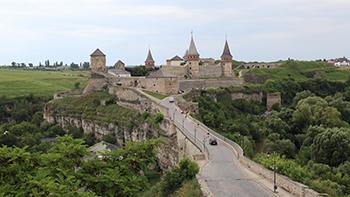 Site visited July 2013. Kamyanets-Podilsky was a pleasant surprise. This site really deserves to be inscribed. It is not to be missed if you travel in Western Ukraine.

Kamyanets-Podilsky is one of the best, or at least one of the most interesting, sights in Ukraine but unfortunately many people haven’t even heard of it because it is clearly off the tourist track. There are three things that make this place worth a visit: the old town, the castle, and the most importantly, the breathtaking landscape.

I made a day trip to Kamyanets-Podilsky from Chernivtsi. A trip by marshrutka takes less than two hours. Along the route it is possible to visit another impressive castle, Khotyn fortress. From the Kamyanets-Podilsky bus station it is about three kilometers to the old town and the castle.

At the site the landscape is dramatic and almost fairy-tale-like. It has a great setting with deep and lushly vegetated river canyon which completely encircles the old city. It makes the area of the old city a natural fortress. The old town is located in the loop of the River Smotrych. At the bottom of the loop is the castle and the old bridge.

The castle, the oldest parts of which are from the 14th century, is in a quite poor condition but it is a good place for enjoying the sceneries. From the towers there are panoramic views over the old city and the river canyon. I had a lunch in the courtyard of the castle where people were roasting meat and boiling potatoes.

The bridge that connects castle with the old city is told to be the oldest in Ukraine and made by Turks. Since the ancient times the old city of Kamyanets-Podilsky is home to many ethnic communities. Armenians, Poles, Jews, Greeks and Russians all have their own quarters and churches. Overall, there are lots of different types of churches in such a compact city.

I totally agree with the earlier reviewer that if this kind of site was in some Central European country it would have been inscribed a long time ago. The landscape with ”wow” factor, the castle with great setting and old city with rich history and many ethnic communities make this site unique. The old city and the castle need some restoration. Otherwise Kamyanets-Podilsky would be a great addition to the World Heritage List. 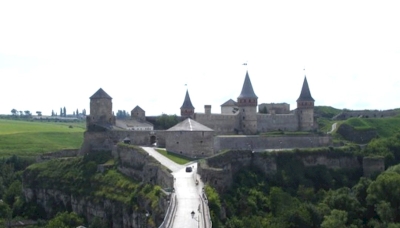 Out of over 500 cities I have visited in Europe, this site puzzles me the most in regard to why it has not been inscribed on the list yet. I believe it has been in nomination over 2 decades. The natural setting on which this cultural town sits is so unusual and therefore so mind-boggling. It has to be the politics, although I don't know the politics. Preservation works have been underway but would probably take years to complete. It's unfortunate that, since this town is located in the middle of nowhere with no ohter attractions nearby, very few foreigners visit this site. I'd say if this town were in Western Europe, say in France, it would be as big a tourist attraction as Mont-Saint-Michel or Carcassonne. So the town wouldn't get much money from tourists, either. It's all the more reason why the UNESCO should inscribe it and protect/preserve it as soon as possible.

There is a bus that directly runs from Prague through Poland to Kamenets-Podilsk in western Ukraine. The two cities are the terminus of the line. This line goes through several WHSs, such as Wroclaw, Krakow, and Lviv.

There is also a bus that directly runs from Prague through Slovakia to Rakhiv near the Beech Forest WHS area in western Ukraine.

This may not be so surprising in light of the fact that the country of Czechoslovakia extended all the way to the current western Ukraine in early 20th century.