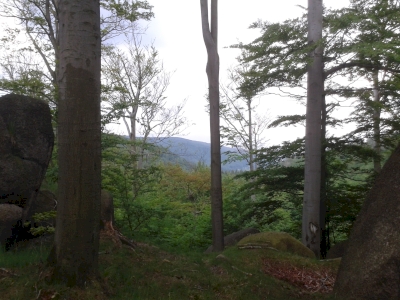 Firstly, I was in shock when I found out that the beech forests of Jizerské hory Mountains are to be included to the giant project of Ancient and Primeval Forests of Europe. Now, I like this nomination more and more. "Jizerské hory" are located in the fromer Sudetenland in northern part of Czechia. Although this part of Czechia is very interesting, it was heavily afected in the last century: (i) Once highly developed region with textile and glass industry (bijouterie/imitation jewelry from Jablonec nad Nisou was world famous with quality that Swarovski can only dream about) were turned into "not such developed region" by an expulsion of German minority after WWII, and this is visible even today. (ii) In 80-90s of 20th century, the large pine forest areas of Jizerské hory and Krušné hory (Erzgebirge) were killed by sulphur- and nitrogen-oxides air pollution from heavy industry of Czechoslovakia, Poland, and East Germany. Thus, this is a region of big contrasts. The forests in the area are mostly regenerated, so, do not expect disastrous place nowadays.

The large beech forests are located on the rocky northern edge of the plateau, and can be reached for example from the pilgrim place Hejnice with interesting baroque church. One can see there the viewpoint Ořešník on the granite rock accesible by red tourist trail. The beech forest of the National reserve are one of the finest in Czechia, but I think that the area is only little know for that. Fortunately, beech trees are more resistant to polution than pine forests.

I re-visited the site in June 2021 just before the realease of the IUCN evaluation. It was an uncomplicated day trip from Prague (excellent bus connection to Liberec, and then to Oldřichovice v Hájích by local train - there are marked trails uphill to the site: National Natural Reserve Jizera Mountains Beech Forests). I must say that I was pretty impressed by the quality of the forest and its ecosystem I found at the site. Several parts of this component have very similar character to the sites in Carpathiens. Nevertheless, they are at the same time very different because of the difference in geology.

The Natural Reserve and its buffer zone (all together ca. 2000 ha) encompasses almost 17 km long range and I walked around/through at least half of it during my last visit. Only the parts around Poledník Mt. (PHOTO) and Štolpichy canyons (444 ha) are proposed as the core zone, and the rest is planned as the buffer zone. The strength of the site lays in its size and diversity. Even though no genuine virgin forest survived there, quite large parts have very natural character (the core zone) and the entire site has very promising perspective for becoming natural forests in one-two hundreds years. Another important point is that the site is surrounded by other protected mountainous areas. Furthermore, there are increasing numbers of carnivores (lynx and wolves) which are essential for the beech forest ecosystem. The site is interesting also for beech forest laymen because of very numerous rocks, thus, it is not just a huge boring forest.

All in all, the proposed site is of a very high quality and deserves the WHS status.

Unesco Website: Ancient and Primeval Beech Forests of the Carpathians and Other Regions of Europe - extension (Czechia)