Bussaco cultural landscape is part of the Tentative list of Portugal in order to qualify for inclusion in the World Heritage List.

The Desert of the Discalced Carmelites is a cultural landscape in the Serra do Bussaco, created by the planting of exotic and indigenous species and the construction of numerous religious buildings such as chapels, hermitages, and fountains. In 1628, the Discalced Carmelites Order built the Santa Cruz Monastery and separated the forest from the outside world with a high wall. At the end of the 19th century, large parts of the monastery were demolished to make room for a royal summer residence in the neo-Manueline style, today the Palace Hotel Bussaco. 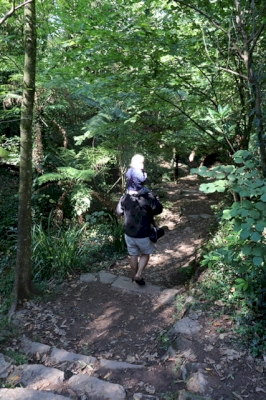 October 2020 - going south from Porto to Lisbon we still had a few spots to visit in between. Before going to Coimbra that day we drove into the national park of bussaco. You can buy a car ticket at the entrance booth for reasonable 5€. We drove up to the palace hotel and first had a long hike through the Tasmanian and American forests and found a mysterious cascade with water dripping downwards. Many exotic plants and trees are standing here and especially the many ferns make this spot look like a moderate-climate jungle. We did have a map but the paths are in very Bad shape so we found ourselves crawling under fallen trees or jumping over branches. Somehow we made it to the top again and still had time to circle the palace hotel. It was undergoing renovation which seems more than overdue. In the garden are wooden carved snails to ride on and a toy train, so we had some family time! The cafe has very good cappuccino and pastels de nata again. All in all a mysterious, totally Whs deserving spot which just needs a Bit more conservation. At least I could give small support. 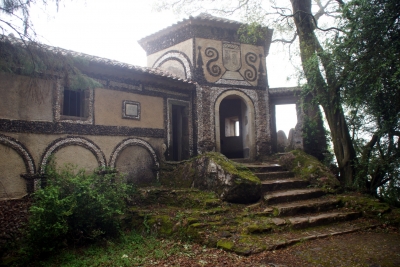 The Mata Nacional do Buçaco is located 550 meters above sea level at the highest point of the Serra do Buçaco mountain range. The forest area is surrounded by a high, 5-kilometre-long wall. Actually, it is an arboretum with a multitude of endemic trees and shrubs and exotic species brought by the Portuguese seafarers from the colonies.

Coming from Coimbra I arrived in the forest in the morning and in the thick fog, which often seems to occur in Buçaco. I entered the forest through one of the eleven gates and paid 5 euros for parking, the entrance is free for pedestrians and cyclists (you can also park the car outside the walls).
In the centre of the park is the neo-Manueline Buçaco Palace, built for the last Portuguese king. Today the palace is a 5-star hotel, I could only take a short look into the entrance hall and the restaurant, looks nobel and luxurious. From the outside it has similarities with the Quinta da Regaleira Palace in Sintra.
Right next to the Palace is the former Convento de Santa Cruz do Buçaco, or rather its remains. Large parts were destroyed for the construction of the Buçaco Palace or are today integrated into the hotel complex. The chapel of the convent has been preserved, but unfortunately it was closed for renovations. The façade is decorated with black-white mosaics and looks quite nice.
There are a number of hiking trails starting at the palace, I chose the Via Sacra up to the highest point in the forest, the Cruz Alta. Unfortunately, many of the small chapels and ermidas along the trail are in poor state of preservation. The photo shows one of the larger and better preserved buildings. The area between Cruz Alta and the Porta de Coimbra, called Adernal, is supposed to be the most picturesque part of Buçaco. The fog was still dense, that gave my hike a bit of a spooky atmosphere.
The Buçaco Park is a dense wood, more like a primeval forest than a landscape garden, there are not many buildings apart from the palace and the chapels along Via Sacra. Worth mentioning is the Fonte Fria, where you can follow the water over 140 steps downhill to an artificial pond.

If the Buçaco Forest were in the Sintra mountains, it would be just one among many parks, and not the most popular I guess. Manueline architecture, monasteries and parks are already well represented on the Portuguese WH list and by better examples. The biodiversity of trees and shrubs in Buçaco could be of outstanding value, I'm not an expert in this field, but I doubt that this would justify an inscription. Maybe my assessment would be less negative if I had visited the forest in better weather and if I could have enjoyed the viewpoints, but in my opinion this tentative site does not provide additional value to the World Heritage list. 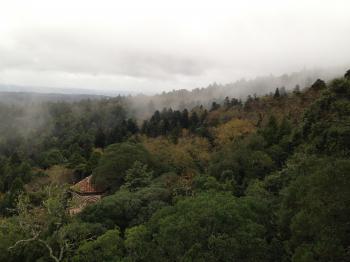 If you still have a day to spend a Coimbra, choose Mata National do Bucaco – the green heart of Portugal. It is only 50 minute bus ride from the main bus station. The bus will stop in the center of this national forest, by the kitschy, neo_Manueline summer royal palace built in the beginning of XX century and resembling to palaces of Sintra. The royal family could enjoy this palace only for 3 years – 1910 was the end of royal reigning in Portugal. Now it is a pretty expensive hotel where you can have a cup of tea or coffee if you want to see the interior, only the restuarant. Adjacent to the palace are the remains of Convento dos Carmelites: old church turned into museum now.

The hill on which the forest is situated was occupied by Benedictine monks as early as VI c., but that were the Carmelite who made this forest valuable. They came here at the beginning of XVII c. and encompassed it with a big wall to protect all kinds of plants, indigenous and brought from Americas. No woman was allowed to enter the forest! In 1643 a bull of pope Urban VIII threatens with excommunication any person cutting or harming the trees. The Carmelite monks marked out the Via Sacra and built some chapels with natural size presentaion of the Crusifixion scenes (they are not in as good condition as the ones in Varallo, Italy). There are also some nice fountains and ponds. It is a perfect place for a picnic.

I spent there 5 hours and came back to Coimbra by train from Luso, a spa town located downhill to the north.