Ensemble of Alvaro Siza's Architecture Works in Portugal is part of the Tentative list of Portugal in order to qualify for inclusion in the World Heritage List.

Map of Ensemble of Alvaro Siza's Architecture Works in Portugal 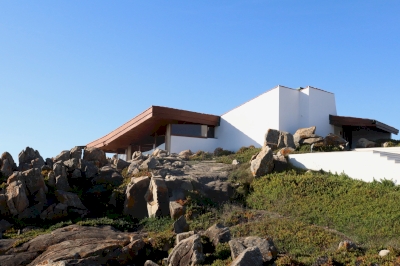 October 2020 - I am a big fan of modern architecture, inspired by Bauhaus and Corbusier. But this nomination might be a bit early for an architect who is still living and working. The Corbusier WHS is encompassing his most striking buildings in the world, this nomination whereas just lists almost anything Alvaro Siza built within Portugal. Anyway we enjoyed the few buildings we saw. The Portugal Pavillon of Expo 98 has a majestic roof reminiscing a cloth blanket. Unfortunately we missed the housing estate in Evora, which I regret. But we have also visited the bank in Vila Conde, the Piscinas de Mare, which were in renovation, and the Casa de Cha de Boa Nova. A beauty! As iconic as Frank Lloyd Wrights Falling Water. We spent the night on the parking lot next to the Teahouse and got to see it at three different times of day. Did not have the pocket money for dinner there though. This building will make it onto the list at some point. In whatever constellation. 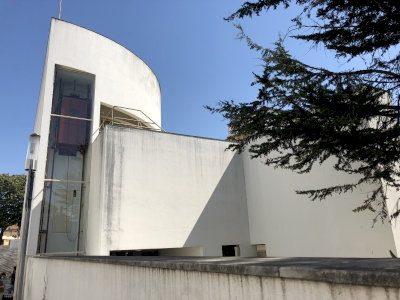 Álvaro Siza Vieira is seen by some as one of the greatest living architects. Despite the fairly recent deaths of contemporaries IM Pei and Zaha Hadid, he still has to beat the likes of Frank Gehry, Renzo Piano, Norman Foster, Rem Koolhaas and Moshe Safdie to receive that honour. He won the prestigious Pritzker Prize already in 1992. But I find it doubtful that his reputation would be enough for a WH recognition: what has his influence been on the work of others for example? And which of his works do really stand out? Certainly the current list of 22 works would need a lot of trimming to be convincing. 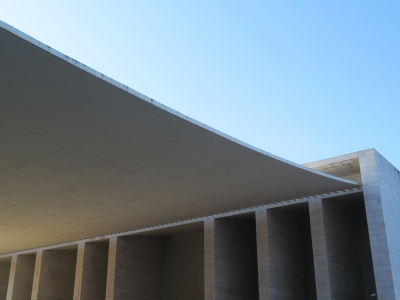 On my last night in Portugal I had booked a hotel in Lisbon, near the airport, just South of Vasco da Gama Bridge. This area is known as Parque das Nações (newly created district, 2012) and its a vastly different area of Lisbon. In this Northeast area along the Tagus River, you can see the massive bridge (longest bridge in Europe). There is also a plethora of venues for music, art, and culture.

This is the setting we find Alvaro Siza's "Pavilion of Portugal". In some sense this is New Lisbon, in part a product of the 98' World Expo. The Pavilion itself is quite unique, its design elements have been described with an "enormous and impossibly thin concrete canopy, draped effortlessly between two mighty porticoes." This is an accurate description. My picture partly captures this, but not perfectly. This public venue seems well-used as a musical and cultural space. As I visited the Pavilion, workers were preparing for a large concert.

The setting is excellent, the nearby esplanade on the water and museums all made a fine area to walk. For any architectural enthusiast, this site and other works by Alvaro Siza should be interesting. A living modernist architect of whom's work spans seven decades, perhaps this can be seen as exceptional? 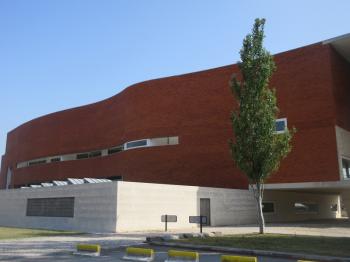 Driving the most popular motorway Lisbon-Porto we made a quick detour to see the university campus in Aveiro, especially its library building, placed on Portuguese T-List. The library, according to the description of the proposal, is one of the best examples of Alvaro Siza's architectural style. I am not familiar with modern architecture and I have not heard about Alvaro Siza before, but I liked the library building and the whole campus. In style and atmosphere it is so different from (not so distant) University of Coimbra but if I was a student again, I might consider these two places equally. I am not aware how many buildings of the Aveiro University have been designed by (or in cooperation with) Alvaro Siza, but the library building is similar in style to all other edifices of the campus. The library building can be seen from outside, taking photographs is not allowed inside (and as a visitor you can only enter the lobby). Although all my family liked the visit, being ignorants in modern architecture we could not understand the potential outstanding universal value of the place.