Tushpa/Van Fortress, the Mound and the Old City of Van is part of the Tentative list of Turkey in order to qualify for inclusion in the World Heritage List.

Tushpa was the capital city of the Urartians (the Kingdom of Van in present Eastern Anatolia) from the 9th century BC to the 6th century BC. The early settlement was centered on the steep-sided bluff now known as Van Castle. Here have been found Urartian cuneiform inscriptions dating to the 8th and 7th centuries BC. The Old City of Van lies to the south of Van Fortress and was inhabited from the thirteenth to the twentieth century. 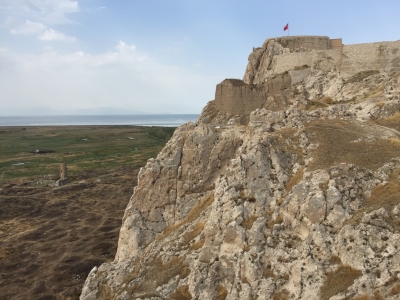 Tushpa/Van Fortress (Van Kelasi in Turkish) and the Old City of Van is a site is located in the city of Van, which is easily reached by cheap domestic flights from Istanbul. It in the western outskirts of the city, near the lakeshore, visible from far away. Entrance to the site is on its western end, which is inconvenient if walking from Van city. Entrance fee is 6 TL. The site can also be entered from the East, but necessitates jumping above a small wall, and walking uphill.

Tushpa was the capital city of Urartian Kingdom, from the ninth to the sixth centuries BC. The kingdom was centered around Lake Van and built the first fortress on a high conglomerate mound about 100 meters high and 1.4 km long on the southern shore of Lake Van. It was a very fertile region and was occupied front Early Bronze Age. Successive states (Armenian, Romans, Sassanid, Byzantines, Arab, Seldjuk, Ottoman, Russian) built and rebuilt fortresses of top of its predecessor.  Nowadays, foundations, walls, fortifications, tombs and buildings of those different ages mix with one another, including 10-meters high Ottoman fortifications (top of my picture) and older mud-and-stone-bricked fortification from the Uratian time (just below on the left of my picture).

From the top of fortress hill, the view is great on the lake, on the modern city of Van, and its surrounding mountains, and, down below, on the ruins of the razed-to-the ground Old City of Van.

The Old City (at the bottom of the picture) was surrounded by walls in three directions and consisted of streets with single or two storied houses, mosques, churches and other buildings. It had been inhabited from the thirteenth, with a multi-cultural atmosphere, until it was razed to the ground during World War I and the Armenian Genocide (the nomination file only mentions the “Russian invasion”). The city of Van was later rebuilt to the east. Nowadays, the Old City is better viewed from the fortress, as only the layout of the city can still be seen except for rare ruins of a few mosque minarets.

A two storied house was reconstructed near the visitors’ center (not to be confused with Van Museum, still not opened in November 2018). It was closed the day I visited, but travel guides say a Van cat lives in this house (Van cats are a local breed of cats with odd eyes and a fondness to water).

The visit to this site is easy once in Van, and rewarding with 360° great views of the area. The razed Old City is however a grim reminder of the area's troubled recent past. Sunrise and sunset are best times to visit. OUV is in my opinion certain.

Unesco Website: Tushpa/Van Fortress, the Mound and the Old City of Van

Tushpa/Van Fortress, the Mound and the Old City of Van (T)