Hala Sultan Tekke and the Larnaka Salt Lake Complex is part of the Tentative list of Cyprus in order to qualify for inclusion in the World Heritage List.

The Larnaka Salt Lakes comprise a wetland area with an Islamic monument on its banks. The Mosque and Tekke complex was built on the spot of the 7th century burial site of Umm Haram (an aunt and one of the companions of the Prophet Mohammed). It evolved into a shrine under Ottoman rule in the 19th century. The Salt Lakes see high numbers of waterfowl in winter; the water evaporates in summer and leaves a crust of salt. 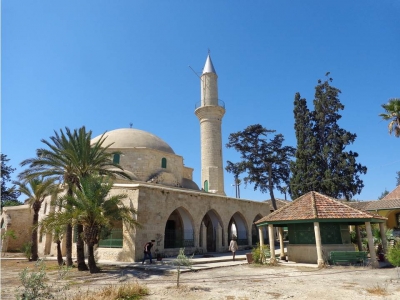 Salt Lake of Larnaka is located immediately at the south of the city, and even closer to the international airport, with the mosque on its shore. According to tradition, the aunt of prophet Mohammed died here, falling from her mule during an Arabic raid on the Cyprus island in seventh century. It has been since then a sacred place for Muslim people, but the mosque that can be visited nowadays was built later on, when Ottoman people ruled the island.

One enters the complex through an old gate, which gives access to a nice courtyard with flowers, with the mosque entrance on the right side. The tomb (tekke) of the aunt can be seen in a backroom accessible from the prayer room. Remains of an old cemetery can be seen at the back of the mosque. The building is nice and well maintained, the place is quiet, but the building itself has no special features and there are many like this one in countries that were rules by Ottomans.

The lake is easily accessible from the car park of the mosque. It was quite disappointing. Most birds had already flown away (we visited end of March), in particular the flamingos that our children would have enjoyed to watch. (Flamingos where still in North Cyprus during our trip but had gone from South Cyprus). Many such salt lakes can be seen on the shores of the Mediterranean see, and we found nothing special to that one. The road from Larnaka city centre to the airport even cuts the southern part of the lake, so I believe many other lakes are better preserved.

This tentative site is proposed with cultural and natural criterias, but the link between them was not obvious to us (it is just that the mosque and the lake are at the same place), and even considering them separately, we believe it will be difficult for this tentative site to gain inscription one day.

The mosque is very well signposted and easy to find and park. Entrance is free with wide opening hours, open almost every day of the year. Access to the lake is free. This is a good visit option if you have some time just before flying from Larnaka international airport (five minute drive). We spent around one hour at that place.