Fuzina Hills in Bohinj is part of the Tentative list of Slovenia in order to qualify for inclusion in the World Heritage List.

The Fuzina Hills in Bohinj form a cultural landscape that was created for pasture cattle-raising. It comprises Alpine pastures and two settlements. In summer the herdsmen moved higher up the mountains with their cattle and lived in wooden buildings.

Map of Fuzina Hills in Bohinj 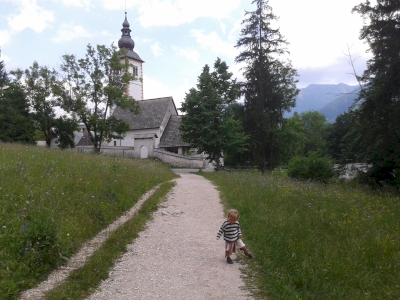 I visited the area around Bohinj Lake two times already. First, we did rather quick trip from the Savica waterfall uphill to the Black Lake and the mountainous plateau around Triglav, so, I could see almost nothing from the landscape proposed as TWHS. The next visit, I had enough time to explore the countryside of Stara Fuzina Hills. We spent a couple of days in the place around a stable of our friend close to Stara Fuzina village. Unfortunately, it is banned to overnight in tents in the area of Triglav National Park even on the private land and inside/close to the private buildings. The neighbors of the friend were extremely unfriendly (we met this attitude several times in Slovenia), thus, we had to escape much earlier than originally planned.

The area of large meadows, the landscape of Triglav NP, and the picturesque lake of Bohinj is really worthy to visit. I admired the ancient wooden hayracks and haylofts mentioned in the proposal, they are a work of real masters (unfortunately, I cannot find any photo), and enjoyed the unspoiled Julian Alps. Despite this, I am not sure if Fuzina Hills have any OUV. The use of a landscape for agriculture is very common all over the world, and I did not find this area including its wooden hayracks as unique.

PHOTO – the church of St John in Stara Fuzina close to Bohinj Lake (+ kid of my friends).

The Fuzina Hills are an Alpine meadow landscape, located in the Julian Alps near Lake Bohinj. Its description isn't telling us much on why this should become a WHS, but "pasture cattle-raising" stands out. The sites includes two villages (Studor and Stara Fuzina), plus various meadows and pastures at different heights.

Lake Bohinj is a very touristy area (it is also not far from the tourist trap Lake Bled), and this spills out to the nearby farmers village of Stara Fuzina. This village is worth a quick stop to look around and search for the traditional standing hayracks (common) and painted beehive panels. Just as many other villages in this region, it looks very Austrian with the snowcovered Alps in the background, the meadows in the valleys and the huge local church. Will this ever become a WHS? I don't think so.