Smahan's Mountain Nature Reserve is part of the Tentative list of Oman in order to qualify for inclusion in the World Heritage List.

Smahan's Mountain Nature Reserve in the Dhofar mountains is one of the last refuges for wild Arabian leopards. Furthermore it is the habitat of the endangered Nubian Ibex and Dhofar White-toothed Shrew. The steep limestone mountains have deep gorges and cliffs. 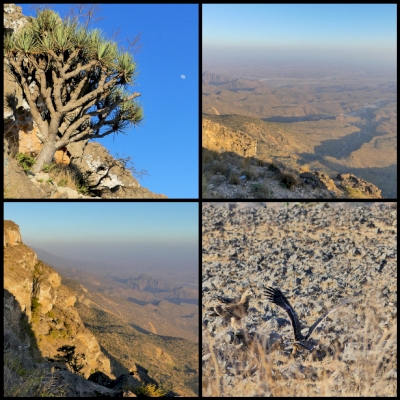 I visited this tentative WHS in December 2020 as a day trip from Salalah. To reach Jabal Samhan Mountain Nature Reserve, as it's known locally, I drove up the never-ending series of hairpins of Wadi Hanna just above the peculiar Anti-Gravity Point and dotted with the fine cluster of baobabs which make for interesting stopovers before reaching the signposted Jabal Samhan nature reserve proper.

Before reaching the highest panoramic viewpoint at 2100 metres, allow some time to acclimatise and perhaps be able to spot some of the countless birds of prey camouflaged on the greyish rocks instead of perched on the endemic Dhofar flora. Upon reaching the panoramic viewpoint over the many plateaus and gorges below, some of which are about 1000 metres deep, and which are home to several predators such as caracals, striped hyenas, Arabian wolves and which are one the last refuges for wild Arabian leopards. It really is quite incredible that such a practically uninhabited and undisturbed area exists so close to a desert region. All these predators prey on Arabian gazelles, Nubian ibex, Cape hares, rock hyrax, Indian crested porcupines, desert hedgehogs and several bird species. Just after the area with railings, there is a narrow and dangerous trail to reach the very peak but the view is pretty much the same you'll have without potentially risking your life. An alternative uphill route, which is probably much safer but involves scrambling up and down jagged rocks, can be found just behind the tiny but exquisite Cloud Coffee van, where I'd recommend to try out a warm fatira (like a crepe) with cream cheese and honey and some karak tea. Don't forget to bring a windjacket as it is always cooler than Salalah here.

The only predators you'll likely spot from this high vantage point are birds of prey as the other rare fauna tends to stay quite far away from humans, which is a good thing judging from some of the photos recently taken by camera traps (https://www.researchgate.net/figure/Leopard-pair-camera-trapped-in-Jabal-Samhan-Nature-Reserve-Photo-A-Spalton_fig9_277011088). Limestone quarrying and frankincense harvesting have seen numbers plummet but monitoring efforts using camera traps have shown that numbers are slowly rising again. Apparently, you can also prearrange a free trek with the owner of the camera traps, Khalid Al Hakmani who works with the Office for Conservation of the Environment (kmdhikmani@hotmail.com), a few weeks in advance of your trip. There's no cost, but you'll need to bring your own food. Still you'll most probably not see one of the 22 Arabian leopards (out of around the 250 still existing worldwide) which are believed to roam freely in Jabal Samhan, but at least you might be able to see some photos or footage first hand as well as a closer look at their habitat.

The Jabal Samhan viewpoint is mostly famous with locals because it is frequently foggy or cloudy below it which would make it even harder to get a glimpse of the almost pristine nature reserve. I endure my fair share of clouds almost all year round in Luxembourg so I was glad to visit on a clear day, which was great also for some worthwhile birdwatching, Arabian chameleon hunting and gazing at unique flora similar to that of Socotra, Yemen. The Dhofar region in southern Oman certainly has potential to offer future natural WHS and this could easily be one of them.