Sacred Sites associated with Phajo Drugom Zhigpo and his descendants

Sacred Sites associated with Phajo Drugom Zhigpo and his descendants is part of the Tentative list of Bhutan in order to qualify for inclusion in the World Heritage List.

The Sacred Sites associated with Phajo Drugom Zhigpo comprises 16 fortresses, temples, caves and cliffs that play a role in the Drukpa-Kagyud Buddhist tradition. The most iconic of those is Taktshang a.k.a. Tiger’s Nest. The sites are of great historical and spiritual significance for the Bhutanese as they show one Buddhist school’s lineage since the Middle Ages. 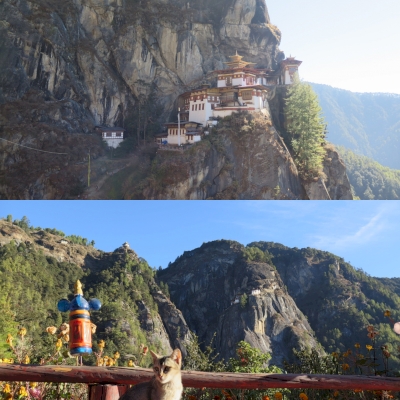 No visit to Bhutan is complete without the Tiger's Nest, officially called Taktshang but trust me no-one will remember THAT name if you have already familiarized you with the B-movie Jason Stratham movie title soon coming to a streaming service everywhere. Conveniently placed near Paro, and I saw it from the plane heading to Paro Airport already, this is surprisingly "only" a half-day trip. Getting up early helps to avoid the mid-day heat even in November plus the horse rides that are popular with Indian tourists. The ascent takes roughly 3h with a tea break at the only guest house on the way to the top, providing your first real opportunity at photos. The sun is unfortunately rising beyond the temples and the sun glares right into the camera. The sandy path is not easy. Another hour and you can reach the steps, more viewpoints, then you are in the shade and it is suddenly cold.

When you reach the temples, Tiger's Nest is actually just ONE of the seven here, you have to drop off your camera and phone, shoes are only allowed for the central areas but not inside the actual temples. It was surprisingly empty inside. The Tiger's Nest, as mentioned, is actually a cave temple and the guide did not take me inside. It doesn't seem the highlight of the complex and involves more the story of transforming into a tiger and this lair is nothing to look at from the inside, but honestly none of the temples seem like anything unique on their own. The iconic placement on the mountainside is surely what brings people here and I am one of them to enjoy it. In total we spent 20 minutes at the temple and this is around average time.

The descend is a bit of a drag because you have to avoid all the slow tourists coming up, you don't get the same breathtaking views in front of you, the sand really makes it difficult to get a foothold sometimes, you think about the delicious lunch awaiting for you at the restaurant soon :)

The UNESCO introduction for this esoterically named T List site, lists 16 locations – with No 3 described simply as “Taktshang”. Nothing else is stated about it but, “hidden” here, is Bhutan’s most iconic site – The Tiger’s Lair Monastery!

It would seem unlikely that anyone would visit Bhutan and not see it. Our first view was out of the left hand window of our Drukair flight from Kathmandu to Paro back in autumn 2001. The flight along the main Himalayan cordillera and then down into Bhutan’s only international airport is an “experience” and the final descent runs alongside the mountain face into which this monastery is built. You may not actually be quite at “window level” but it is still a great view!

To actually reach the monastery requires a climb of a couple of hours up a well worn track which starts a few kms outside the town of Paro. The monastery had suffered a major fire in April 1998 and wasn’t open when we were there – but it did seem to have already received a significant amount of rebuilding, at least to the exterior and no result of the fire was visible to us from the outside. A good view of it is available at the summit of the climb which is actually a bit higher than the monastery across a gorge. The track then takes a downward direction and later crosses the gorge to climb again to the Monastery – about as far again as from the car park to the viewpoint. I note from recent Tripadvisor and other reviews that, even in Bhutan, time doesn’t stand still and that a “cafeteria” now exists at the summit! I also understand that the monastery IS now open but (as is normal in Bhutan in religious buildings) “no cameras allowed”.

So - what of the monastery’s relevance to the complex registered title of this T List site? The UNESCO description refers to “the key twelve sites of Phajo Drugom Zhigpo; four Dzongs (fortress), four Drags (cliff) and four Phugs (caves)” together with another “five sites (which) had been the regional centers of the five clans of Phajo Drugom Zhigpo's descendants” – this seems to make 17 locations, rather than the 16 listed, but never mind! Taktshang is included but it is not entirely clear to me whether this monastery is also considered one of the 4 Dzongs – only 2 of the locations are specifically so identified in the UNESCO introduction. Phajo Drugom Zhigpo was a Tibetan who came to Bhutan around the early 13th Century and was significant in the spread of the Drukpa school of Buddhism to the country – followed to this day by some 70% of the population and Bhutan’s “state” religion (within a legal “framework” of freedom of belief though not of proselytisation) - the only country in the World to have the Tantric form so recognised. Some “homework” on mystical Buddhism might be in order before any trip to Bhutan!!

Apparently Phajo first meditated at Taktshang for a month, having been led there by a “visionary instruction by Guru Rinpoche, the great Buddhist saint in the 8th century who is considered as the second Buddha” (UNESCO), and was told by his guru to visit the other sites to “fulfill his wish to salvage sentient beings from sufferings through teaching of Drukpa Kagyud” (UNESCO). His influence subsequently spread across the area both religiously and politically. He had 2 wives - 1 son from the first and 7 from the second (of whom 3 died in a “magical” incident - “One day, Phajo took all seven sons to a bridge and, invoking the deities to decide which of his sons were demons and which would preserve his lineage, he threw all of them into the river. Three sons drowned and four remained unharmed.”!! Wiki). It is said that “Many of the more important noble clans of Bhutan could claim descent from his sons.” - hence, presumably, the inclusion of Phajo’s “descendents” and locations related to them, in the title ! The site obviously has significant national and political resonance for Bhutanese and, potentially, “spreads” the benefits of an inscription across a wider geographical area.

So, Taktshang itself pre-dated the arrival Phajo as a religious site – it is situated in front of a cave which is associated with mythical religious personages flying there on the backs of, or transforming themselves into, tigers – hence its name which originates as “Tiger’s lair”. Various gurus meditated there long before Phajo – one of whom (“Milarepa”) I have actually previously heard of in a Tibetan context! Interestingly, Phajo isn’t mentioned, by Wiki at least, among the famous/significant holy men who stayed there. And he only stayed for a month – unlike, for instance “Padmasambhava the Lotus-Born, who stopped at this “Tiger’s Lair” in the rock, climbed down into the natural-formed cave where he meditated for 3 years, 3 months, 3 weeks, 3 days, and 3 hours…..He did this without drinking any water or eating any food”!

Presumably, Bhutan must consider it a “better” strategy to develop a nomination based around the historical character of Phajo and, with it, the wider religious tradition of Bhutan, by linking together a number of other sites, rather than going with Taktshang as a single historic monastery in an “iconic” location. One suspects that it is less to strengthen the case for the Tiger’s Lair than to enable a number of other sites to ride on its back. The main building we see today (leaving aside issues of reconstruction following previous fires) dates from c1692. Bhutan has a “bit of a problem” in that its main potential cultural WHS contribution relies heavily on “dzongs” and monasteries so it needs to do something to differentiate them! On the other hand, nominations which rely significantly on association with a historical individual tend, as we know, not to be looked upon kindly by the WH system. As far as I am aware we didn’t visit any of the other 15 locations currently included so I can’t personally assess what their OUV might be – and, whether this is relevant or not, they do not figure “large” on the Web or in LP. One dzong at Tango, a few kms N of Thimpu, is described but doesn’t seem to be anything particularly “special” in the dzong department and we didn’t visit it among “all” the other things to do in Thimpu!

Whatever – it would seem inconceivable that Taktshang itself should not, one day, be added to the List, either in its own right or as part of some wider inscription.