Chatham Dockyard and its Defences

Chatham Dockyard and its Defences is part of the Tentative list of United Kingdom in order to qualify for inclusion in the World Heritage List.

Chatham Dockyard was one of the main naval bases of the British Royal Navy at the height of its imperial power. In the 18th century it was the primary base of the national fleet, however by the 19th century it had become the hub of ship production for one of the world’s most powerful navies. The dockyard is in Kent around 50km east of London and has been a museum since ship production stopped in 1984. This has protected the core of the 18th century dockyard and nearby coastal defences, meaning it is one of the best preserved naval dockyards from the age of wind powered sailing.

Map of Chatham Dockyard and its Defences 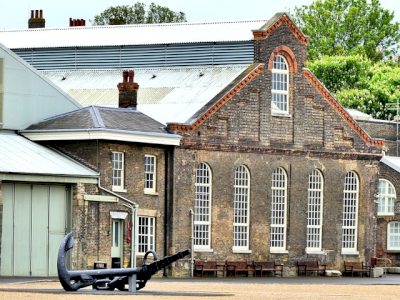 I visited this WHS in May 2019. It was a very convenient stopover from London en route to Canterbury. The entrance ticket is expensive but considering the Historic Dockyard's size and other industrial WHS already on the list it's quite reasonable. Parking is also included in the ticket and if you visit on a quiet morning like I did, most probably you'll be parking inside the 1848 No. 5 Covered Slip.

Even though I'm not an industrial heritage fan, I was pleasantly surprised with this tentative WHS. To a certain extent its OUV is justified and it might even fill in some maritime heritage gaps if inscribed. It is at least as deserving as the other industrial WHS in the UK. All the fortifications built to defend this strategic dockyard are included and can be easily viewed for free if you're travelling by car. The best examples are Fort Amherst and Upnor Castle even though all in all the Lower Lines and Great Lines Heritage Parks are a bit neglected.

The Historic Dock information video at the visitor centre gives a very good overview of how the bygone age of sails, industrialisation, the new iron age, steam power, underwater warfare are all represented in one ensemble of over a hundred buildings and structures, some of which are Scheduled Ancient Monuments. The dockyard is run on the principle of preservation through reuse. Some of the buildings are open to visitors, while others are occupied by residential tenants, businesses and faculties of the University of Kent.

The buildings, places and 'monuments' I enjoyed most were definitely the interesting Victorian ropery, HM Submarine Ocelot, HMS Cavalier, HMS Gannet, the lifeboats and the contrast between restored wooden administrative buildings and mast houses, and the red brick smithery, commissioner's house and main gate (full of old graffiti!).

I went to Chatham Dockyard (and the nearby city of Rochester) in June 2016. As Nan Mungard says, it's shockingly expensive, at £24! I had a National Art Pass, however, which allows free access.

The site is large and was very undervisited for a Saturday in June (hint to management: it might have something to do with the price). We enjoyed the submarine tour but the rest of the museum site verged on the dull. Huge buildings full of vehicles and model ships. A modern art gallery, some of which's works give the Saatchi Gallery a run for its money in terms of absurdity.

To be fair though I must withhold full judgement because I didn't go in the exciting-sounding "rope making experience" as several buildings closed an hour before the overall dockyard's closing time. 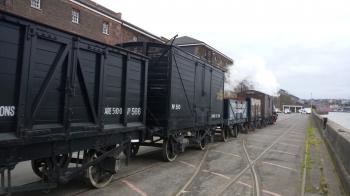 We did Chatham on a day trip from London. It was terrible spring weather (cold, wet, windy), so our general inclination was not to stay long. Surprisingly, we ended up staying for hours; there was a lot to see and enjoy.

The shipyard itself is quite a site when you pull in. Large halls from the 19th century greet you. The site shows you how ships were built in the British empire and how these ships looked over time. There are even a few steam trains running to show how they transported goods. Quite impressive. And very enjoyable for kids who fancy "tuc tuc" trains, one of them travelling with us ;)

Included in the site are also fortifications. Given we already ran out of time visiting the shipyard we skipped on these.

Looking at the shipyard connection, it seems rather probable that the site will be added. It doesn't look as if industrial shipyards from the 19th century are present at all on the WHS list. And this is a shipyard of the prime naval power at the time. I think they should remove some clutter from the site, e.g. a parking space in a key site structure, but otherwise this should be fine.

We went by car. It was a 1.5h ride. On the site you can move by foot. Not sure how you would get there by public transport, but it should be possible.

You can visit a submarine and a rope maker. However, these require a reservation and that may require waiting for hours. We actually missed ours as we were exploring one of the museum boats.

Things not to do

This is really expensive, even for English standards. I think we had to buy a annual pass for 20 GBP.