El Ferrol of the Illustration Historical Heritage is part of the Tentative list of Spain in order to qualify for inclusion in the World Heritage List.

El Ferrol is a port city on the Atlantic coast of Galicia, located at the estuary of the river Xuvia. Ferrol was an important naval base and shipyard for most of its history. The historic ensemble represents an ideal port city of the 18th century and includes the natural harbour, the fortified city, the civil and military arsenal, and defences along the coast.

Map of El Ferrol of the Illustration Historical Heritage 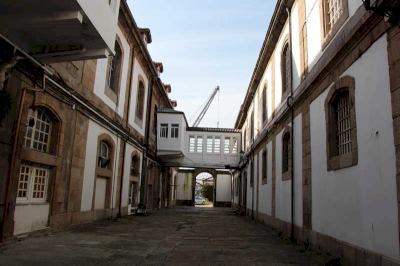 Ferrol was once the most important Arsenal in Europe. Since the 17th century, it is the capital of the northern branch of the Spanish Navy. There is no defence structure within the town, only outside, at the narrowest part of the Riba (San Felipe and Palma). The main feature is clearly the harbour with its barracks. Unfortunately, it is still an active Army zone and entry is not possible. The only buildings that are accessible and within the harbour are the Naval Museum and the Ship Construction Museum.

There is also a small park called Jardines de San Francisco from where you have a nice view over the military zone and will be able to spot some battle ships. Other than that, you are left with a rather unappealing town with some Neoclassical buildings.

I must say I did not particularly enjoy my visit, even though the Naval museum was not bad. It would come as a great surprise to me should this become a WHS.