The Murge of Altamura

The Murge of Altamura is part of the Tentative list of Italy in order to qualify for inclusion in the World Heritage List.

The Murge of Altamura is an area marked by karstic phenomena, which has given rise to caves, swallow holes and dolines. In particular, the Pulo di Altamura is the largest doline in the region, measuring about 500m across. Additionally, the De Lucia quarry contains thousands of dinosaur footprints, dating back to about 70 million years ago, and at the Lamalunga cave a complete skeleton of a man from the end of mid-Pleistocene was discovered.

Map of The Murge of Altamura 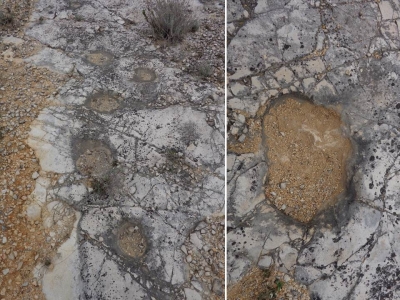 I read the recent (and so far only) review of this TWHS and noticed our own experience of this place was exactly complementary to what was reported, so I would like to share a few words on that.

In April 2017 on our way from Bari to Matera, we made a stop in Altamura. As it was already reported, three places may be considered for “visiting” this TWHS. First the “pulo” which is a geological formation typical of karstic areas: world heritage list in already full of karstic formations, caves etc (see also the “dolines” in French WHS “Causses et Cevennes”, very similar to “pulo”). Second, Lamalunga cave, where the skeleton of a prehistoric man was found; however Unesco website indicates it cannot be visited. Only the third location was left and this is the one we decided to focus on: a former quarry with dinosaur footprints, named “de Lucia quarry”, better known locally as “cava Pontrelli”.

Coming from Altamura on road SP235, you shall turn left on a very small road just before passing the quarry, cross the railway, then immediately park on the right side of the road. There is a closed gate, but the quarry is partly fenced and it is wide open on the left side of the gate. This is the way we used to get in, as many visitors had already reported on other websites for travellers. The path gently goes down the excavated area and after ca 200 m, you reach the grey layer where dinosaurs footprints can be observed.

There are hundreds of footprints, of different sizes, unfortunately some covered by gravels or dust, directly exposed to rain, wind … and visitors. There is absolutely no information on site. The place is safe as long as you keep away from the walls of the quarry (and no need to do so to enjoy the footprints). We were very impressed, much more than when we had visited some sites of “Icnitos de dinosaurios”, formerly on Portugal and Spain tentative lists. I believe the connection between the three elements of this TWHS (“pulo”, prehistoric skeleton, footprints) is not so obvious (it seems more that they are grouped because geographically close to each other), however this component alone is promising. Back at home and looking for more information on this place, I happened to understand that it took long time to get the works stopped in the quarry (private), then to get the land in hands of local authorities, and that they are still looking for funds and agreements to have the site made “visitors friendly”, so no one can really predict when this may happen. 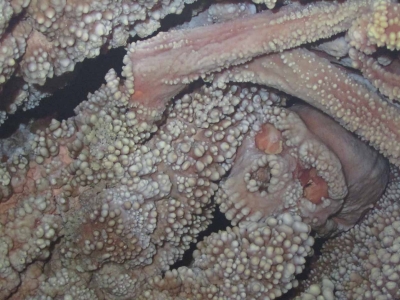 I arrived in Altamura (which seems to mean High Wall) at about 14:30 on a Monday by bus from Gioia del Colle, as I was coming from Taranto, but Altamura can easily be visited from Bari TWHS or Matera WHS by train, as it is located on the rail line between these 2 cities.

First, even though I only became aware of Altamura because of its TWHS status, the walled old town was quite pleasant with a marvelous cathedral, museums, and many cafes / restaurants populated by who appeared to be Italian tourists.

There are 3 museums related to this TWHS in the Altamura area.  I believe most museums in Italy are closed on Monday, but the main one of the 3, the Altamura National Archaeological Museum (ANAM), was open on this Monday, so that's where I headed after checking into my hotel.

To state what I found out at the ANAM first, there are basically 3 main sites related to this TWHS.  The primal site, so called "Pulo of Altamura," is what is supposed to represent the landscape of the region "Murge" with many sinkholes and is located at 40°53'22.0"N 16°34'05.2"E  The Pulo can be visited on your own, but it is just one of the large sinkholes in the region.  Then, as the nomination document says, "In addition to these landscape features, the Altamura area includes items of outstanding cultural and archaeological interest as shown by two locations: the De Lucia quarry and the Lamalunga cave. "

The De Lucia Quarry, located about 6 km south-east from the center of Altamura, is where Dinosaur footprints have been found in the world's greatest numbers, or so they say.  But I was told at the ANAM that this place was not possible to be visited at this time. I learned later that it is not to be visited because nobody is looking after the site, which is hard to believe.

But the blockbuster attraction of this TWHS is supposed to be the Lamulunga Cave where the oldest skeleton ever of a Neanderthal man, so called Altamura Man, was found in 1993.  Another one of the 3 museums, The Lamalunga Visitor Center (LVC), is located near the Cave and is about 4 km north of the center of Altamura, so that's where I was planning to visit in the following morning.

But at the ANAM, I found out that the cave was also not possible to be visited.  At the ANAM you watch a video, in which you see a professional caver going into the cave from an entrance that is about 50 cm in diameter. LVC supposedly focuses on how the cave was discovered, not on the cave itself, and offers a tour only up to the entrance of the Cave,  as well as to the Pulo, if you make an arrangement in advance as a group.

It was raining in the following morning, and I said, "Well, what's the point?" and decided not to walk for 4 km to LVC.

Instead, I decided to visit the last of the 3 museums, Palazzo Baldassarre, near ANAM on Tuesday morning and, to my surprise, it was this museum that focuses on the Cave and the Altamura Man himself. Indeed, the museum had a replica of the Lamulunga Cave!  The Altamura Man is deeply rooted in the Cave, and they have decided not to remove his skeleton from the Cave, as doing so would jeopardize the prized finding itself. So there was also a replica of the Man within the replica of the Cave.

This means, after all, that I visited 2 museums but did not visit any of the 3 main sites.  However, if you count the Lascaux Cave in France as "visited" just by visiting the replica, then I can count the Lamulunga Cave as visited!