Cathédrale de Saint-Denis is part of the Tentative list of France in order to qualify for inclusion in the World Heritage List.

Saint-Denis Cathedral is considered a major work in the development of Gothic style. In the choir of Saint-Denis, the typical elements - ribbed vaults, pointed arches and high pillars - were combined for the first time. The cathedral was also the burial place of almost all French kings and queens from the 10th century until the French Revolution. Saint-Denis is one of the largest collections of funerary sculpture in the world. 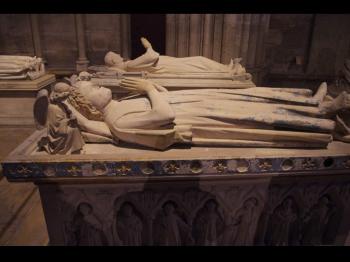 The basilica of Saint Denis, in the immediate suburbs of Paris, is a masterpiece of religious architecture and has been an artistic achievement and model throughout the centuries. The place has been the resting place of numerous French monarchs, as exemplified by its numerous sculpted tombs.

I agree with the other reviewer. St Denis should be given world heritage status because of its influence on the architecture of western Europe. While not as imposing as Chartres or Notre Dame de Paris, it is elegant and well worth the effort to get there.

what can I say about this site? Well to start that in my eyes it totally deserves world heritage status. It is another cathedral but a very beautifull one. It's also one of the earliest (perhaps the first?) gothic church in the world. I walked in on a very sunny day and the stained windows light up beautifully.

What makes this cathedral truelly special however are the funerary monuments of the french kings. I've never seen such a big collection of royal funerary monuments put together. What I understand from Saint Denis history is that all the french kings from the 6th century were buried here (also Jeanne D'arc achieved sainthood here). During the revolution the graves got destroyed (except some saved for la gloire de la france) and all the royal skeletons were thrown in one big pit. They never managed to sort them out so all the bones remain as a mish mash in the pit. Which is supposed to be highlighted by name plates. I think I saw these plates in the crypt but I'm not certain.

Amongst the funerary monuments are those from Marie-Antoinette and Clovis I (king of the franks). Also an interesting sight is the preserved heart of the boy who would have become King Louis XVII if it weren't for the revolution. Apparently they wanted to throw his body in a mass grave, but a doctor cut out his heart and preserved it, it was found in 1978 and positively identified with DNA and placed in saint denis in 2004.

All in all I can highly recommend a visit to this place. It's quite easily to reach from Paris with the metro (you need to have a 3-zones card). Though it does take about a half hour cause the cathedral is a bit out of the city center.