Alexandria, ancient remains and the new library is part of the Tentative list of Egypt in order to qualify for inclusion in the World Heritage List.

Alexandria, founded in 331 BC, was an important centre of Hellenistic civilization and remained the capital of Ptolemaic Egypt and Roman and Byzantine Egypt. Very little of the ancient city has survived into the present day, however "Pompey's Pillar", a Roman triumphal column, is still standing. The modern Bibliotheca Alexandrina (2002) is based on reviving the ancient Library of Alexandria, which was one of the largest and most significant libraries of the ancient world. 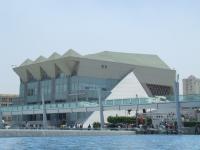 Alexandria's long and colourful history is what makes it such an interesting and diverse city. The remains from the Greco-Roman era are quite evident in the underground necropolises, the Roman theatre and nearby excavations, and artifacts brought from beneath the harbour also on display. The plan of the city was changed radically by an earthquake which toppled the Pharos lighthouse and submerged much of the city creating the harbour. The Ottomans used the stone from the lighthouse to build much of the Qait Bey citadel. Modern architecture is represented by the palaces built for King Farouk in the Montazah Gardens and the ultra-modern library complex completed in 2002.