Arsenal de Rochefort et fortifications de l'estuaire de la Charente is part of the Tentative list of France in order to qualify for inclusion in the World Heritage List.

The Arsenal de Rochefort at the Atlantic coast was a military base and dockyard built in the 17th century to secure France's role as a sea power and to protect the trade routes to the colonies. Between its opening in 1666 and its closure in 1927 more than 500 warships were built here. The former Royal Rope Factory (‘Corderie Royale’) is the largest and most important building of the Arsenal, with a length of 374 metres. The Arsenal is located on the Charonne, about 25 kilometres from the sea. Along the course of the river and on islands in the estuary there are forts and defences that date from the same period. 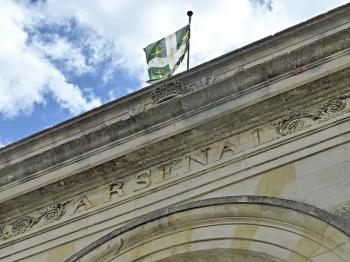 I visited this tentative WHS in July 2016. I visited by car from La Rochelle and stopped for a couple of hours before heading towards Royan. The main sight is the Arsenal Archway together with the maritime buildings as well as and the nearby Maritime Museum however most tourists visit Rochefort to see Hermione in the docks, a beautifully reconstructed replica of the 1779 Concorde class 12-pounder frigate. I enjoyed my visit although I think there are already too many inscribed maritime/naval WHS and this site wouldn't add anything new.