Church of Santa Prisca and its Surroundings

Church of Santa Prisca and its Surroundings is part of the Tentative list of Mexico in order to qualify for inclusion in the World Heritage List.

Map of Church of Santa Prisca and its Surroundings 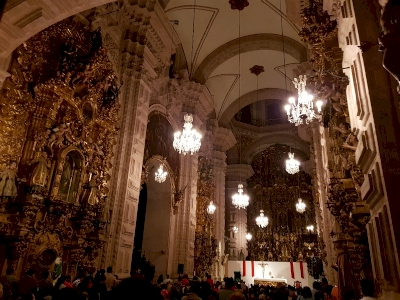 This church is treated as one of the most important examples of Mexican baroque art. It is situated on top of the hill in the center of Taxco de Allarcon and its towers are visible from really long distance. The church itself is very nice. The ceiling is plain white but what makes it special are wooden crafted altars that are really masterpieces of art.

Does it deserve WH status? Well, I doubt it, Mexico has numerous examples of great baroque churches, many of them inscribed under “Historic center of ...”.

Does the church itself deserve a detour? I would hesitate to say yes unless you are very close (e.g. go from Mexico City to Acapulco).

But is it worth to go there? YES, definitely! Not exactly because of the church but because of lovely town of Taxco de Allarcon. This town is really picturesque, situated on the layer of the mountain, with lake below. On the way to Mexico City there are several viewing points where you can admire its full panorama, which is particularly appealing at night. Unlike all inscribed historic centers in Mexico, that are full of colors, Taxco de Allarcon is entirely white. Entire town is really hilly and it is quite difficult to walk but you can always take a taxi (and all taxies in Taxco are stylish white Volksvagen Beetles). Most of the buildings are renovated and the town looks wonderful, especially after dark. I have visited all inscribed historic centers in Mexico and Taxco appeared to me as superior to all of them.

Although not as big as Santiago de Compostela's church, Sant Prisca is a beautiful church that well deserves to be declared a WHS. Not only is the façade of the church amazing, but also its gold covered insides. I've never seen so much detail and gold in one single church, and let me tell you, I've visited quite a few churches in Europe. I guess the amount of gold has to do with the fact that Taxco was and still is a mining town. Anyways, all the inside walls are covered with gold frames, which is quite amazing. The outsides require a little bit of maintenance, particularly the sides of the church, but I truly recommend a visit. I guess the best part of it is seeing the church as part of the really outstanding urban landscape that is the mining city of Taxco. The city was erected in the middle of a really hazardous mountain range. The valley, covered with white traditional houses, and the church in the center of it all, is quite a view. Taxco is a must if you're in Mexico City, as it's only 3 hours away.

Unesco Website: Church of Santa Prisca and its Surroundings

Church of Santa Prisca and its Surroundings (T)