Konya-A capital of Seljuk Civilization is part of the Tentative list of Turkey in order to qualify for inclusion in the World Heritage List. 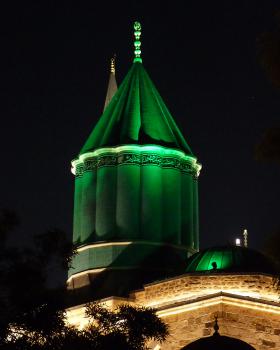 The introduction to this entry on the UNESCO web site is enigmatically thin:- “The outer fortress of Konya and the Alaeddin Mosque, the Sirçali Madrasa, many small mosques and tombs are examples of Seljukian architectural elements of Konya.” This leaves the big question as to whether the Mevlana Museum, the home of the Whirling Dervishes, is to be included – it just doesn’t seem possible that this famous icon of Konya and indeed Turkey could be ignored . In which case why isn’t it mentioned?

Mediaeval Turkish history is unlikely to be a subject about which many of us are expert but a trip through Anatolia looking at the large number particularly of Seljuk Tentative List sites creates a dim understanding! It was the Seljuks who were the most significant of the original Muslim groups who entered the Byzantine Anatolian Empire from the East and set in motion the gradual expansion by force of arms of Turkic rule across the whole peninsular from around 1071 until eventually, another such group, the Ottomans, finally overcame Constantinople in 1453, thus completing the replacement of the Greek speaking Christian remains of the Roman empire with a Turkish Muslim one. The Seljuks were a Turkic dynasty which had emerged from the lands between the Aral and Caspian Seas, establishing themselves first in Persia, from where they expanded East and West. Their control over Anatolia never extended completely to the east of the peninsular (They did for a short time reach Iznik – another of Turkey’s T List sites) and they ultimately broke up into smaller emirates, finally disappearing as a separate group around 1300. Their major political entity during this period is known as the “Sultanate of Rum” (Arabic for “Roman” because their empire had been established on “Roman” i.e Byzantine, lands). The longest serving capital of this Sultanate was situated in Konya (formerly the Byzantine city of Iconium) which they had conquered in 1084 (though they lost it a couple of times to Crusaders and Mongols over the next century). It ceased in the role with the final Seljuk demise in 1307.

Today Konya is a city of just over 1 million with a buoyant economy, a shiny new tram system still under construction and a recently opened high speed railway to Ankara. Despite these it has a reputation for social conservatism and religious devotion. There are a lot of modern buildings and the city doesn’t really have a preserved “mediaeval” centre. Instead, such structures as remain from the Seljuk era are scattered around the town and take some looking out. Seljuk architecture demonstrates a number of common attributes – see http://en.wikipedia.org/wiki/Seljuk_architecture and one gradually begins to “recognize” such structures. Konya has examples of mosques, minarets, a palace, Tombs (or Turbes) and lots of Medresses (Apparently there are a lot of Seljuk versions of these since the Sultans saw their establishment as a way of combating the growth of Shiism) The City’s focal point is the Alaeddin mosque situated within a circular park. Originally a Christian Basilica, it became the dynastic mausoleum of the Seljuk sultans with “Turbes” for them. Next to it is a single wall of part of the former palace, now rather incongruously covered by a modern (and crumbling!) parabolic concrete shelter. We looked around the town at a few Madresses – most of which had been converted to museums e.g of Carving and of “Funerary Monuments”). My “bible” on Islamic art and Architecture (ISBN 3-8290-2558-0) published by Konemann gives Konya’s Seljuk architecture its own section and I don’t doubt its significance but as a non-initiate I wasn’t able to get too excited. As we often found to be the case with Seljuk architecture, the best “bit” for us was the façade to the main entrance with its fine stone decoration so we gave up going in after a few buildings!

But that takes us to Konya’s most famous building with its fluted dome of turquoise tiles – now called “Mevlana Muzesi” but originally constructed in 1274 as the Mausoleum of Rumi, the Persian language (although born within current day Afghanistan) mystic poet who made his home in Konya from 1228-1273. It was there that he wrote his works and developed his philosophy. It is perhaps a measure of our Euro-centricity that very few of us from “the West” (and I make no claim to be on that list!!) will be able to say anything much about this man whose writings are compared with Shakespeare and Dante but whose followers also founded a religious order based on his teachings - The Mevelevi, better known in the West as “The Whirling Dervishes”.

So, the heart of the building constructed in 1274 is undoubtedly and flamboyantly “Seljuk”. The complex has however undergone many developments with additions up to 1854 - I have been unable to establish the exact percentages of Seljuk v Non Seljuk structure but one just can’t believe that it would not justify inscription under this title and OUV. The previous reviewer refers to the fact that the “Whirling Dervish Ceremony” (or the “Sema” to give it its correct name) can be seen in Konya during a festival in December. In fact things have moved on since his visit in 1988 and the ceremony can now be seen there every Saturday evening. I should add that it is presented there in its full and correct form in 4 parts lasting around 90 minutes and today even concludes with a prayer and is aimed primarily at Turks if the audience when we saw it in May 2015 was anything to go by – unlike the “tourist” versions available at restaurants etc in e.g Istanbul which offer a tourist version (Though I understand that the Mevlana Tekke in Istanbul near Galata does offer the “real thing”)

Given its potential relevance to any possible nomination of Seljuk architecture in Konya it might be worth reviewing the recent history of the Mevlevi Sect in Turkey. Following the establishment of the Turkish Republic under Ataturk the sect was outlawed in 1925. At this point the Rumi Mausoleum became simply a “Museum”. Since then the Order, which has kept going somewhat unofficially but, one suspects, with strong traditional popular support, has gradually clawed its way back into governmental acceptance by adopting a strictly non political stance – and more recently perhaps because the AK party under Erdogan is more willing to accept some degree of “Islamism” within society despite Turkey’s avowedly “secular constitution. Whatever – in Dec 1953 “the first authorized whirling since 1925 took place in a cinema with only three musicians. The two participating Sheikhs wore street clothes. Subsequent years saw the gradual expansion of the ceremony, as it first moved into a library, and finally a large gymnasium. Intense scrutiny from the police was always present. If any of the Semazens were discovered by the authorities to be praying, they risked being punished with lengthy prison sentences”. In 1964 UNESCO was involved in bringing some Mevlevis to Paris and the Konya performance developed into an Annual “Festival” – still taking place in a gymnasium. This link provides details of some of the stages leading to the current situation whereby the Sema is performed regularly in both Konya (and Istanbul) – nowadays in an enormous purpose built arena, and in 2005 was inscribed on the UNESCO list of “Masterpieces of the Oral and Intangible Heritage of Humanity” .

So, its position today, lying somewhere between an expression of genuine religiosity and a “cultural show”, remains somewhat ambiguous – and probably deliberately so. Our visit to the “Mevlana Museum” certainly seemed like a visit to a religious shrine. The locals washed themselves before entry as if to a mosque, shoes were of course forbidden and their devotion towards the tomb of Rumi was palpable. In the surrounding buildings of the complex, the “Museum” aspect was still present with models of Dervishes receiving their training and rooms of Mevlevi artifacts such as hats and cloaks. The original dancing floor or “Semahane” in the room next to the mausoleum also had more artifacts on display.

But we had no idea where or in what form we were going to see the dancing – merely that it would take place in the “Mevlana Cultural Centre” somewhere “behind” the Museum. This in fact turned out to be an enormous modern (2004?) structure with both an indoor and outdoor circular auditorium – the indoor version seats c3000 people. Clearly the Mevlana aren’t short of a Turkish Lira or 2! And I have read “But it's not big enough. In 2013 plans were drawn for a hall four times as large (10,000 seats) to accommodate the throngs who crowd into Konya for the annual Şeb-i Aruz, the annual commemoration of Rumî's "wedding night with God" (his death)” The Saturday performance (free entry) starts at around 7.30 – if you can arrange to be in Konya on that day you should definitely do so!