Group of Monuments at Mandu, Madhya Pradesh is part of the Tentative list of India in order to qualify for inclusion in the World Heritage List.

Map of Group of Monuments at Mandu, Madhya Pradesh 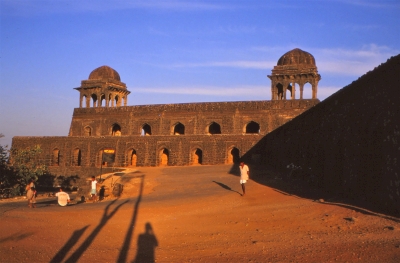 Visited this ghost city during a trip in December 1989. Nobody seemed to take care of the place back then. The area was open, and no fees needed to be paid. Our group spent the night in the open air under a full moon (if I remember correctly) on top of the pavillion and we woke up with a beautiful sunrise. Arriving in the evening and leaving early morning means that it was dark most of the time we were there. It served as our campsite and we had not much time to explore the grounds, but still, it was a wonderful experience. 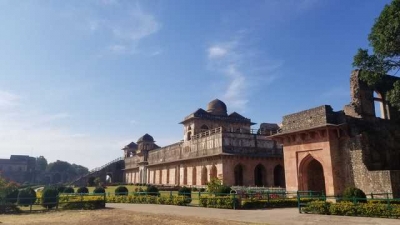 Mandu is one of the few sites lingering on the tentative list since 1998. I couldn't tell you if there is an internal problem or if this was attempted and got early bad feedback for any reason, but since it “survived” for so long I figured I should add it to my trip sandwiched between Bhopal's WHS and Western India, i.e. Ahmedabad.

Visiting all three parts actually costs more than any WHS in India which seem on a standard price (currently 600), so I find it a bit ridiculous that they can't offer a group ticket for this price but instead 300 x 3. Saying this, if one is not interested to spend 900 they should just focus on the group of monuments. This is the best and biggest part.

To get here you need transportation from Indore, 90 minutes away. More than half is a good highway, the last part can be frustrating and inside the Mandu fort area the road is often single lane. Many of the sites in the fort are off limit mainly due to lack of infrastructure to support visiting them although I saw locals climbing around on them.

First stop was the Jami Masjid and marbel Hoshang Shah’s Tomb. The mosque is not very special, the tomb is pretty neat. You can actually see the tomb from the side of the road so you could also skip this but I think it was okay for an introduction. There were no other guest here the 25min I spent exploring, and the bats made the tomb their home now with surprisingly little bat poo around.

Second was the Taveli Mahal as well as other palaces and mosques in one massive area. This is the meat of the fort. I spent 90 minutes exploring every nook and cranny of what is open to the public, and there is more you can't get to just across a fence. I also love her you can seemingly find a way to continue any way you can through doorways and steps that you don't follow a linear path. I generally dislike guides but here it might be worth it, but I overheard a guide from another group telling stories about Krishna, the Indian PM, India in general, plus a 1on1 guide ALWAYS asks me more questions than I do him so I refuse this service. Anyhow I think there is more WHS material here than many inscribed sites, what a shame this has so low priority to get on the list. Tourism would definitely pick up. Highlights I found were the water flow system that is shaped like vines, filling the baths below in style (obviously not in use anymore but in great condition), a cute lake that should maybe offer some tacky swan boats for the selfie crowd and the archways in the Hindola Mahal. There is also a very small museum to showcase some carved columns and porcelain pieces found area the area. I forgot to say that the northern section also has bats living inside. I heard them but wanted to enter the archway anyway only to be met with a swarm of bats flying by. Almost a Bruce Wayne moment there - just let me know if I need to get ready and be the next protector of Gotham!

The third stop was at the south which is the end of the fort for a reason: once you get up to the walls you will be greeted with a 400m drop into a huge valley that goes on until...you can't even see. That is unfortunately the highlight of this 300 rupee entry fee. The pavilion has a couple of towers that look nice but it is very unexceptional, they do take care of the small gardens nearby though. Many Hindu pilgrims showed up making me think this is maybe a special site. The nearby palace looks almost the same. I walked through quickly to avoid any more selfie requests.

So whereas nobody went to the marvel tomb, Western tourists where at the group, and locals flocked to the pavilion, I am still glad I saw all three. I left Indore at 07:00 and got to the airport by 12:30 well in time for my flight to Vadodara.