The Wine in Iberia

The Wine in Iberia is part of the Tentative list of Spain in order to qualify for inclusion in the World Heritage List.

Map of The Wine in Iberia 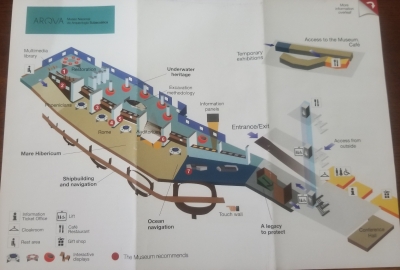 Not another wine region...please! Wait, it's not? From the title it sure would sound like the general wine of the Iberian peninsula would be up for another landscape inscription but when I saw several spots on the map for detailed locations I was already curious about what it is all about, and after reading the document submitted to the UNESCO website is clear that this is about the wine trade between Iberia and the rest of the world (mainly Phoenicians?) back in the days. One of the wrecks, the Mazarrón II, is actually in the sandy bay of the appropriately named Puerto de Mazarrón at the south coast of Spain. Whereas snorkeling out is possible the metal sheets covering it make it a non-started for seeing this currently tentative WHS.

I opted for the National Museum of Underwater Archaeology in Cartagena. Cartagena is already a semi-popular spot judging from the amount of museums and a small old town but I think it's main tourist drive comes from docking cruise ships. At the time of visit there was none of these so the town was quite empty, with most people I saw not being tourists. Nevertheless parking during the siesta time (2~4pm) was free just 10 minutes away from the museum which allows for a nice stroll through old town.

The museum is not expensive and was dead empty. It has a lot of info on several underwater heritage with the first panel already giving detailed information on the the "UNESCO Convention on the Protection of the Underwater Cultural Heritage". The text is available in a multitude of languages which again surprised be a lot. As mentioned before, the Mazarrón II is covered with sheets and the process for covering is detailed here too. The Mazarrón I is on display, or a copy I think, but the state of both vessels are pretty poor after being in the water for so long. The shards of wine vases found in the wrecks are more interesting to point out the trade done between the other states.

With around half the museum dedicated to underwater heritage, the rest of the museum is still very interesting regarding trade in general but the shipbuilding and navigation is less to the point of the WHS potential. I suppose I did have fun learning to tie knots like a seafarer. I recommend the museum and I'm glad I sought it out as part of this TWHS. 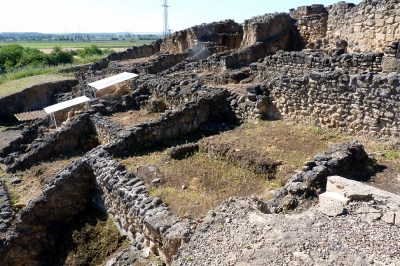 Whilst planning a trip to Andalusia in May 2018, with the primary objective of revisiting its WHS, we took the opportunity to dive into the further reaches of its T List as well. Towards its end I came across one titled “The Wine in Iberia”. This had only been added 3 months earlier in February - might that mean that it was being actively progressed for inscription? But the title didn’t particularly “enthuse” with the mental picture it conjured of yet more fields of grapes to add to the many already inscribed or on the T List!! In fact, in this T List entry, Spain has hit upon a different “take” on the viticulture story - this one doesn’t have a vineyard in sight and claims its value from the “Archaeology” of viticulture and winemaking in Spain – particularly in relation to its introduction from the Eastern Mediterranean by the Phoenicians around 7th C BC.

2 of the 4 locations as shown on this Web site’s map were close to our route from Jerez to Gibraltar so we decided to take in one of them - the romantically titled “Castillo de Doña Blanca”. This web site contains an “advisory” on its T List Maps - “The coordinates shown for all tentative sites were produced as a community effort. They are not official and may change on inscription”.  The Castillo was shown as being located in the “Ecological Park” of the town of El Puerto de Sta Maria. Incorrect I am afraid! Luckily I always double check map locations, whether T List or even inscribed sites -  UNESCO can also get their coordinates wrong! In fact a few Web searches discovered “point of interest” markers for  “Torre Castillo de doña Blanca” and “Yacimiento Fenicio doña Blanca” around 12kms away from the Ecological Park at 36.628126, -6.161528.

We arrived to discover a properly organised and fully fenced archaeological site with free entry and no other visitors. A circular path led past excavated archaic walls, a 20th C reconstruction of a 15th C tower after which the site was named and a building covering a deep excavation which apparently was used to establish the full chronology of the site across all its strata. The extended period of use had created a “Tell” with multiple layers of occupation. Notice boards (solely in Spanish) explained a history which reached back to the 8th C BC (Late Copper Age) through to the 3rd C BC and occupation by both “indigenous” inhabitants (Identified as the “Turdetani”) and Phoenicians. Below the hill on which the site was located was flat land stretching to the modern port of Cadiz - it appeared that the site had in fact been a port before silting/water level changes. Further round were excavated streets and houses and a Necropolis described as “Las Cumbres”. Notices described a winery and evidence of “Grape treading” – but these were not particularly visible to us (probably under the covers in the photo?). We extracted what value we could from the notice boards and my limited Spanish – photos of every board have enabled more “value” to be gained “back home”! Also from this Spanish Wiki article .

But what of the placing of this site on Spain’s T List? We went to the administration building within the site to try to discover more. One of the staff there spoke quite good English but none of them had heard of anything about UNESCO or “Tentative List” in relation to the site!!! It is amazing how often managements fail to communicate with their employees. These weren’t “uncaring” staff  and were clearly proud of their site, its history, its condition and its educational role - but, in far away offices, management was just not “engaging” with its workers. An all too common situation around the World. unfortunately.

So, how did this site come to be on Spain’s T List and what might its chances be? Currently it consists of 3 elements spread across 3 Spanish “Autonomous Communities”.

a. In Valencia - A series of ancient “Wine Presses” situated in the Requena-Utiel region.
b. In Murcia - 3 Phoenician shipwrecks from 7th C BC (2 off Mazarron - 1 of which is now in a museum and 1 off Bajo de la Campana whose artefacts also appear to have been fully excavated)
c. In Cadiz – Castillo de dona Blanca and the necropolis of Las Cumbres (I think that this location is also wrongly shown on our maps and actually lies on the hill immediately behind the Castillo site)

A strange mixture – the wrecks are certainly of interest for the picture they provide of Phoenician trade but the findings from them are not particularly related to “Wine”. And of course they have already been significantly excavated/lifted so can the locations where they “went down” really be considered significant in terms of possessing OUV?

It is great to hear that even the most committed of Wine Regions may be coming to accept that there isn’t room for any more on the List. And the idea of a site related to the archaeology of Wine is intriguing but it wouldn’t seem to me that the 3 disparate sets of locations which currently make up this T List entry are strong enough to make a sustainable case! As for Castillo de dona Blanca – well it is worth a visit if you are passing in order to “fill in” on an interesting aspect of early Iberian history but I wouldn’t go out of my way for it!