The Turf House Tradition is part of the Tentative list of Iceland in order to qualify for inclusion in the World Heritage List.

Map of The Turf House Tradition 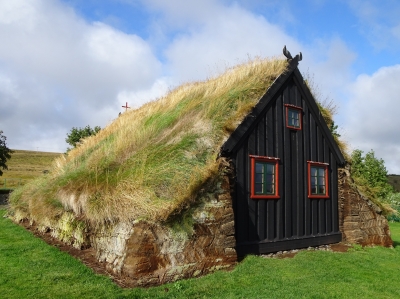 Turf houses were actually the primary (and almost solely) form of housing in iceland from the viking ages till the 19th century. Trees and timber were in very short supply in iceland. Turf houses have only a light wood framework, the roof and many walls are made out of turf blocks. Turf houses have the advantage of a good isolation, but are difficult to maintain and could only be built to a certain size - which is why even bigger turf buildings are an aggregation of relatively small huts. Turf houses only last for roughly a century, which means that all of the islandic turf houses are no older than the 19th century. Many of the buildings are mentioned in older sources, but were rebuilt again and again throughout the ages. It is not really known if the existing turf houses look like the ones in medieval times, but no fundamental difference is assumed.
So what is it like to visit these houses ? Quite a nice experience, I must say, and a nice change to all the overbearing landscape in iceland. Of the roughly a dozen buildings in the proposal, I visited four locations, all of which where quite easily reachable by car from the ring road. In fact, there were so close to the road that it is surprising that they are not featured more prominently in travel guides for iceland. Some notes on the individual houses:

All in all, I am quite confident in the OUV of the proposal, as the turf houses seem to be typically islandic, but are getting rare today. No similar structures are on the list yet. The constant need for renovation and rebuilding might be a hindrance, and the particular selection of the houses in the proposal is debatable. I could not see much difference between WHS and non-WHS turf houses. Still, the proposal is a strong contender for a worthy WHS in my opinion !
Visited in September 2018.
Importance 3/5 Beauty 4/5 Uniqueness 4/5 Environment 4/5 Experience 4/5