Sites of Great Moravia: Mikulcice - Kopcani is part of the Tentative list of Slovakia in order to qualify for inclusion in the World Heritage List. 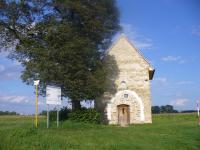 Considering the pivotal position of Great Moravia in the Slovak nation building I assumed that St marguerite chapel would be a very wll kept up site with student groups flocking to see the oldest staning building of their nation. The reality is far from it.

Kopcany is not far from the north-south motorway and only 64 kim from bratislava We approached from the other side, coming home (to Hungary) from the Czech Republic. It is quite easy to find the village, and the chapel is wll signposted. Coming from north we had to turen right. For quite a surprise the tar road ended u pin a signboard that was clearlx showing the way to a dirt road. As it was a sunny summer day, it was viable with a normal urban car. (But was not easyí at all.) The chapel itself is quite int the middle of onwhere. It is a little humble and seemingly very old structure, with all the characteristics of the cantral Europen Romanesque stile.

It is open only for occasional services, so the visitors can see the interion only through hte keyhole, or a gap ont he door. It seem to be quite uninteresting.

So if you are ont he motorway, on a sunny day, it worth a small detour, but do not try to go there in autumn or winter. 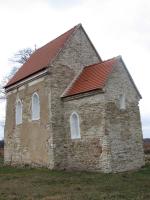 During the winter of 2006 we went from our house in Brno by car just 70 km to Slovakia passing the border at HodonĂ­n to take a look to KopÄŤany. It is a small village of a couple of houses quite in the middle of nowhere. We knew the Saint Margaret's church was located to the north of it and soon we saw it in the open countryside quite far and wondered how to get there. But then we noticed along the road n. 2 some signboards indicating where to go bringing you through the central street of the village to the beginning of an unsurfaced road which looked quite in bad conditions but however seemed practicable.

And then it became a terrible adventure! After the first bend the narrow road began to be covered by mud and puddles. It was clear that it was impossible neither to turn the car nor to stop because otherwise we would have gone blocked in the mud. It was quite a terrifying thought but however we also had to go very slowly because otherwise we would have slid out of the road. We covered about 2 km scared as if we were watching a horror movie but - I donďż˝t know how - we succeeded and arrived to the church, even if maybe we were more worried about the return (in the end fortunately we did it again) than interested in the visit.

The church looks much as a common and typical countryside chapel: it is a quite small (9 x 5 m) and unattractive grey building with a single nave, a rectangular apse, a door and some windows. From a gap in the door you will see just nude walls in the interior and all what is needed for the internal reconstruction of the building. Nothing else to see for a common visitor!

However what really matters here and what makes it incredibly important is that it is the most ancient standing building of Slovakia and not only, dating to the 9th century, the only preserved building of the ancient state called Great Moravia (and as such it deserves the WH status). It was reconstructed in the 13th and 15th centuries and strangely only in 2001 it was discovered that the church was very ancient but initially it was thought that it was Romanesque. However only in 2004 three Great Moravian tombs were discovered near the church (today nothing apart from it is visible) and it was assumed that also the church was so old and then it was restored to its original appearance. It was part of the MikulÄŤice agglomeration in today's Czech Republic and it is strange to think that when MikulÄŤice entered the TL in 2001 this church was absolutely unknown and today it is together with the Czech locality part of the candidature for 2009. MikulÄŤice is located just 1,5 km from the chapel on the other side of the Morava river which marks the border of the two countries and the construction of a pedestrian crossing is planned to link the two components of the newly constituted archaeological park (today you must drive for 20 km to get to KopÄŤany from there).

See also my review of MikulÄŤice for my visit of it and considerations about the overall archaeological park.