Sea of Galilee & its Ancient Sites

Sea of Galilee & its Ancient Sites is part of the Tentative list of Israel in order to qualify for inclusion in the World Heritage List.

Map of Sea of Galilee & its Ancient Sites

My dad had always had this question about the Bible: Why is it that the Sea of Galilee, being a relatively small lake, have such violent storms for Jesus to calm? Well, in April 2018, my family and I experienced those storms first hand. The night before, we had checked in at the Pilgerhaus, literally a pilgrim's inn founded and run by German missionaries. The next day, our packed itinerary indeed included important pilgrimage sites, notably Capernaum and the 2 old churches in Tabgha. We were, however, in for a bit of a surprise.

As afternoon came, the sky started turning brown and orange, and the rain started pouring heavily. Brown rain. Staining the car's windows and my raincoat. We were in for what the locals called a "dirty rain", which occurs when storms coming from the Red Sea pick up dust from the Negev Desert. The heavy rain and strange color of the whole place was accompanied by strong winds. I nearly had my raincoat ripped off me! It was then that it occured to us just how crazy the weather can get at this lake.

The Sea of Galilee is located in the Jordan Rift Valley, and it's fed and drained by the Jordan River. It's over 200 meters below sea level, which makes mere hills (in relation to sea level) appear quite tall, especially the Golan Heights on the other side of the lake. I reached the lake at 2 sites, at the shores near Pilgerhaus and at the Mensa Christi Church in Tabgha. From Pilgerhaus, a short trail through the bush (full of spiders, by the way) leads to the lake. The water there was quite shallow, clear, and home to some small fish. The Mensa Christi Church, better known as the church of St. Peter's Primacy, is at the town center of Tabgha and right next to the shore. It seems quite new, but contains the rock upon which Jesus is said to have entrusted the Church to Peter. Nearby is the Church of the Multiplication of Fish and Loaves, famous for its exquisite floor mosaics. A few kilometers up the shore is Capernaum, home to the Roman remains of the synagogue where Jesus once preached and Peter's house.

The UNESCO document for this T-list site seems to say that the site would consist of the lake itself, for its natural values and religious symbolism, and the sites of Tabgha's Church of the Multiplication, Capernaum, and Korazim, which I discussed (quite optimistically) as one of the Early Synagogues T-list site. The lake is indeed a natural oddity, being located in its unique seismic and topographical setting, and it's home to a diverse population of fish, some species of which being endemic. While I'm not sure how exactly that fits in the natural criteria, it's an important pillar in the nomination, not unlike the situation of Lake Ohrid's historic monuments.

As for the cultural side of things, I think this is exactly the Biblical Galilee site the list needs. Unlike "The Galilee Journeys of Jesus & the Apostles" site, each of the historic sites chosen contains remains either from Jesus' time or from the following Christian Roman and Byzantine times showing the effect of early pilgrimage in the area. Perhaps Magdala and Bethsaida would make good additions to this, though unrelated sites like Tiberias, Horvat Minnim, and Hamat Gader would overcomplicate and take focus away from the core of the significance here. Furthermore, the Sea of Galilee itself acts as a unifying element between these sites, forming a coherent cultural landscape, and indeed one with great religious and historic significance that is concretely shown by the different sites around the lake. While some sites have slightly doubtful integrity (lookin' at you, Capernaum Church), and the nomination reasoning needs a lot of work, I think it's clear what needs to be focused on here. This should make a worthy cultural WHS, and maybe even mixed if more information can be supplied on the natural aspect of the lake. Overall, I definitely enjoyed my journeys around the Sea of Galilee, and I believe in its worldly significance as a cradle of Christianity, as well as having experienced its natural phenomena first-hand. 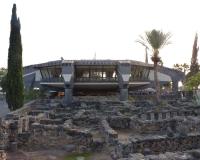 As Assif indicates in his earlier review, the extent of this site in relation to others on Israel’s T List is not clear. Among other mentioned sites, we visited that of Capernaum and I will limit this review to it. Now, the ancient site of Capernaum features in the descriptions of 3 of Israel’s T List sites. This one, the “Galilee Journeys of Jesus” and the “Early Synagogues in the Galilee”. Whether it would ever be intended to appear in 3 different inscriptions if Israel should be so lucky I know not.

First a warning – our National Parks Pass included entry to somewhere called “Capernaum”. When we reached the approximate area for the site as marked on our map, we gaily drove until we saw the National Park logo/sign for “Capernaum” and drove into a large car park with paths leading down to the lake – and it was all “free” even without a pass!! However, after some wasted time wandering about but finding nothing of relevance we contacted an NP employee to discover that this was the wrong place! As the NP Web site for “Capernaum” states “The main area of the national park, which covers approximately 80 dunams (20 acres), is northeast of the antiquities site. The INPA has prepared the area to assist and complement the visit to the antiquities. The national park will become part of the new promenade, 3.5 km long, which connects Capernaum and Ein Sheva (Tabgha). A dock has been built near the antiquities site, which allows visitors to sail to Capernaum from Tiberias and Ein Gev”.

The Antiquities site we were looking for was around 1 km south and in fact is not owned or run by the NP at all but by Franciscans – see later how this happened! As our NP pass wasn’t valid we had to pay an entry fee - but this was a remarkably small 3NIS pp. Even better it didn’t keep the ridiculously tight opening times of NPs and was open until 4.50 (last entry 4.30)

What we had come to see were the ruins of a fishing village dating originally from around 200BCE Surprisingly, it wasn’t discovered until 1838, after which a series of excavations took place through the 19th Century. Along the way the Franciscans bought the land from the Bedouin – and own it to this day. 2 overlaid synagogues, with the first dating back to the 1st century, were uncovered and presumably would be the inscribed aspect of any nomination as part of the “Early Synagogues of the Galilee”. Interestingly, the later synagogue (4th/5th C CE) is signed as being “Built over the Synagogue of Jesus” – a reminder that this is a site run by Christians primarily for Christians but also of course that Christ was a practicing Jew. Further excavations, through to the 1960s, uncovered the remains of a Roman town. Then, most significantly, came the identification of a series of early Judeo-Christian churches with, finally, under them all - a house from the 1st Century CE. This, it was/is asserted, was the house of St Peter – the significance of this was that Christ is believed to have stayed there and lived at Capernaum where he met his disciples and carried out his “Ministry”. In the half century after the crucifixion the central room of this house “had been enlarged and embellished. (This it was believed was the room)… used for the gatherings of the first Judeo-Christians, in which Christ’s presence in Peter’s house was commemorated; the place itself where, according to the Gospels, a number of miracles took place”. Later on the room was developed from a place of domestic worship into a series of ever larger octagonal churches through to around 5th Century. The net result of this “discovery”/interpretation was the development of Capernaum as a significant place of pilgrimage in the Holy Land.

This has resulted in the construction of a rather strange church on the site, which was opened as recently as 1990. It “hangs” on 8 legs directly above the original octagonal church – with its single hall rather like the body of a spider supported by the legs (photo). Thus its construction in no way damages the original remains. The main hall has a rectangular glass-covered opening in the centre which looks straight down upon the original church. The concept was “interesting” but I can’t say I liked it – it is not, to my eyes particularly pleasing and “hangs” very low over and dominates the original remains in an unfortunate way. But it and the adjacent Synagogue were incredibly popular with the arrival of a constant stream of coach parties. During our trip around the early Christian remains of the Holy Land we became rather sceptical about the authenticity of many of them. Right from the earliest start of pilgrimages from Rome around the 4th C CE it has been “necessary” to “discover” places directly related to New Testament events, the Crusades provided another stimulus as did the 19th and 20th centuries. The fact that some events have contending locations (with the Orthodox churches often seeming to be the ones with the alternative views!!) doesn’t exactly add credibility to the assignments. Whatever, the fact that this location was believed to be the location where Christ had met with Peter et al was clearly of great religious moment to many of the visitors. Even if you don’t share their views it is an interesting place to visit and should (with its Synagogue etc) figure in any “Galilee-related" nomination(s) which might emerge.

I cannot find out what exactly the proposed area should include. The Sea of Galilee, regardless of its Chritsian holy status, is indeed surrounded by numerous ancient sites. Their intergrity is questionable though, mainly due to the fact that some of the territory (the Golan hights) is internationally considered as an occupied Syrian territory. On the Israeli (internationally recognised) side several sites (Capernaum, Hurvat Minnim, Hammat Tiberias) are already proposed under other titles (ancient synagogues, Christian pilgrim routes and Hurvat Minnim respectively).

Tiberias is now a modern town, its historic Mamluk-Ottoman centre having been almost completely demolished by the Israeli army during the 50s. Whatever is left of it is far from impressive and lacks integrity. New excavation of Roman Tiberias are underway at what is now called Barko Park. There is not much to see there yet. Nearby Hamat Tiberias offers a nice synagogue mosaic, but it is not mentioned in the description.

Capernaum is a popular pilgrim site and boasts a magnificent marble synagogue as well as the remains of a Roman settlement. Tabgha features two churches with archaeological findings - the mosaic of the Bread and Fish is the better known of the two. There is now a scenic walk along the shore connecting Tiberias and Capernaum passing through Tabgha and Hurvat Minnim.

As you can probably sense reading my review, I cannot really grasp the unifying element that would justify a common inscription of the sites, but maybe a more detailed description would shed some light how this could be argued. Notwithstanding, the fact that the lake is a source of a political conflict could probably suffice to exclude the site.