Roșia Montană Mining Cultural Landscape is part of the Tentative list of Romania in order to qualify for inclusion in the World Heritage List. 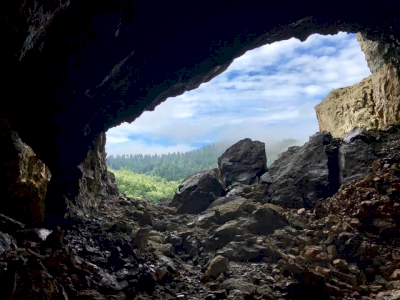 In my opinion this is one of the most dramatic natural and man-made landscape in Romania! Underground and open mine sites, artificial lakes, old houses and roads, industrial monuments hidden in the forests, beautiful nature, lots of walking paths through abandoned industrial scenery, history that started before the Romans came in, and that continues to our time. Two days is not enough to discover all that. But in my case, it was not about discovering gold mining history of the region, but enjoying the breathtaking beauty of the area. Be prepared if you decide to take Roşia Montană village as you base, because the tourist infrastructure in here is not very well developed; there are some places where you can spend a night or two (in old houses, of course – you’ll have a chance to see how the wealthier ones used to live, i.e Casa Petri), only one store, and no restaurant at all (there are two or three local ones and bigger shops in Dăroaia/Coasta Henţii, 3 kms to the west).

Some archaeological findings prove that gold mining in this area started well before Romans. While visiting the Roman mine you’ll hear that the gold of Thracian kings came from this region. And the Romans developed mining to the point that today the underground network of tunnels is the most extensive ever created in antiquity. Ancient dwellings, cemeteries, mine galleries, lots of artefacts, wax tablets among them – all that come from the most ancient times. And all can be seen or visited while in Roşia Montană. But this is only one part of gold mining history. Remains from Middle Ages, Austrian Empire, communist times – all is there! Different methods of mining, different tools and machines, open pits, cave-like mining corridors (photo), very rich urban planning, very interesting small architecture, including churches, bridges, villager’s houses, storages, corporation buildings, even blocks of flats from 60…

And the nature, omnipresent nature. Where green plays with earth colours. Forests, lakes, mountains, hills… (And Cariera Poieni which probably won’t be in the core zone).

And the very difficult question: to keep on exploring (RMGC) or preserve this landscape as it is?