Mujib Nature Reserve is part of the Tentative list of Jordan in order to qualify for inclusion in the World Heritage List.

Mujib Nature Reserve comprises a river canyon (wadi) system which enters the Dead Sea. The reserve consists of mountainous, rocky, and sparsely vegetated desert, with cliffs and gorges cutting through plateaus. It supports a wide variety of plant and animal species, and is an Important Bird Area. 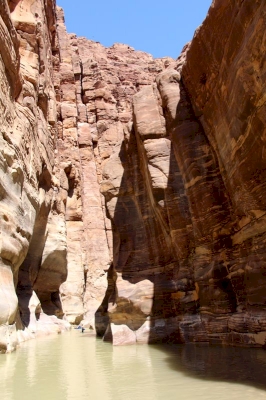 I did not know what to expect when I haded for the Mujib Nature Reserve and ended up having a lot of fun.

The reserve is located just at the street along the dead sea, around 45 mins by car from the Baptism Site WHS. There is a car park and a visitor center called "adventure center".

The adventure turned out to be my first canyoning experience. th only way to explore the site is to walk up the gorge inside the river. Along with the entrance fee I had to rent a life vest and a waterproof bag for my camera. It was not cheap (31 JOD), but worth it. I was totally unprepared, so I just entered the river in my underpants. Bring a swim suit. I also recommend renting shoes. I went bare foot and the rocks were tough on my feet. It's a major tourist attraction in the region, so there were loads of other people.

The water level was mostly low, but has several deep parts that require swiming and rocks that require climbing. The cenery is beautiful, with fantastic rock formations. I ended up spending more than 2 hours in the canyon, scratching another TWHS from my schedule.

It was great fun and I can totally recommend visiting the reserve. Not sure about the OUV though. The focus on the nomination lies on the fauna the is found in the higher altitudes of the reserve and would probably need a longer hike and lots of luck to experience.