Las Pozas, Xilitla is part of the Tentative list of Mexico in order to qualify for inclusion in the World Heritage List. 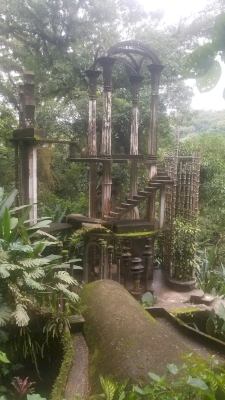 A bit off trek but on the way from the Franciscan Missions towards El Tajin, and totally worth it. It is also really popular. I took more pictures here than ANY other place in Mexico but it also took effort to have nobody in the frame, especially with Mexican kids splashing in the water. If you want to get close to the El Waterfall you either take off your shoes, prepare to get wet or buy booties in the shops before you enter the gardens.

If you try to imagine this is an ancient ruin with unknown origin and you would think it's a mysterious place ranking among the Mayan ruins. Alas it is not. Somehow inspired by Dalí and you can imagine what it is like. Art overgrown by jungle. In another example, have you been to Siem Reap and how the "Tomb Raider" temple gets a lot of attention and is very photogenic? So then you should understand that every corner he is just asking for a picture.

Edward James created a very unique place and I believe this should be part of the world heritage. I think it also reaches beyond what you see here as the park is apparently 80 acres with a sign stopping you to explore the rest of the garden because there is no security. The park is in the forest and wild animals could probably mame you (leopards?).

Is the park actually complete to the artist's intention? I didn't have a guide, incidentally there was a group of foreigners with a guide so they are available. I don't think I need a guide to experience the place but that would be something to ask. The The House on Three Floors Which Will in Fact Have Five or Four or Six is basically Solivagant's unfinished house in Sherwood Forest now overgrown with ferns, moss and ivy. Staircase to Heaven is also just that, staircase going up in an unfinished house. This only works in the setting here with the slightest decoration because if you have it somewhere else it's just "unfinished house waiting to be demolished" by artists called Mexican Builders.

Nevertheless you can see a lot here. It was rainy which is probably common and steps can be slippery. With an entrance of 100 pesos you are also looking at more than the usual ticket price. There are lots of hotels in the area to park and walk over (or taxi if you find the hill a bit too much but the last section is actually annoying to walk so if the taxi drops you off at the garden entrance you save some muddy shoe cleaning and miss out on trinket shopping).

Lastly I think this place will start to need a lot of maintenance in this setting but for now it seems almost original. 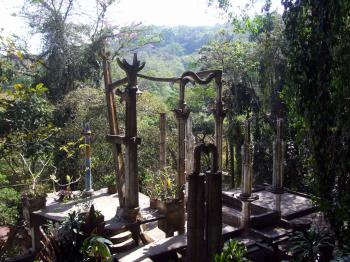 Las Pozas at Xilitla is a bit of a surprise entry onto Mexico’s T List – A “Wilderness Sculpture Garden” in the form of the surreal “architectural ramblings” set in a sub-tropical Mexican rainforest and created during the mid 20th Century by a rich and eccentric English poet and art patron. It has been described somewhat grandiloquently as “one of the biggest and least known artistic monuments of the 20th century”, as “a spectacular marriage of nature and art.” and, more prosaically, simply as a “Folly”! So, love it or hate it, it seemed worth taking in as we passed by in 2008 when traveling between the Sierra Gorda Missions and El Tajin.

If you are thinking of visiting then it is important to read up beforehand on the history of the man who “created” it - Edward William Frank James (1907–1984). Without this background the whole place could seem even more meaningless than it might still seem if you have done the reading! There is plenty on the Web about him so I won’t fill this review with much detail – suffice to say that his personal contacts included Magritte, Dali, Brecht/Weill, Evelyn Waugh, Aldous Huxley, Balanchine and the Mitfords. He inherited great wealth from his Liverpool based American father, increased this by creating a valuable collection of early surrealist art and, between 1949 and his death, blew cUS $5 million of it on Las Pozas! It might also be of interest that, in 1959, James was involved in the campaign to help preserve Watts Towers.

We gave the place around 2 hours – you might get by with a bit less but it is quite difficult to reach, so you might as well spend reasonable time there. In early 2008 the place looked a bit “down at heel” but, since then, great changes have been afoot so any information on costs/visiting hours or general condition are likely to be outdated. Because of Mexican laws regarding foreign ownership of land the property was never actually owned by James but was held on his behalf by his local partner and lifelong friend Plutarco Gastellum. He was also the man who actually turned James’s fantastical ideas into “concrete” reality. His children had been adopted by James and they inherited the place. One of these, “Kako”, ran it after James’s death until just before our visit but appears to have been struggling financially since the will didn’t provide the means to maintain it. The state government took an interest in ensuring the site’s preservation and in 2007 it was sold to a consortium - “In 2007 "Fondo Xilitla" acquired Las Pozas, with the purpose of conserving the magnificent sculptures of Edward James and to protect the surrounding land and gardens. "Fondo Xilitla" was created by the Pedro and Elena Hernández Foundation, one of Mexico's best known and most active charitable organizations, with support from the government of San Luis Potosi and CEMEX, the worldwide cement and infrastructure company. Fondo Xilitla is a non-profit charity in Mexico.” But this quote provides an “alternative” take on the deal - “a consortium of investors is banking on the importance of James’ artistic legacy. More than two decades after the artist’s death, the site has been bought for $2.2 million USD by the Xilitla Fund, set up by billionaire ex-Banamex CEO Roberto Hernández and his wife Claudia Madrazo, and chaired by British-born UBS economist Damian Fraser. For Hernández to convince fellow billionaire Lorenzo Zambrano of CEMEX to join the project was easy. “This is the largest open-air cement sculpture park in the world, and CEMEX is one of the world’s largest cement companies. It was a natural complement,” !!

And this consortium thinks BIG –“Since the sale, the San Luis Potosí government has recognized Las Pozas as a patrimony of the state, the Fund’s key first achievement. The next goal is status as a UNESCO World Heritage Site … Five million USD are earmarked over the next five years, for restoration of the works, revitalization of the gardens, and international promotion of Las Pozas as a “high-quality ecological and cultural destination”. (source - www.xilitla.org/database/currentmedia/files/8.pdf

In 2010 the site was placed on the WMF “watchlist” and, from what I have read, restoration appears to be progressing well. Whether the “promotional” objectives will ever be achieved is another matter…!

The “Cement” reference is highly relevant. Among the hills, waterfalls and foliage of the site there are some 36 concrete surrealist structures – hardly any of them actually “finished”! Exploring each of them is an adventure as you climb stairs to nowhere, face doors which can’t be opened look at columns which hold up nothing and come across “a concrete bed shaped like a tree leaf where James used to meditate and prepare for death”. Names given to the structures include “The House with Three Storeys that could be five”, “The house with a roof like a whale” and “Column of the Stegasaur”. So, if Fondo Xilitla gets its way and the site is nominated one day for “World Heritage”, are ICOMOS etc going to find OUV there? I find it very difficult to say - I certainly enjoyed my visit but is the creation just too “way out” and James just too inconsequential a figure despite his famous “connections”? On the other hand, “Surrealism” isn’t really represented on the List beyond some aspects of Gaudi I guess – Parc Guell is perhaps the nearest to Las Pozas I can think of (along with Watts Towers) but Gaudi of course had other claims to fame as well. Perhaps all I can say is that, if Las Pozas were to succeed, I wouldn’t be arguing against!

During my 2 days trip to Sierra Gorda de Queretaro, I've managed to take the 1,5 hours driving from Jalpan to Xilitla, where out of the village and apparently in the middle of nowhere, you'll find the entry to Las Pozas. The gardens are open every year and there is a small entry fee. The main "palace" is very close and visible from the unpaved dirty street you have to take in order to get to Las Pozas (it may become particularly hard to drive, after a rainy day (luckily it wasn't out case). The gardens and concrete structures are well integrated into a main surrealistic environment, many of the concrete structures are just "useless" and just for beauty, mostly representing flowers or bamboo. Particularly remarkable are the "stairs to nowhere", with no handrail and scary to climb (luckily the scariest steps where closed, in order to mantain the integrity of the structure). It took little more than an hour in order to visit Las Pozas, it wasnt crowded when we were there on a Monday morning. We could have stayed longer and seim in the pozas just down a spectacular waterfall, but we left the swimsuits in the car and the water was not as warm as in other places of the Sierra. All in all, a worthy detour if you plan to visit Sierra Gorda and have an overnight stay in Jalpan