Koloniën van Weldadigheid (agricultural pauper colonies) is part of the Tentative list of Belgium in order to qualify for inclusion in the World Heritage List.

The Colonies of Benevolence comprise the 19th century agricultural pauper colonies of Merksplas and Wortel. They were part of a social experiment to relieve people from poverty. It also resulted in a redesign of the landscape.

Map of Koloniën van Weldadigheid (B) 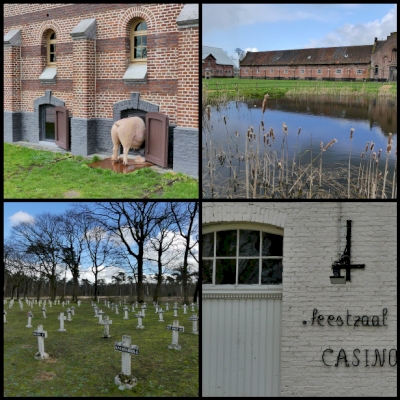 In March 2020 I visited the Belgian locations of this transnational tentative WHS nominated by Belgium and the Netherlands. From a visual point of view, what I experienced was a similar landscape of Beemster or the Par Force hunting landscape with a hint of the Belgian béguinages. The central focus of this tentative nomination is not religious though, it's agriculture.

Around 1818-1825, when Belgium and the Netherlands formed the United Kingdom of the Netherlands, Johannes van den Bosch put forward the idea of fighting poverty with agriculture which gave way to the construction of 7 agricultural colonies. There were so many paupers or vagrants at the beginning of the 19th century, that their size was that of sizeable hamlets or villages with their own chapel or church, pond, cemetery, housing and even their own mint.

The Merksplas colony, the last pauper colony built in 1825, was the only farm in the region to have more than 100 hectares of farm land. It also had a very large pigsty for as much as 95 pigs, which has recently been converted into a free informative visitor centre (top left photo). The various videos in Flemish with English subtitles were fundamental to help give context to the information I read in the nomination dossier. I parked my car for free at the parking lot near the huge church which has been converted in a prison museum. From Merksplas, I headed to my next destination, the Wortel colony built in 1822. On the way through tree lined avenues, I stopped by the Merksplas colony cemetery with several nameless white crosses.

After visiting the Merksplas cemetery, driving towards Wortel, keep your eyes peeled for a small brown sign pointing towards the Wortel colony which on my GPS seemed to be closer to Staakheuvel than modern Wortel. On the way to the colony, there are another four entrance signs (Ingang 1-4) and a white painted building with a green statue surrounded by a tall see-through black fence. I followed a car heading towards a small parking lot and followed an old chap inside what I thought was the Wortel colony visitor centre. When I was asked to hand over my personal belongings, to my surprise I found out that in fact I was visiting a fully functioning prisoners' facility! So I quickly headed back out, drove away from the parking lot and drove further on to another much bigger parking lot with a rusty metal sign of the Wortel colony like the one in Merksplas.

After a stroll around what is now the Casino Feast Hall (bottom right photo), I walked in the 'Klapekster' Nature point, which is a series of colony farmhouses, each with plots of farm land which once made up the free agricultural colony of Wortel. Poor families lived in these separate farmhouses which now house different farm animals. The most unique of these farm animals were the Konik or Polish primitive horses which I never saw before. Next I explored part of the mountain bike routes on foot. With the Natuurpunt behind me, I walked straight ahead and then turned on the left towards the Wortel colony cemetery (bottom left photo), which is similar to the one of the Merksplas colony. The only difference is that it has a brick gate and the white crosses have black wooden name tags on them.

The other 5 colonies in the Netherlands, are the ones in Fredriksoord and Willemsoord, the first ones founded in 1818-1820, Ommerschans (1819), Wilhelminaoord (1821-23) and Veenhuizen (1823). This tentative WHS which is up for inscription this year, is meant to celebrate 200 years of colony life, from when they were founded in the United Kingdom of the Netherlands in 1815, to their use as colonies of benevolence in 1870 after the Belgian Independence in 1830 and after being sold in public auctions in 1846-1865, to the abolition of the law on vagrancy as late as in 1993, to the renovation projects after a protest in 2006 which have paved the way to the sites' nomination. Even though the OUV is not that tangible as very little remains inside the buildings, the layout and size of at least the Belgian agricultural pauper colonies is certainly impressive. That said, I'd be very surprised if this transnational nomination doesn't make it on the WH list. 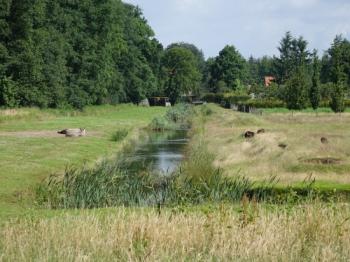 Between 1815 and 1830, the current states of the Netherlands and Belgium were united for a short period in the ‘United Kingdom of the Netherlands’. They are now working on a joint nomination for 2018 to highlight a specific experiment of that era: the efforts of the so-called ‘Society of Benevolence’ to “improve the inhumane conditions suffered by many of the poor”. The Society established domestic colonies to reeducate paupers (tramps, orphans, down-at-heel families) by means of land reclamation and agricultural innovation.

The Dutch part of this nomination covers 6 separate locations in 3 clusters, all in the northeast of the country known at the time as the ‘Dutch Siberia’. I visited most of these already in 2011, when I did a whirlwind summer tour along the sites on the Dutch Tentative List. The best known of the colonies is Veenhuizen, a name tied to its large prison that can hold 1,000 inmates (nowadays filled for 25% with prisoners 'on loan' from Norway by the way). An impressive square former prison building holds the disappointing Prison Museum. Walking around town, the most remarkable sights are the edifying nameplates on the houses of the former guards. They hold slogans like "Order & Discipline" or "Work & Pray".

Last weekend I decided to visit the Belgian part of this nomination. It consists of two locations, Merksplas and Wortel, two villages just south of the Dutch-Belgian border. They’re not as remote as the Dutch sites, but driving along the cobblestoned access avenues does give you a feel that you’ll arrive somewhere special. Like Veenhuizen, Merksplas and Wortel still are known for their large and active prisons.

Beforehand I had downloaded a 11km long hiking route, aptly named "Escape Path", through Merksplas Colony. The trail starts at the former Vagrants Chapel, a recently renovated example of eclectic architecture. Roman-Catholicism was the only supported faith in this colony, in contrast to the north where there was 'freedom of religion'. I continued southwards, passing farm fields and following a soggy path through the adjoining forest. It was a very pleasant walk, the landscape reminding me of the area where I grew up in the east of the Netherlands. References to both World Wars are made along the way via a remembrance field of poppies and a memorial dedicated to a fallen British corporal.

After some nice small-talk with a passing shepherd, I ended up near where I had parked my car. I decided not to walk the northern loop of the trail, but to drive directly to the intriguing ‘vagabonds cemetery’. This consists of two open spaces in the forest, where 6,000 former residents were buried from the Colony Merksplas. They only received a simple cross with their number on their grave. Most of them are overgrown now.

The second Belgian location, Wortel, lies just 6 kilometers from Merksplas. The landscape is very similar: neat straight roads and farm fields, still in use. Only the buildings are painted white in Wortel. I found that there is less to see than in Merksplas.

This nomination has been in the making for years. The Belgians are still finishing the restoration of the large farm structures in Merksplas: they plan to be ready in Spring 2017, when the buildings will be transformed into a visitor & conference center.

So what will be the chance of success for the nomination? In 2015, the Dutch (who will lead the nomination) organized an ‘evaluation of experts’ to give their opinion on the draft dossier:

- They worried about the lack of evidence given of the material impact this colonization has had on nature, how to support the claim that this is a cultural landscape.

- Also, a more critical approach of this social experiment would be welcome in the dossier: in the end it was mostly a failure. And how would representatives of poorer countries react to this patronizing approach to eradicate poverty?

To elaborate on the second issue (and they did not foresee this in their evaluation): the former Dutch colony Indonesia will be one of the WHC members to judge. The man behind the Society of Benevolence, Johannes van den Bosch, later became Dutch Minister of Colonies where "he demanded increasingly high financial results from the colonies, often to the detriment of the interest of individual farmers and slaves." (wiki)

Life in the Dutch Pauper Colonies has been immortalized fairly recently in the popular family history Het pauperparadijs, a sad story about coercion, infectious diseases, taking children away from their parents and crop failures.