Baroque Churches of the Philippines (Extension)

Baroque Churches of the Philippines (Extension) is part of the Tentative list of Philippines in order to qualify for inclusion in the World Heritage List.

Map of Baroque Churches of the Philippines (Extension) 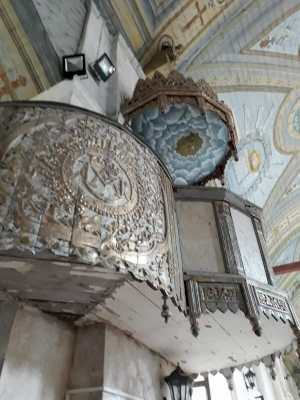 The Nuestra Señora del Patrocinio de Maria in Boljoon is one of many beautiful colonial churches in the south of Cebu. I made a "visita iglesia" down the south-east coast back in December 2017, and Boljoon was my final stop. When I made the final turn around Ili Rock, I was greeted by the fantastic view of the former pueblo of Boljoon, nestled in its scenic bay and narrow coastal plain with a backdrop of forested mountains.

The first thing that jumps out is the church, as I had seen many times before, but this time, I stopped the car and got down. The facade is noticeably simpler than those of the churches I had visited earlier, but don't let that fool you: this may hide what is by far the best preserved colonial church interior in the Visayas.

I enter thorugh the side via the museum entrance. A guide was provided, and he proceeded to tell an in-depth story of the church's history and present elements. He even went up to the choir to take photos using the geometric designs of the screen. The entrance, however, is free for the church. Overall, the administration is doing a great job keeping the church preserved and making tourist visits easy and educational with good guides.

Entering the church, the most instantly striking thing is the ceiling, intricately painted with flowing designs by native artists from around a century ago. The paintings are vivid, but not too bright to intrude on the solemn atmosphere of the church. They are also noticeably older and a tad more archaic than the paintings in the other churches of Cebu. Walking down the center aisle, the main altar (retablo) at the other end reveals itself from the darkness of its corner. It is another great highlight and unique element of the church, for it is the only church I have visited in the Philippines that stays authentic to the usage of the traditional techniques of applying the gold leaf surface. The side altars and the pulpit are covered in the same fashion as well. At the back, the choir screen above the main entrance shows Islamic influences in its design. The walls, of course, are still made of strong white coral stone, just like the facade.

As for its outstanding universal value, I think it truly deserves world heritage status over many other churches in the country and in the world. It is one of the best preserved, traditionally characteristic, and beautiful churches in Asia, and an exemplary showcase of the intermixing of colonial concepts and indigenous deliveries in architecture. It actually reminds me of the old churches in the Colca Valley in Peru because of the gold altars and indigenous influences. Every element of it, from the ceiling to the altar, and even the serene atmosphere, deserves preservation and recognition. To me, it shows more OUV than many sites, including churches, that are already on the list simply because it is the cream of the crop when it comes to the preservation of colonial art and architecture in Southeast Asia, especially considering that none of the Baroque Churches of the Philippines already on the list are coral stone churches.

Note: I haven't visited the other churches on the T-list, so hopefully this will be updated later on. 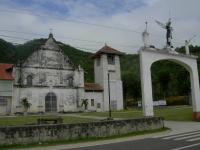 Five properties are nominated as extension to the existing four Baroque Churches of the Philippines. I was able to visit one under the tentative list ¨C the church complex of Boljoon, Cebu.

As stated on its nomination file, the Boljoon church complex prides itself for retaining original features ¨C the main church body, bell tower, cemetery, a school building, walls/gates and the convent which now houses an archeological museum. A few years back, skeletons and relics (Chinese plates and jewelry) were unearthed on the church grounds and this discovery lead experts to believe that the area could have been an ancient burial ground.

Local tourism bureau introduces Boljoon heritage walking tours. The tour features the church complex itself, a few heritage houses, a Gabaldon school, an old bridge and a watchtower ¨C personally, I think the last is yet another interesting theme: historians noted a certain Augustinian friar, Julian Bermejo who built a series of watchtowers for raids coming from the Moro south. These towers dot along the southern stretch of the province (about 90 kms) and need restoration and/or maintenance.