Bagçesaray Palace of the Crimean Khans

Bagçesaray Palace of the Crimean Khans is part of the Tentative list of Ukraine in order to qualify for inclusion in the World Heritage List.

Map of Bagçesaray Palace of the Crimean Khans 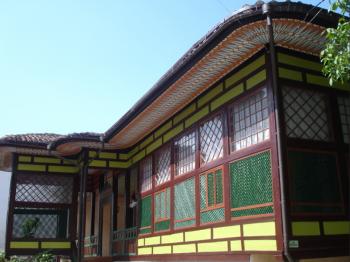 I took a bus from the Bakhchysarai train station to the Kahn's Palace.

The whole setting reminded me of the Topkapi Palace in Istanbul, although the palace design is somewhat different and is smaller.

A main difference is that there was a statue of Russian poet Pushkin who had visited this palace.

In the same surroundings there is a cliff monastery and Chufut-Kale, which is also part of this nomination. Chufut-Kale is basically a cave city, and I'm not sure how this cave city is related to another TWHS in Crimea called "Cultural Landscape of 'Cave Towns' of the Crimean Gothia."

This is an amazingly beautiful site with surviving buildings well preserved. Several buildings have rooms furnished in period style though mostly the rooms are empty. In my opinion it should be on the UNESCO World Heritage List on the grounds that it represents the architectural fusion of Middle Eastern and Tatar architecture. It is easily accessible from Sevastopol by road. Admission was not expensive.